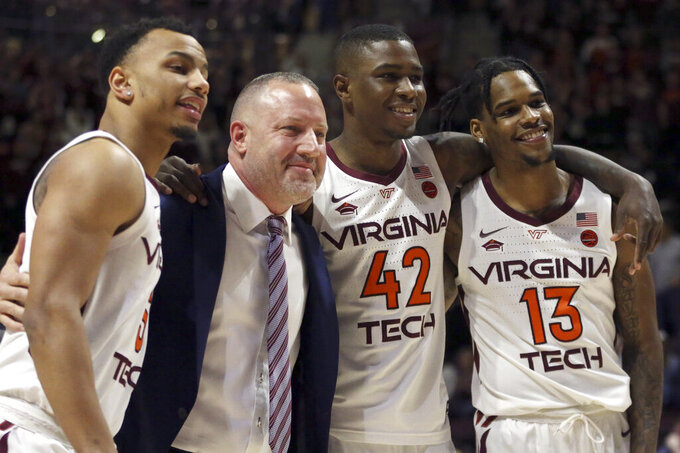 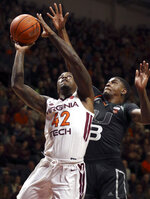 BLACKSBURG, Va. (AP) — In a pregame ceremony, the Virginia Tech recognized three seniors who arguably changed the fortunes of the program. Then, a sophomore stole the show.

Nickeil Alexander-Walker had 21 points, 10 rebounds and eight assists, and No. 15 Virginia Tech beat Miami 84-70 on Friday night to tie the school record for regular-season victories with 23.

Playing mostly at the point guard position, Alexander-Walker was 6 of 14 from the floor, including three 3-pointers, and grabbed 10 rebounds for the Hokies (23-7, 12-6 Atlantic Coast Conference). The sophomore also tied his career high with eight assists.

"It was all about our seniors," Alexander-Walker said. "The fact that I could be there for them was huge."

Ahmed Hill and Ty Outlaw had strong performances in their last home game for the Hokies. Outlaw scored 19 points, hitting five 3-pointers, and Hill added 17 points and connected on five 3s as well.

In addition to celebrating its seniors, Virginia Tech celebrated doing something that only one other team in school history had done — win 23 games in a regular season. The 2009-10 team won 23 games, but a soft nonconference schedule relegated that team to the NIT.

Virginia Tech trailed 16-8 before the Hokies found their shooting stroke and buried Miami, outscoring the 'Canes 32-6 over a span of nearly nine minutes. The Hokies hit six of their nine first-half 3-pointers during that stretch and scored on 13 of 15 possessions.

"The group I started in the second half has never played a second together," Miami coach Jim Larranaga said. "We were just looking for something that might create some mismatches for them. It kept us inching closer ... but then again we made some critical errors and missing some shots. We needed up not shooting the ball well from 3, and if we don't shoot the ball well from 3, we're going to have a hard time of winning."

Virginia Tech: The Hokies basically played their 10th straight game without point guard Justin Robinson, who has been out with an injured foot. Williams ceremoniously started Robinson in his final home. Kerry Blackshear Jr. took the opening tip and tipped it out of bounds, allowing Williams to substitute for Robinson, whom the Hokies hope to get back at some point this season. Robinson was averaging 14.4 points and 5.5 assists before the injury.

Miami: Lykes came into the game averaging 16.2 points per game and ranking in the top 10 in the ACC in scoring — and he finished right on that average. But the sophomore struggled from the floor against the Hokies, hitting just 5 of 15. He missed his first seven 3-point attempts, which was emblematic of Miami's struggles from the perimeter. The 'Canes made just six of their 29 3-point attempts.

Virginia Tech lost to Florida State in overtime on Tuesday in Tallahassee, Florida, which certainly is no shame considering the Seminoles' No. 14 ranking. So the Hokies figure to stay at or near No. 15 in next Monday's poll.