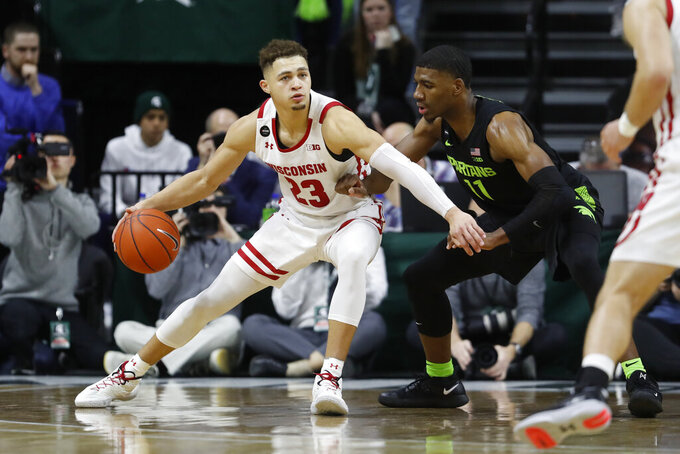 FILE - In this Jan. 17, 2020, file photo, then-Wisconsin guard Kobe King (23) is defended by Michigan State forward Aaron Henry (11) during the second half of an NCAA college basketball game in East Lansing, Mich. Former Wisconsin guard Kobe King has changed his plans and won’t be continuing his career at Nebraska. Nebraska coach Fred Hoiberg said in a statement Friday, June 19, 2020, that King had informed the staff that he wouldn’t be enrolling at the school due to personal reasons. (AP Photo/Carlos Osorio, File)

Nebraska coach Fred Hoiberg said in a statement Friday that King had informed the staff that he wouldn’t be enrolling at the school because of personal reasons. Hoiberg added that “we respect his decision and wish him the best in his future endeavors.”

School officials had announced on April 15 that King was coming to Nebraska.

King started his career at Wisconsin but left the program in late January.

The 6-foot-4 guard had made 19 starts and was averaging 10 points to rank second on the team at the time he left. He was averaging 12.6 points in Big Ten competition.