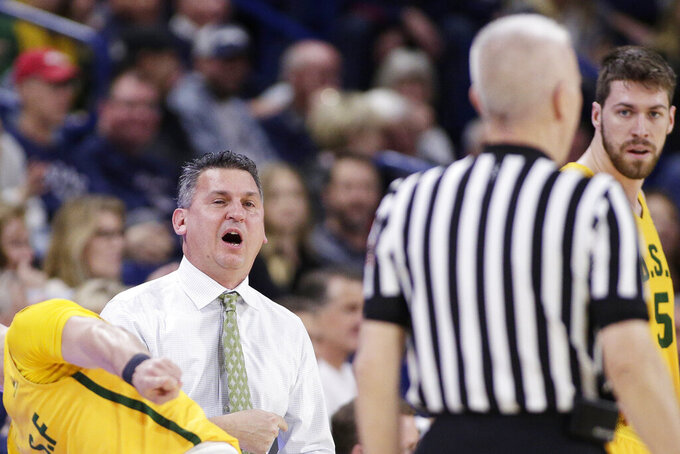 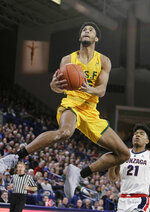 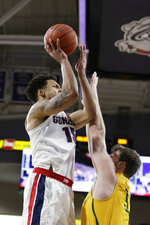 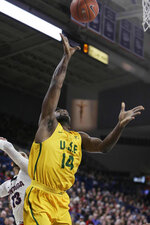 SPOKANE, Wash. (AP) — Fourth-ranked Gonzaga was clinging to a three-point lead over San Francisco late in the first half Thursday when someone flipped the switch on guard Zach Norvell Jr.

Norvell scored 13 consecutive points for the Bulldogs and launched them toward a 92-62 win over San Francisco.

"We got stagnant on offense," Gonzaga coach Mark Few said of the first half lull. "We made some real, real silly turnovers in the first half. We needed those shots to get us going,"

Norvell's streak seemed to ignite the Zags, who outscored San Francisco 49-32 in the second half to post their 13th consecutive victory.

"Things were going back and forth early on," Norvell said. "In the second half we were able to open things up. And we got stops in the end."

Brandon Clarke had 20 points, 16 rebounds and five blocks for Gonzaga.

"I played really hard tonight," Clarke said. "My teammates found me on my cuts."

Rui Hachimura added 17 points and Norvell finished with 16 for Gonzaga (22-2, 9-0 West Coast), which was No. 1 in the Top 25 until losses to No. 1 Tennessee and No. 8 North Carolina in mid-December knocked them down. Geno Crandall scored 12.

Frankie Ferrari and Charles Minlend each scored 14 points for San Francisco (17-6, 5-4), which has lost 16 consecutive games to Gonzaga.

"We competed well for the first 16 minutes," San Francisco coach Kyle Smith said. "We got into some foul trouble and that makes competing against a team like Gonzaga really difficult."

"We couldn't get any stops in the second half," Smith said. "They really pounded the ball inside and exposed us a little bit."

San Francisco was hampered by 38.8 percent shooting and 12 turnovers and lost its third consecutive game.

Crandall's 3-pointer put Gonzaga up 28-19, but the Dons scored the next six points.

Norvell scored Gonzaga's next 13 points, including a trio of 3-pointers, to lift Gonzaga to a 41-30 lead.

The teams traded baskets to open the second half, before Gonzaga went on a 21-7 run to blow the game open with a 72-48 lead.

"Our offense is really, really hard to guard," Clarke said. "And they struggled to score on us."

Clarke's five blocks gave him 74 for the year, breaking Austin Daye's season record of 70 at Gonzaga. Clarke said he was proud to be part of Gonzaga's long legacy of big men. "Blocking shots is a big part of my game," he said.

Gonzaga sank 22 of 27 free throws, while San Francisco made only five of 12.

Gonzaga won the rebound battle 46-34. "In the second half we did a good job keeping them off the glass," Few said

San Francisco: The surprising Dons came in tied for third in the league. ... San Francisco gave Gonzaga its toughest conference match this season when the Dons lost 96-83 at home. ... The Dons are off to their best start since the 1981-82 season, but have lost three straight. "We played three good halves against three really good teams, but couldn't put together any complete games," Smith said.

Gonzaga: The Bulldogs lead the nation with an average of 91.2 points per game, and are also first in field goal shooting at 52.7 percent. ... Gonzaga is coasting toward a seventh consecutive WCC regular season title, outscoring conference foes by more than 29 points per game. ... Gonzaga has won 23 straight games against conference opponents, tops in the nation.