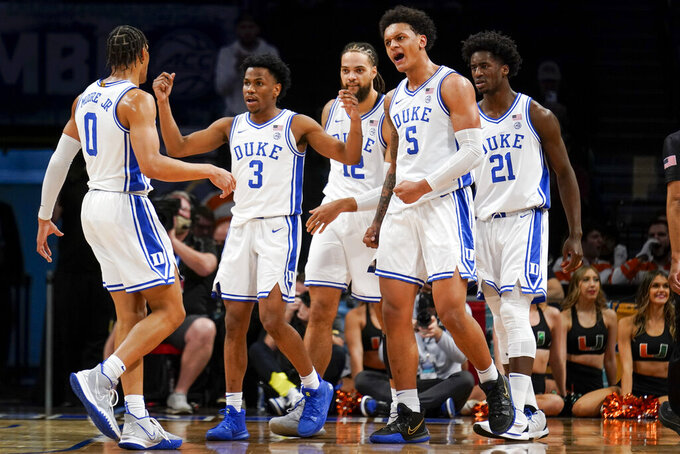 Duke's Paolo Banchero (5) celebrates scoring and drawing a foul in the first half of an NCAA college basketball game against the Miami during semifinals of the Atlantic Coast Conference men's tournament, Friday, March 11, 2022, in New York. (AP Photo/John Minchillo) 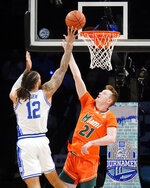 Paolo Banchero had 18 points and 11 rebounds and No. 7 Duke held off Miami with free throws in the final minute as the Blue Devils and their retiring Hall of Fame coach advanced to the ACC championship with an 80-76 victory Friday night.

Top-seeded Duke (28-5) will face seventh-seeded Virginia Tech in Saturday night's championship at Barclays Center after the Hokies beat No. 25 North Carolina in the late semifinal.

Banchero was asked during a postgame interview with ESPN who he wanted to face in the final and responded, simply: “UNC.”

Krzyzewski put an end to that in his postgame news conference.

“We’ll be honored to play either team,” he said before his players could answer the question again.

Less than a week ago, the Tar Heels upset Duke in Krzyzewski's home finale to spoil the retirement party. The Blue Devils won't get a rubber match with their rivals, but they will get a chance to give Krzyzewski a 16th ACC title. No coach has more.

AJ Griffin, who went to high school just north of New York City in White Plains, made three free throws in the final 15 seconds to finish a 21-point performance and seal Coach K's 22nd appearance in the ACC title game.

Krzyzewski is growing weary of all the send-off talk and wants to move the focus from the farewell tour to his players.

“I’m trying to get away from all that, it's really too much,” he said. “It's their season. It's all about them. I don’t want to be a distraction to them. They only get it once. I’ve had it numerous times.”

Kameron McGusty scored 24 points to lead the Hurricanes (23-10), who beat the Blue Devils on the road earlier this season and appear to be in solid shape for an NCAA Tournament bid.

The size and strength of the Blue Devils in the paint was hard to handle for the Hurricanes. Banchero, coming off a poor shooting game in a win against Syracuse that also went down to the wire, was 8 for 10 from the field with almost all the damage coming inside.

“I was just out there playing, but doing it aggressively,” the star freshman said.

Krzyzewski has been complaining about Duke's defensive play recently and this was another soft performance on that end — until the last five minutes.

McGusty and Jordan Miller (17 points, 11 rebounds) got plenty of good looks on mid-range jumpers and near the rim. The two combined to shoot 19 for 35 as the Hurricanes shot 47 percent from the floor.

Sam Waardenburg made a corner 3 for Miami with 5 minutes left that tied the score at 65 with 5:00 left. The 'Canes then went more than four minutes without another field goal.

Wendell Moore Jr. made two free throws for Duke with 58.6 seconds left to put the Blue Devils up 72-69.

Duke nudged the lead to 77-71 with more free throws before another corner 3 by Waardenburg cut it to 3 with 16.7 seconds left, but the Hurricanes never got another chance to tie or take the lead.

The Hurricanes led by as many as 11 in the first half, but Griffin scored 12 straight points late and Jeremy Roach closed the half with a full-court dash and layup to tie it at 36.

“He can really play,” McGusty said of Griffin. “He’s a great shooter. He has a nice body, frame. Strong, gets to the basket. He’s an all-around player. He had a heck of a game.”

Miami: The Hurricanes played a solid offensive game, but shot 6 for 12 from the line.

“We normally are a 70-75% free-throw shooting team and we missed some early. That obviously made a difference,” Miami coach Jim Larranaga said. “But our guys played as hard as they possibly can."

Duke: Larranaga said the difference between Duke now and when Miami beat the Blue Devils is the improved play of Roach and the return to full health of Griffin, who was slowed by a knee injury early in the season.

Miami: The Hurricanes await their first NCAA Tournament bid since 2018.

Duke: The Blue Devils opened the ACC season in December by beating Virginia Tech at home.