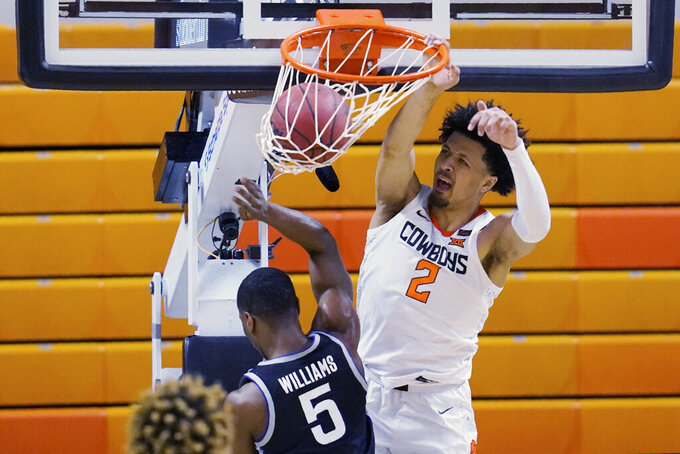 Cunningham, the freshman guard who leads the Big 12 Conference in scoring, had 15 points to help the 23rd-ranked Cowboys defeat the Wildcats 67-60 on Saturday.

Temperatures that hovered around 10 degrees Fahrenheit (minus-12 Celsius) made for a sparse crowd, but Cunningham rewarded those who showed up. From halfcourt, he hit a streaking Williams with a perfect bounce pass between two Kansas State defenders. Williams finished with a layup to give the Cowboys a 19-12 lead.

“I know it's probably already on Twitter somewhere," Walker said.

Those plays sparked the Cowboys and helped them take a 35-19 lead at the break. Oklahoma State held Kansas State to 25% shooting in the first half.

“I thought our defensive focus to start the game was excellent, and it carried us on to victory today,” Cowboys coach Mike Boynton said.

Kansas State made a push early in the second half. A 3-pointer by Pack cut Oklahoma State's lead to 41-35, and a dunk by Kaosi Ezeagu made it a four-point game.

Cunningham answered with a 3-pointer to spark a 7-2 run that put the Cowboys back in control.

Boynton said he was glad to see his team fight through the run to achieve its goal.

“It’s kind of the dog days,” Boynton said. “Postseason is still a little ways away, but there’s still enough games that you’ve got to have the right to focus on to win.”

Kansas State coach Bruce Weber said the Wildcats didn’t have much left after an 80-77 loss to No. 13 Texas on Tuesday.

“We came back Thursday and Friday and just did not have good practices,” Weber said. “It was the first time maybe in — I don’t even know when, to be honest — maybe way back early — that we didn’t have energy that we needed and emotion that we needed to prepare.”

Weber said his players continue to hang tough, despite not getting favorable results.

“It wasn’t that they didn’t try," Weber said. “They just had no energy. They had no emotion. Maybe just those games, those hard-fought games — it finally took a toll on our guys."

Kansas State: The Wildcats had the close call against Texas and outscored Oklahoma State 41-32 in the second half on Saturday. They are showing signs of improvement.

Oklahoma State: The Cowboys were dominant defensively in the first half, but they allowed the Wildcats to shoot 55% after the break. Oklahoma State will need to close better to make noise in March.

The 6-foot-9 sophomore had nine rebounds, the third time in his past five games that he’s had at least that many. His rebounding average over that five-game stretch is 8.6.

Walker stepped into the starting lineup and had 10 points and six rebounds.

“I just felt like it was another day,” Walker said. “Really was no different. My job was today was to come in and give a spark immediately instead of off the bench.”