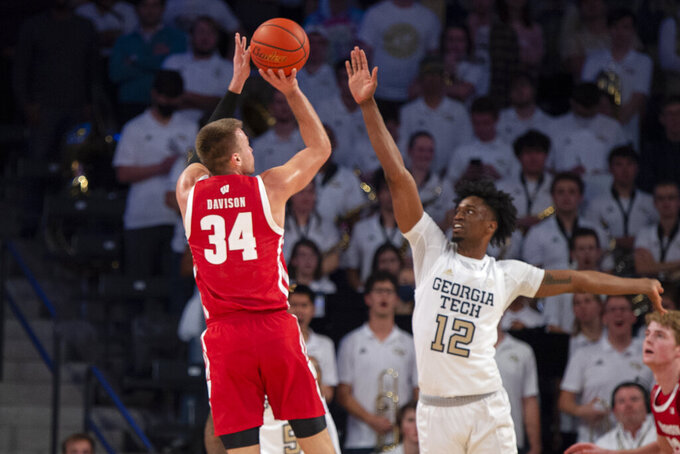 ATLANTA (AP) — Brad Davison scored nine straight points midway through the second half and finished with 27, leading No. 23 Wisconsin to a 70-66 win over Georgia Tech on Wednesday night.

The Badgers (6-1) carried a one-point lead into halftime and built a 10-point advantage in the second half behind the play of Davison, a fifth-year senior who is Wisconsin’s second-leading scorer averaging 13.3 points entering the game.

Wisconsin coach Greg Gard called for his defense to extend itself outward toward Devoe in the second half, and that led the ball to senior guard Jordan Usher for a 3-point shot when Tech trailed 66-64 with 24 seconds remaining in the game.

Usher, a transfer from USC, missed the shot badly.

The Yellow Jackets forged a tie at 61-all on a three-point play by Devoe with 5:27 remaining. Devoe scored 17 of his points in the first half. The senior guard surpassed his season average of 23.4 points in the middle of the second half, but didn't get much help.

Wisconsin leading scorer Johnny Davis added 15 points and six rebounds, and the Badgers got six rebounds from seven-foot, fifth-year center Chris Vogt, all in the first half.

“Vogt saved us when we couldn't get a rebound to save our life,” Gard said.

The Badgers took a 32-31 lead just two seconds before halftime when Davis made a 3-pointer. The half had been tightly contested up to that point. Davidson and Davis combined for seven 3-pointers in the first half, while their teammates shot 2 of 15 from the field.

Wisconsin won its fourth consecutive game on a sub-standard defensive night for the Badgers. They were allowing just 56.7 points per game.

Devoe scored half of Tech's points in the game, and when the contest came down to its most critical moment, Gard gave credit to freshman guard Chucky Hepburn for making a run at Devoe to prevent him from getting a clean shot.

Instead, the ball went to Usher.

“He got a great look,” said Georgia Tech head coach Josh Pastner. “For us to be successful moving forward, he's going to have to be good for us.”

Wisconsin: The Badgers were steady, if not outstanding, on offense and blocked five Georgia Tech shots to aid the defense.

Georgia Tech: “Blooper,” the mascot for the World Series champion Atlanta Braves, performed at the game. The mascot generally moved about McCamish Pavilion in tandem with the Yellow Jackets’ traditional mascot, “Buzz.”

In the middle of final exam week at Georgia Tech, the student section behind the west baseline was over-stuffed and over zealous. “The students resonate with our program,” Pastner said. “We normally get about 900 (student tickets allotted), and it was like 2,100 tonight. The students were awesome."

Wisconsin: Hosts Marquette on Saturday before kicking off Big Ten play against Indiana on Wednesday.