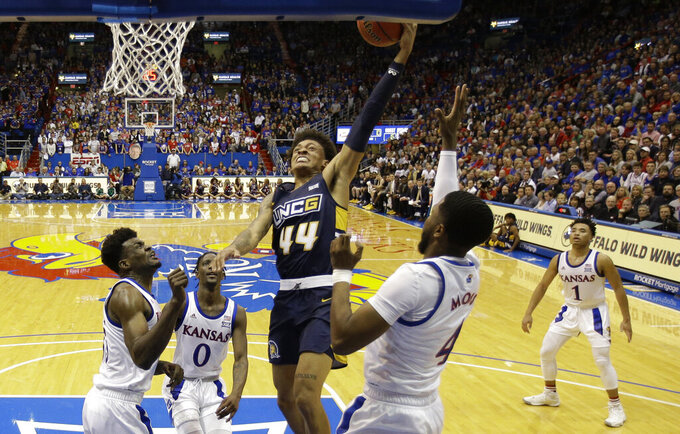 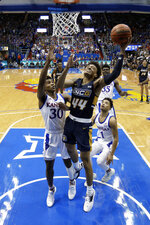 LAWRENCE, Kan. (AP) — Devon Dotson and No. 3 Kansas got back on track.

Dotson had 22 points and six assists and Udoka Azubuike added 10 points and 10 rebounds in Kansas' 74-62 victory over UNC Greensboro.

"I thought Devon played great," Kansas coach Bill Self said. "That was a different Devon than we saw on Tuesday night."

The Jayhawks rebounded from a loss to No. 4 Duke on Monday night.

"We had a tough time dealing with him (Dotson) tonight, staying in front," UNC Greensboro coach Wes Miller said.

After leading by four points at the half, the Jayhawks (1-1) shot 41.7% from beyond the arc in the second half to pull away. Kansas shot 45.8% from the field overall and outrebounded the Spartans 42 to 35.

"I think our team got kind of relaxed and fatigued, and they took advantage of us," Isaiah Miller said.

A late 9-0 run brought the Spartans within 10 points.

Kansas: Having fallen 68-66 to Duke in a matchup plagued by 28 Kansas turnovers, the Jayhawks turned the ball over 10 times amidst the full-court pressure from Greensboro.

UNCG: After routing North Carolina A&T 83-50 on Tuesday and hanging tight early with Kansas, the Spartans take considerable momentum home to Greensboro Coliseum in preparation for the Spartan invitational next week.

While the Spartans kept it close early, a critical three-ball by Isaiah Moss extended the Kansas lead to 42-34 at the 17:30 mark, forcing a UNCG timeout and shifting momentum in favor of the Jayhawks. Moss finished with eight points after receiving the second-half starting nod.

"That was his first official game, so he had to get his feet under him," Dotson said of Moss. "He's getting the flow, and once he gets that, comfortable, he was fine. He's only going to get better from here."

"I think it's just a switch you have to turn on, and once you've done that it's just all automatic," Enaruna said.

After missing the Jayhawks' season-opener due to an ankle injury, Jalen Wilson saw only a few seconds of action Friday before limping to the sideline and asking Self to call a timeout, not facing any contact.

"He broke it and requires surgery early next week," Self said. "Time table on return will probably be close to three months. I'm not going to tell you he will sit the rest of the year, but the likelihood of that is pretty strong."

UNC Greensboro: Hosts Averett on Monday in the opening game of the Spartan Invitational.