Duke wins opener in quest for 5 straight in ACC tourney 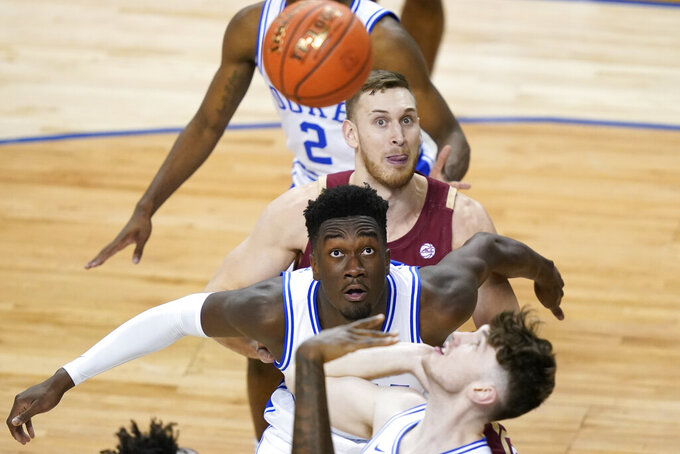 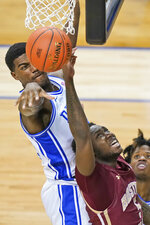 No team has won five ACC tournament games in five days — but Duke (12-11) likely must do so to avoid missing the NCAA Tournament for the first time since 1995.

Steward, Williams and Jeremy Roach — all freshmen — combined for 27 of Duke's 41 first-half points. Steward scored 13 points with three of Duke's eight 3-pointers and Williams was 5 of 6 from the field for 11 points.

Jordan Goldwire closed the first half with a 3-pointer, and he made 3-pointers on back-to-back possessions, capping an 11-2 run, to give Duke a 22-point lead with 12:31 remaining.

The Blue Devils, starting the tournament with their lowest seed ever, made six of their first 10 3-pointers and finished with a season-high 15, while 15th-seed Boston College was just 1 of 15. Duke had 17 2-point baskets en route to posting its second largest margin of victory in an ACC tourney game.

Goldwire, a senior, scored 12 points on a career-high four 3-pointers for Duke, which snapped a three-game skid. The Blue Devils advance to play No. 7 Louisville on Wednesday, looking to stop a three-game losing streak in the series. The Cardinals won 70-65 on Jan. 23, and 80-73 in overtime on Feb. 27 to spoil Matthew Hurt's 37-point performance.

Boston College (4-16), under interim head coach Scott Spinelli, did not have a player score in double figures after shooting just 39.1%. Makai Ashton-Langford had nine points and DeMarr Langford and James Karnik each added eight.

Duke has won 16 of the last 17 meetings between the schools, including an 83-82 win at Cameron Indoor Stadium earlier this season. BC’s CJ Felder scored a career-high 24 points in that contest, but was held to just four points on 2-of-8 shooting in the tournament.