Hurricanes try to bounce back from Larranaga's worst start 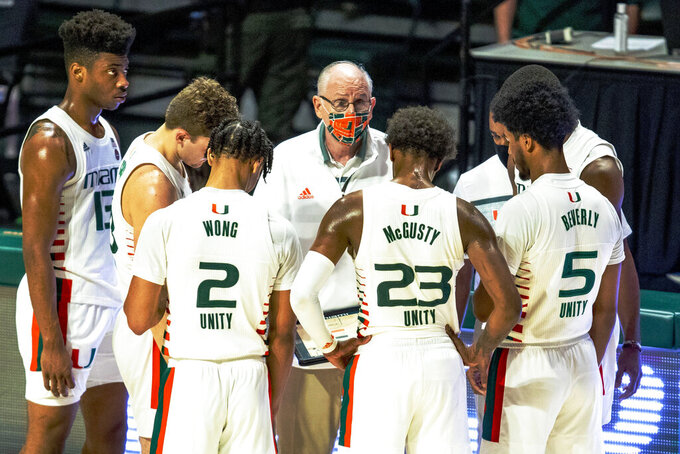 Miami head coach Jim Larranaga speaks to his players during a timeout in the first half of an NCAA college basketball game in Coral Gables, Fla., on Saturday, Jan. 2, 2021. (Daniel A. Varela/Miami Herald via AP) 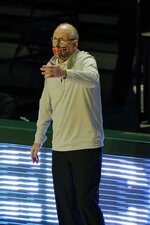 MIAMI (AP) — To move ahead of John Wooden on the list of coaching victories, the Miami Hurricanes' Jim Larranaga needs just one win, which has been the case for three weeks.

The Hurricanes are 4-5, their worst start in Larranaga's 10 seasons at Miami — and in fact their worst since 1992-93. They've lost their first four Atlantic Coast Conference games, their worst league start since 2000-01.

Injuries have been part of the problem, as has bad luck. The past three losses were by a combined five points, and Miami is only the second ACC team ever to endure such a stretch of narrow defeats, according to the Elias Sports Bureau.

Two of the losses came against Virginia Tech and Clemson, both now ranked 19th.

“These last three ACC games are very tough to swallow," Larranaga said. “We've had multiple chances to win these games, and just keep coming up a little bit short.”

One of four teams without a win in ACC play, Miami will try to reverse course Saturday at North Carolina State (6-2, 2-1 league).

That has been a challenge, especially in the wake of the latest loss. Miami blew a 10-point lead in the second half at home against North Carolina, and a defensive lapse allowed the Tar Heels to score the winning basket with three seconds left.

"We’ve lost our last three games basically at the buzzer," senior guard Elijah Olaniyi said. “Losing these close games is going to get us over the hump -- knowing what we have to do when that clock is winding down and there are two minutes left, and the seriousness we have to play with.”

Miami's program has been trending downward of late, with losing records each of the past two seasons. Even so, the conference cellar is unfamiliar terrain for Larranaga, who is tied with Wooden for 36th in coaching victories.

With four returning senior starters and highly touted recruit Earl Timberlake, the Hurricanes were projected for the middle of the league pack this season. But while they have avoided setbacks from the coronavirus pandemic, injuries have riddled the roster.

“This is a really nice group of guys,” the coach said. “They like each other; they get along very well. We just have had so much adversity with injuries. The most challenging part is being able to prepare for an opponent.”

Waardenburg and Miller are out for the season. The dynamic Lykes, a preseason first team all-ACC selection, has been sidelined since early December because of a sprained ankle and doesn't appear close to returning.

“If he comes back soon, he's not in shape,” Larranaga said. “He hasn’t played in a month. How do you go out and play when you haven't run up and down a court for over four weeks?”

There's cause for optimism as newcomers Timberlake, Olaniyi and freshman Matt Cross have all played well.

The 6-foot-6 Timberlake made his first start in Tuesday's loss to North Carolina and had 12 points, five rebounds, five assists, five steals and two blocks.

“Earl is a guy who can be a major contributor at both ends of the court,” Larranaga said. “He is very good at attacking the defense, he’s very good at defending multiple positions, and he can rebound.”

For the Hurricanes, that's the question: How well can they rebound?

Aside from Miami, the only ACC team to endure three consecutive losses by a combined five points or less was Georgia Tech in 1989-90. That team went on to the Final Four.