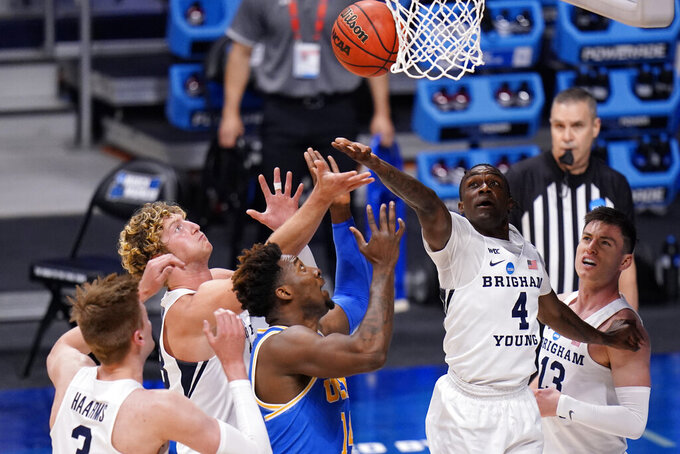 BYU guard Brandon Averette (4) reaches for a rebound with UCLA forward Kenneth Nwuba (14) and BYU forward Caleb Lohner, second from left, and BYU forward Matt Haarms (3) during the second half of a first-round game in the NCAA college basketball tournament at Hinkle Fieldhouse in Indianapolis, Saturday, March 20, 2021. (AP Photo/AJ Mast) 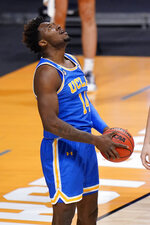 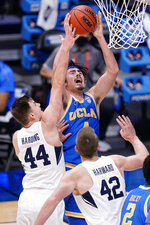 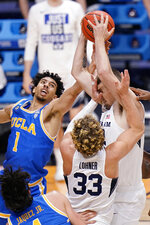 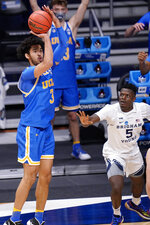 INDIANAPOLIS (AP) — UCLA is suddenly one of the hottest teams in the NCAA Tournament after backing into it with four straight losses.

Johnny Juzang is suddenly one of its hottest players, too.

After helping the No. 11 seed Bruins rally past Michigan State in the First Four, Juzang poured in 27 points against sixth-seeded BYU on Saturday night, carrying his team to a 73-62 victory and the second round of the East Region.

“This is what we live for. This is the height of college basketball,” Juzang said, “and playing for the Bruins — I'm from Los Angeles. Playing with a lot of guys I've known, we're all brothers here. So putting on this jersey with my brothers, coming out, playing for the home team — I'm just trying to make everybody on the team proud.”

Juzang didn't do it alone.

Jules Bernard scored 16 points, most of them as BYU tried to rally in the second half, and Jaime Jaquez Jr. added 13 as the Bruins advanced to play No. 14 seed Abilene Christian — which upset third-seeded Texas about 30 minutes after UCLA had wrapped up its own win — on Monday night for a spot in the Sweet 16.

Still, the Bruins should be favored in a game for the first time in quite a while.

“Look," Cronin said, “we had some tough times late in the year, but playing good teams, it can either kill you or it makes you better. You're finding out that the Pac-12 not being ranked all year was an absolute joke.”

Alex Barcello led the Cougars (20-7) with 20 points. Brandon Averette added 15 points and Matt Haarms finished with 11 points and 10 boards as BYU — which fell to Gonzaga for the third time this season in the Mountain West finals — suffered back-to-back defeats for the first time in 60 games.

“The game teaches you all the time how you need to get better. There's a number of things we can take from this game to get better,” BYU coach Mark Pope said. “But I'm not there right now. It's a hard locker room right now.”

UCLA's late-season swoon forced it into an unenviable First Four game against Michigan State, and it looked as if a season that began with promise would end there with a whimper. Instead, the Bruins leaned on Juzang to rally them to a win in overtime, and they carried that confidence and momentum into Saturday night.

Juzang, who had tweaked his ankle late against the Spartans, followed up his 23-point performance in West Lafayette by going 8 of 11 from the floor and scoring 19 first-half points. Bernard and Jaquez also built on their big games from Thursday night, at one point the trio helping UCLA hit field goals on seven consecutive trips down the floor.

That sent UCLA into halftime with a 38-27 lead over the shell-shocked Cougars.

Barcello tried to shake them out of their malaise.

One of the nation’s top 3-point shooters hit one early in the second half. Then, Barcello found space inside the Bruins’ man-to-man defense for a couple easy jumpers. It was all part of a 10-0 run that made it 43-39 with 14 minutes to go.

“They kept fighting. They kept trying to chip away,” Pope said. “That's this locker room. It's what they've been all year.”

It wasn't enough, though. Not when Juzang started getting some help from his team.

Bernard answered BYU's charge with a jumper and a 3-pointer minutes apart, Jaquez scored on a nifty put-back and David Singleton scored his only two buckets of the game. The Bruins quickly pushed the lead back out to 56-45 with less than 10 minutes to go, then spent the rest of the game answering every salvo from the Cougars with one of their own.

“They caused us all kinds of problems. They played terrific,” Pope said. “UCLA can be so meticulous and demonstrative with their pace of play, so it makes it hard to claw back in. And you know, it's a game. It's March. It happens.”

UCLA committed only four turnovers, two in each half, allowing Cronin’s team to play the plodding style it prefers. That kept the Cougars from getting into transition, and they were unable to score effectively out of half-court sets.

BYU regularly goes 10 deep and had outscored opponents in 23 of 26 games off the bench. But it got little help Saturday night, when the Cougars' depth should have come in handy against a team that had gone to OT two days earlier.

The Bruins will play the upstart Wildcats on Monday night in their third game in five days.