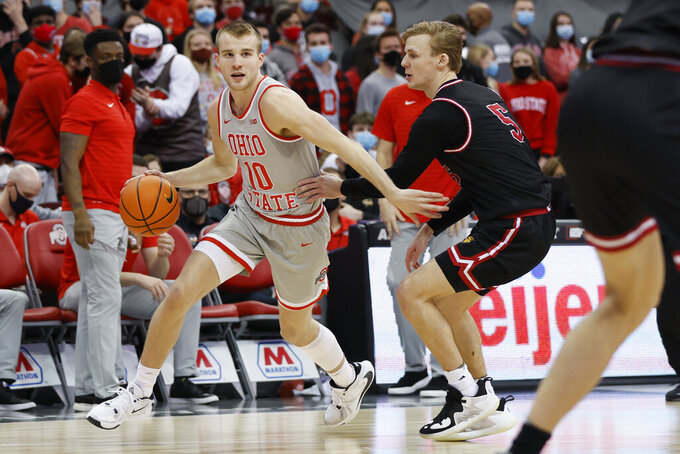 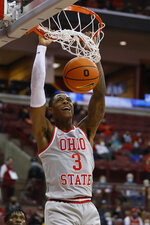 Liddell extended his streak of double-figure scoring to 27 games and recorded his third double-double this season.

“We had 47% written on our board because that was their field-goal percentage going into the half,” Ohio State’s Jimmy Sotos said. “We knew we had to pick it up.”

IUPUI's shooting dipped to 19% in the second half, while Ohio State shot 66.7% after halftime and 57% for the game.

Eugene Brown III scored a career-high 14 points for the Buckeyes. He shot 4 of 6 and made five free throws.

“We were in tune with their plays. There’s just a talent gap,” IUPUI coach Matt Crenshaw said.

BROWN BIG OFF THE BENCH

Brown played 17 minutes off the bench after contributing 18 minutes against Penn State on Sunday, which was his most since Nov. 15. Brown’s four field goals on Tuesday were as many as he had made in his last seven games combined.

“I thought his play was good and something he can continue to build upon,” Ohio State coach Chris Holtmann said. “I thought he’s got to embrace the idea of being a guy that can guard multiple positions and be really good and detailed on that end.”

Liddell is on the verge of becoming the 60th Ohio State player to score 1,000 points in his career. He needs 12 points to reach the mark.

“He’s such a special kid,” Holtmann said. “I think there’s going to be a few tears shed in the Holtmann house, a lot of homes, when he moves on, because he’s beloved.”

Both IUPUI and Ohio State had three consecutive games canceled in the last several weeks. The programs added this game on Jan. 10.

“I want to thank all the people, all the parking attendants, everybody who didn’t necessarily have this on their schedule but was able to chip in and make this game happen kind of on the fly,” Holtmann said. “It was unique with adding a game in-league, but ultimately glad we did.”

IUPUI: The Jaguars committed 21 turnovers, tying the third most they’ve allowed this season. Ohio State capitalized for 31 points off those giveaways.

“They were so physical,” Crenshaw said. “A team like that, it just takes its toll on you if you don’t have the bodies and the physicality to match them. Not many teams do, and we don’t.”

Ohio State: The Buckeyes improved at the 3-point line after shooting worse than 25% in their last two games. They shot 48% from beyond the arc, their second best mark of the season.