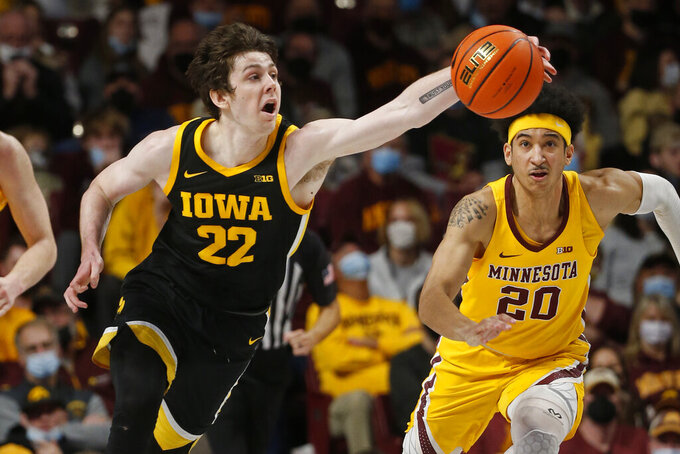 Iowa forward Patrick McCaffery (22) reaches for the ball as Minnesota guard Eylijah Stephens (20) pursues him in the second half of an NCAA college basketball game Sunday, Jan. 16, 2022, in Minneapolis. (AP Photo/Bruce Kluckhohn) 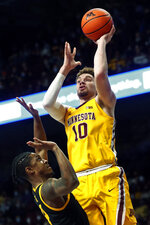 Murray sank 11 of 17 shots from the floor in notching his fourth double-double of the season for the Hawkeyes (13-4, 3-3 Big Ten Conference). Jordan Bohannon, Patrick McCaffery and Filip Rebraca all scored 12 points for Iowa, with Rebraca added 12 rebounds for his first double-double.

Payton Sandfort scored in the paint to push Iowa's lead to 66-46 with 10:24 remaining and after the teams traded baskets Treyton Thompson scored eight points in a 22-6 run to get Minnesota (10-5, 1-5) within 72-68 with 2:47 left to play. Jamison Battle's 3-pointer pulled the Golden Gophers within 74-71, but Murray answered with a 3 for Iowa with 59 seconds to go and Bohannon made four free throws in the last 30 seconds.

Minnesota was playing without two assistant coaches and four players — Eric Curry, Sean Sutherlin, Danny Ogele and Joey Kern — due to illness, COVID-19 health and safety protocols or injury. Eight players suited up — seven on scholarship. Last month the Big Ten announced teams must have at least seven scholarship athletes and one coach available to compete in conference games.

E.J. Stephens scored 24 points and played all 40 minutes for the Golden Gophers. Battle sank four 3-pointers and scored 20. The duo combined for 29 of Minnesota's 44 second-half points.

The Hawkeyes, who came in second in the country with a 1.92 assist-to-turnover ratio and who average just 8.9 turnovers per game — third best in country — finished with 18 assists and eight turnovers.

Iowa will travel to play Rutgers on Wednesday, while Minnesota will try to end a four-game skid when it hits the road to play Penn State.