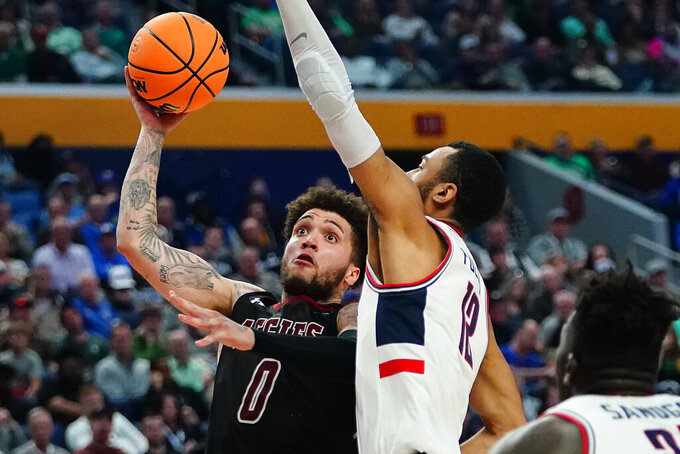 New Mexico State guard Teddy Allen (0) shoots against Connecticut forward Tyler Polley (12) during the second half of a college basketball game in the first round of the NCAA men's tournament Thursday, March 17, 2022, in Buffalo, N.Y. (AP Photo/Frank Franklin II)

“Old” is a relative term in college basketball, but if the players in this year's NCAA Tournament looked somehow older than usual, relax. It's not your eyesight. It's the new normal.

It began with the COVID-19 pandemic that cut a wide swath through the past three seasons and convinced the NCAA to grant more than a few players an extra year of eligibility. Throw in the usual number who took “redshirt” years to deal with injuries, then add in those who took advantage of the NCAA's increasingly relaxed transfer rules, which let players who don't like the fit on their old team try on a new one — or several for that matter — and voila!

All of a sudden, you've got more juniors and seniors playing key roles across the map than we've seen in some time. It's no longer limited to the mid-major programs that have been relying on upperclassmen for years.

Perhaps no one played a bigger role, or better exemplified the state of flux the game is in, than Teddy “Buckets” Allen. The redshirt junior scored 37 points, including the final 15 for New Mexico State — the fifth college program Allen has suited up for — to lead the 12th-seeded Aggies to a 70-63 upset of No. 5 seed Connecticut on a topsy-turvy opening day.

In the biggest upset of the night, 15th-seeded St. Peter's, a Jesuit university from Jersey City, New Jersey, with an enrollment of 2,100, knocked off second-seeded Kentucky, 85-79, in overtime. Also punching above its weight was Richmond, which rode 24 points from Jacob Gilyard as the other 12-seed to topple a No. 5, taking down Big Ten tournament champ Iowa 67-63; and 11th-seeded Michigan, leaning on big man Hunter Dickinson, to salvage some conference pride by toppling sixth-seeded Colorado State 75-63.

On the other end of the spectrum, the chalk had a good day. Defending national champion Baylor, the top seed in the East, crushed Norfolk State 95-63, and Gonzaga, the team the Bears beat in last season's finale and the top overall seed again this season, found its footing in the second half and shook off Georgia State 93-72. Kansas, the third top seed in action Thursday, put an 83-56 beating on Texas Southern.

Before the tournament began, New Mexico State coach Chris Jans joked about repeatedly failing to recruit Allen at any of those previous stops.

“This is my third time recruiting him,” Jans said. “Took me a while, but we finally got it done.”

It looked like a less-than-rewarding partnership early, when Allen missed his first six shots from the floor. But the Western Athletic Conference player of the year has yet to meet a shot he doesn't like, and even his misses are often productive. Sprinkled in among those 37 points was a cold-blooded 13 for 13 performance at the free-throw line.

Asked afterward whether that slow start made him hesitant to call for the ball, Allen looked incredulous.

If those upsets didn't bust your bracket, the upset-that-wasn't probably did. South Dakota State, the hottest team entering the tournament and a longshot favorite, got cold at the absolute worst time and got dropped 66-57 by fourth-seeded Providence.

The 13th-seeded Jackrabbits had the nation's longest winning streak (21 games) and the second-highest scoring average (86.7) going in. Providence couldn't have been much colder, struggling to beat lesser opponents on three separate occasions in the last month and getting blown out by Creighton in the Big East tournament. On the other hand, the Friars have won 16 games by single digits, they caught South Dakota State on one of their worst shooting nights all year — 38.6 percent from the field and 30.4 behind the arc — and still needed all three free throws from Jared Bynum with 29.9 seconds left to make their escape.

“If luck is the narrative that continues to keep us connected and winning," Providence coach Ed Cooley said, "we’ll take it.”

Luck, to be sure, is always a precious commodity in the tournament. According to NCAA.com, the odds of a perfect bracket using only coin flips for each matchup are 1 in 9,223,372,036,854,775,808. The organization's website does note, however, that you can cut those down to 1 in 120 billion or so with some research.

Those daunting odds were further reduced by the wealth of experience on Richmond's roster. The Spiders have nine seniors on their 20-man roster, including sixth-year senior Grant Golden and five fifth-year graduate students, among them Gilyard, who sealed the win by making all four of his free-throw attempts in the final 16 seconds.

In a bit of serendipity, the loss ended the college career of Iowa's Jordon Bohannon, himself a sixth-year senior playing in his NCAA-record 179th and final game.

“I faced a lot of adversity coming back, you know, a couple of hip surgeries, dealt with a lot of injuries," he said, struggling to hold back tears. "And I can honestly say this last year, I put my heart and soul into this team, and hopefully I left this jersey in a better place than where I found it.”