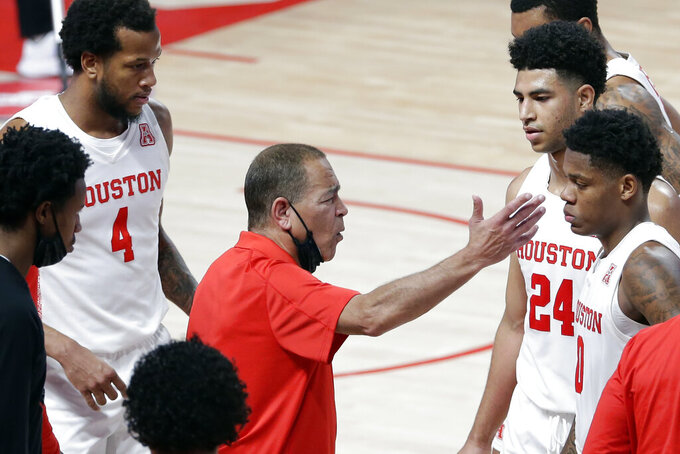 Houston head coach Kelvin Sampson, center, talks with his players during a time out against Central Florida during the first half of an NCAA college basketball game Sunday, Jan. 17, 2021, in Houston. (AP Photo/Michael Wyke)

HOUSTON (AP) — Quentin Grimes scored 18 points, Justin Gorham added 15 points and nine rebounds and No. 11 Houston used a dominant first half to cruise to a 75-58 win over UCF on Sunday.

Grimes scored in double figures for his 11th straight game after opening the season with eight points against Lamar. Houston (11-1, 6-1 American Athletic Conference) won its fourth straight game since its loss to Tulsa.

“It was a great game for us,” Houston guard DeJon Jarreau said. “Everybody came out firing. I feel like we can get way better.”

The Cougars shot 42%, including 8 of 25 on 3-pointers. Houston has made at least seven 3-pointers in four straight games.

“When we had guys with great strokes … they had a lot of good nights, but they had nights where it didn’t go in, too,” Houston coach Kelvin Sampson said. “That’s just nature of 3-point shooting. As long as good shooters are putting up good shots, they will go in.”

Houston forced UCF into 20 turnovers, which the Cougars turned into 22 points.

“They made a lot of shots to start the first half off and kind of knocked us back,” UCF coach Johnny Dawkins said. “I was disappointed. We had a game plan, a strategy, and I don’t think we executed well at all to start. We gave them some of the looks we were trying to take away. We have to be better than that.”

UCF lost to Houston for the second time this season after falling in Orlando, 73-54, on Dec. 26.

“We played some great teams this year, and none have been even better than Houston, to be quite frank,” Dawkins said. “The way they play the game, they are so connected. They play together. They play with such a physicality and aggressiveness for 40 minutes. I respect that as a coach. I respect the way they play. They are the cream of our league.”

Houston jumped out to a 38-9 lead capped by a three-point play from Brison Gresham with 3:43 left in the half.

The Cougars started the game with four straight 3-pointers — two by Jarreau and one apiece from Grimes and Marcus Sasser — and hit eight of their first 10 field goals. Grimes and Sasser each had eight points in the game-opening run.

“It’s hard to play better,” Sampson said. “You’re not going to play better than that. … I thought our kids came out ready to play. We were excited to play.”

UCF: The Knights were without guard Darius Perry for a second straight game. UCF lost its third consecutive game against Houston and seventh in the last eight meetings. Brandon Mahan had 10 points and eight rebounds.

Houston: The Cougars played their first game in eight days. Their game at South Florida on Jan. 14 was postponed due to positive COVID-19 tests and contact tracing within the USF program. Houston won its 18th straight game at home.