No. 12 Houston blows out USF with huge first-half run 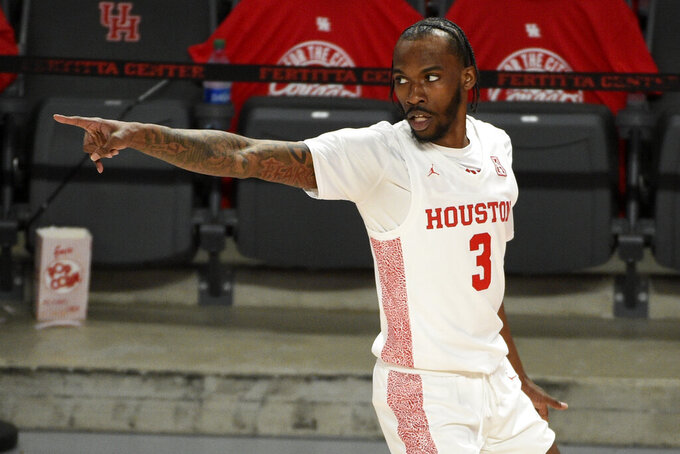 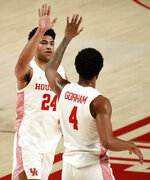 Grimes scored 16 straight points at one point as the Cougars (20-3, 13-3 American Athletic Conference) put the game away with a huge first-half run. The junior guard, who scored 21 of his 33 points in the first half against Western Kentucky on Thursday, finished 8 of 16 from the field and hit 6 of 12 3-pointers.

“When he gets hot like that, it’s really amazing to watch,” Houston guard DeJon Jarreau said. “I just want him to keep shooting because it’s really a show. I enjoy watching it, and the whole team enjoys watching it. Whoever is hot, we try to keep feeding him.”

Jarreau added 16 points, eight rebounds and six assists, and Justin Gorham and Fabian White Jr. had 10 points apiece for Houston, which won its third straight and reached 20 wins for the sixth consecutive season. The Cougars shot 60% and made 15 of 33 3-pointers.

“We’re 20-3, which tells you a little bit about the program,” Houston coach Kelvin Sampson said. “Just the consistency of the program is hard to do. Most people take that for granted because you just assume you’re going to do it because it must be easy. It’s not.”

“Playing defense, we defended well,” Jarreau said. “We made a lot of shots today. Coach Sampson always says that if we make shots and defend well, it will be hard for a team to beat us. With those two things coming together, it doesn’t get any better than that.”

Xavier Castaneda scored 11 points and Caleb Murphy added 10 for USF, which has lost five of six. The Bulls shot 37%.

“You got to make every shot you take against them when you’re open,” USF coach Brian Gregory said. “In that first half, we had some good looks at some 3s, just weren’t able to finish. They took advantage of it.”

“Over the last probably two weeks, Houston has started to find their groove on the offensive end,” Gregory said. “Grimes is playing at an extremely high level right now. That has been the next phase for them is to be able to score the basketball, move the basketball and get easy baskets.”

South Florida: The Bulls entered ranked 15th in the NCAA in offensive rebounds, averaging 13.2 per game. They had 13 against Houston but managed only nine second-chance points. ... USF has lost 32 straight games against ranked opponents, with its last win in February 2012 over then-No. 19 Louisville.

Houston: The Cougars won their 24th straight at home. ... Houston won its ninth straight against the Bulls. ... The Cougars committed five turnovers while forcing 11 steals. Houston had 27 assists, held a 36-16 advantage in points in the paint and a 31-1 edge in fast-break points.