No. 12 Memphis poised to chase title with No. 1 class, vets 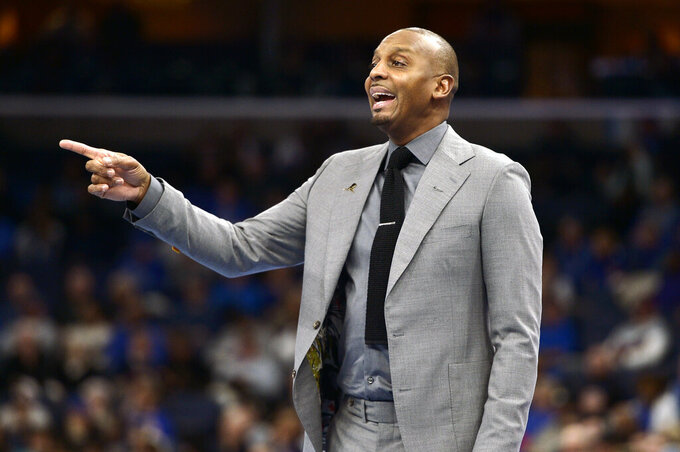 “What I’ve learned this time is to mix the veterans with the young guys," Hardaway said. "You have the No. 1 recruiting class, but you have some really good veterans to have that mix of older and younger, and that just makes the blend of that is so much better this time around.”

That combination is a major reason the Tigers start the season ranked No. 12 nationally.

It's their highest preseason ranking since being No. 11 in the opening poll of the 2011-12 season. The last time Memphis started a season ranked, they were 14th in 2019-20 with Hardaway's first top recruiting class.

That was when Hardaway had James Wiseman, now with the NBA's Golden State Warriors, and the Toronto Raptors' Precious Achiuwa in a class featuring seven freshmen. Hardaway says even if he had Wiseman for more than the three games he played, that 21-10 season would've been different and still challenging.

Hardaway has plenty of experience this time with junior guard Lester Quinones, a member of Hardaway's first No. 1 recruiting class, a trio of seniors led by forward DeAndre Williams and guard Alex Lomax and guard Landers Nolley II, in his second season after transferring from Virginia Tech.

“We have expectations that are higher than anybody else’s expectations in the country about us," Hardaway said. "We we know what’s at stake at all times.”

This No. 1 recruiting class of six freshmen is led by 6-foot-8 guard Emoni Bates, who reclassified from 2022. He originally committed to Michigan State before changing his mind. He joined his former AAU teammate Jalen Duren, another five-star recruit, in Memphis in late August.

Bates is the player projected as the No. 1 overall pick when he becomes eligible for the NBA draft after he turns 19 in 2023. He has impressed Hardaway with his work ethic and how hard he works in the gym.

“He has a lot to prove," Hardaway said. "I mean, the kid has been in the spotlight since he was 12 ... And there’s always been a spotlight on him, and I think he feels the pressure to be able to produce every single time and what that has done to him personally has driven him.”

Hardaway also added a trio of transfers. Sophomore forward Earl Timberlake spent his freshman season at Miami, guard Tyler Harris is back at Memphis after spending last season at Iowa State and Memphis native Chandler Lawson is home after playing the past two seasons at Oregon.

Memphis is trying to end an NCAA Tournament drought stretching to 2014, and this is a program that's played in three Final Fours, the last in 2008 with the banner in a box for NCAA punishment. More punishment could be coming over the Wiseman case.

For now, Hardaway has Hall of Fame coach Larry Brown with his three Final Four berths and four-time NBA All-Star Rasheed Wallace on his coaching staff to push the reigning NIT champs to the title the Tigers really want.

“The pressure’s on,” Hardaway said. "We know that and we’re looking forward to the challenges of what it takes to get to the NCAA tournament and then advancing once you get there.”

Hardaway wants to test his Tigers, and he has a tough nonconference schedule.

They host Saint Louis, Western Kentucky and Murray State. Memphis also plays in the NIT Season Tip-Off against Virginia Tech with a second game against either Xavier or Iowa State.

The Tigers will play four Southeastern Conference teams, visiting Georgia and Ole Miss while hosting Alabama. Memphis plays No. 18 Tennessee on Dec. 18 in Nashville. They play No. 15 Houston, the preseason pick to win the American Athletic Conference, twice in the final six games of league play.

“You have to play good teams to win it all,” Hardaway said.