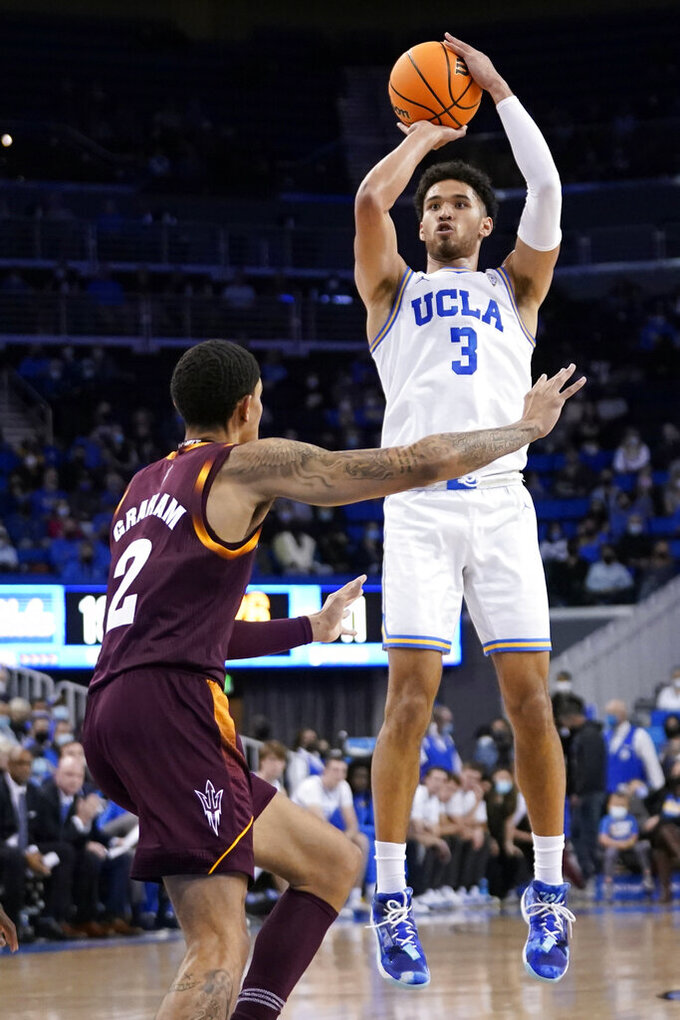 LOS ANGELES (AP) — With the memory of their triple-overtime loss at Arizona State still fresh two weeks later, the UCLA Bruins weren't about to let the rematch slip away on their home court.

Jaylen Clark had 16 points and nine rebounds in his third straight start and the 12th-ranked Bruins avoided a second-half collapse to beat the Sun Devils 66-52 on Monday night for their third consecutive win.

“Unless it stayed over 10, I knew it was coming,” UCLA coach Mick Cronin said.

David Singleton's 3-pointer beat the shot clock, sparking a 14-2 run that kept UCLA ahead for good. The Bruins made five of seven free throws during that span.

“We really started to ramp up the defense,” said Jules Bernard, who had 16 points and made all seven of his free throws. “We just really picked up our intensity.”

Jaime Jaquez Jr. added 13 points and 10 rebounds for the Bruins.

“I feel like for this team I’m the Energizer bunny,” Clark said. “I try to be as animated as possible after making crazy plays like that just to get everybody going. I love taking the ball and going down lighting up.”

Johnny Juzang returned to score 10 points after missing Saturday’s game against Washington with a hip injury when he fell off a scooter. He missed his last eight shots in the Bruins’ earlier triple-overtime loss to the Sun Devils and then missed his first two Monday before scoring.

The Bruins were without Tyger Campbell, who hurt his left shoulder on the first possession of Saturday’s game against Washington but played the rest of the way. He participated in shootaround, but his shoulder hurt too much to play. Also sitting was Peyton Watson, who sustained a left knee injury in that same game.

Horne rallied the Sun Devils within six to start the second half. With his team trailing by 13, he scored nine of its first 11 points to close to 38-32, capped by his back-to-back 3-pointers. Heath and Luther Muhammad picked up their third fouls during the same stretch.

ASU kept up the pace on offense and the Bruins went cold on their end. The Sun Devils ran off seven points in a row, with Jamiya Neal’s 3-pointer getting them to 43-39. UCLA missed six of its first eight shots in the half.

“They challenged everything,” Sun Devils coach Bobby Hurley said. "I think that was the finest defensive performance we have faced all year.”

Arizona State: The Sun Devils are trying to close out the regular season strong. Of their four remaining games, the only opponent with a winning record is Colorado. After visiting the Buffaloes and Utah, they return home to host Cal and Stanford. ASU beat Utah in the previous meeting and lost to the other three schools. “We won three in a row and we were right there in this game,” Hurley said. “We just have to execute better in the half court.”

UCLA: Just one of the Bruins' four remaining regular-season games will be played at Pauley Pavilion, where they are 13-1. Their other three are at Oregon, last-place Oregon State and Washington. Only the Ducks have a winning record, but they've lost two in a row.

Jaquez wears braces on both ankles and doesn't practice in order to be able to play in games. He's been bothered by ankle injuries at various times this season, but has started all 24 games in which he's appeared.

“Most guys wouldn’t be playing,” Cronin said. “He would not desert his team, though.”

Jaquez arrives early to get treatment and do rehab work. He came in averaging 12 points, 5.2 rebounds and 2.3 assists per game.

“Today I felt really good out there, the best I’ve felt in a really long time, so I was really happy,” he said.

Arizona State: At Colorado on Thursday in the middle of a three-game trip. The Sun Devils dropped the first meeting by 18 points.

UCLA: Visits Oregon on Thursday to open a three-game trip. The Bruins lost the first meeting by three points in overtime.