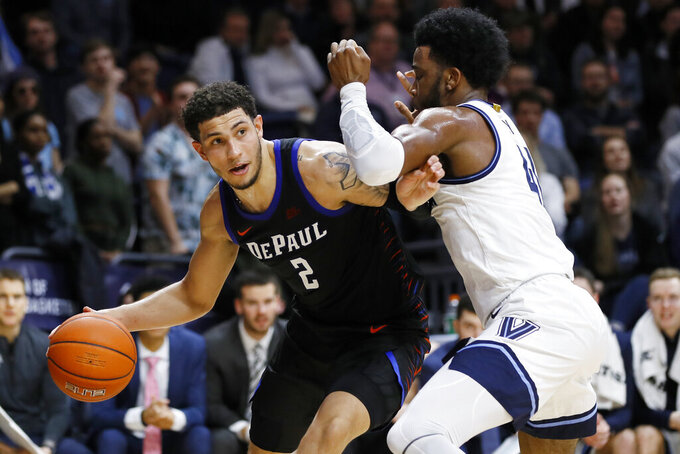 VILLANOVA, Pa. (AP) — Headed into overtime after blowing a big lead in regulation, Collin Gillespie had a one-word challenge for Villanova: Attitude.

With the national championship stars gone, a new era of Wildcats are finding out what they need to win in the rugged Big East, and Gillespie showed them the way.

Gillespie made four straight free throws in overtime and scored 21 points in 43 minutes, and No. 14 Villanova survived a scare to beat DePaul for the 19th straight time, 79-75 on Tuesday night.

“It's not like a Disney movie and it just happens," coach Jay Wright said. “It's going to be ugly at times, it's going to look good at times. Just hopefully at the end, we can be a really good team.”

The Wildcats (13-3, 4-1 Big East) trailed by 13 early and got a fight few expected from one of the perennial worst teams in the conference. DePaul's Charlie Moore made one free throw and intentionally missed the second with about a second left in OT, but the Blue Demons failed to score — or complete the comeback.

DePaul (12-5, 0-4) trailed by 11 points with 2:14 left in regulation, one more loss against one of the nation's elite a mere formality. But the Blue Demons showed grit down the stretch they rarely played with in the series against the Wildcats. Moore buried a 3 to start the rally and Jalen Coleman-Lands connected on a corner 3 with 31.5 seconds to go that made it 67-65 and silenced the Villanova crowd.

Moore scored the tying basket after Villanova threw away the ball on the inbound play, and Villanova missed a shot to win at the buzzer.

Gillespie steadied the Wildcats in OT and they won for the 10th time in 11 games. Saddiq Bey scored 18 points, and Jeremiah Robinson-Earl had 13 points and 13 rebounds.

“That's what a season is, you go through experiences like that and you learn how to trust each other in tough situations,” Wright said.

The Wildcats could not shake the pesky Blue Demons and were stuck tied 40-all midway through the second half. Moore hit five 3s and scored 29 points for DePaul and Paul Reed had 18 points and 15 rebounds.

The Wildcats were 10½-point favorites for a reason, undefeated against DePaul since Jan. 3, 2008. To put that in perspective, that was two national titles and a renovated arena ago for the Wildcats.

DePaul showed a flicker of improvement with a 12-1 start to the season, highlighted by an overtime victory against national title game finalist Texas Tech, only to drop the first three games of the Big East play.

Against the Wildcats, DePaul came ready for an upset. The Blue Demons stunned Villanova early, and when Moore buried a 3 from the top of the arc and Nick Ogenda followed with a second-chance layup, they led 21-8 and forced Nova to call timeout. DePaul used a 9-0 run and Villanova missed nine of 10 shots over a 3-minute span to make this one a ballgame.

Villanova's Cole Swider hit a 3 that ended the scoring drought and kickstarted a 22-7 run to close the half. Gillespie hit back-to-back 3s, sank two free throws and buried a 3 after DePaul was whistled for an offensive foul, and suddenly the Wildcats were within two. Swider tied it on two free throws and Bey sent the Pavilion into a frenzy with a big bucket down low that sent the Wildcats into halftime with a 30-28 lead.

“I think we just need to start to learn how to compete for a full 40 minutes,” Gillespie said.

DePaul: Reed had his 12th double-double, tops in the Big East.

Former Wildcats Kyle Lowry (2004-06) and Ryan Arcidiacono (2012-16) will have their jerseys retired in separate ceremonies this season. Lowry, an NBA champion with the Toronto Raptors, will be honored on Feb. 26 and Arcidiacono on Feb. 12. Villanova will now have retired 23 former jerseys, including 18 players, three coaches and long-time trainer Jake Nevin. Paul Arizin's No. 11 is the only retired number in program history.

“We've just got to win," DePaul coach Dave Leitao said. “We're 0-4 and we had four games that could have went either way. Each one, at whatever point late in the game, were one-possession games.

"We've got to be able to understand how over the course of the game we don't get to that point. And then we've also got to understand when we're in that mode in late games, how to do a good job of making sure the other team doesn't score and get positive results on offense.”