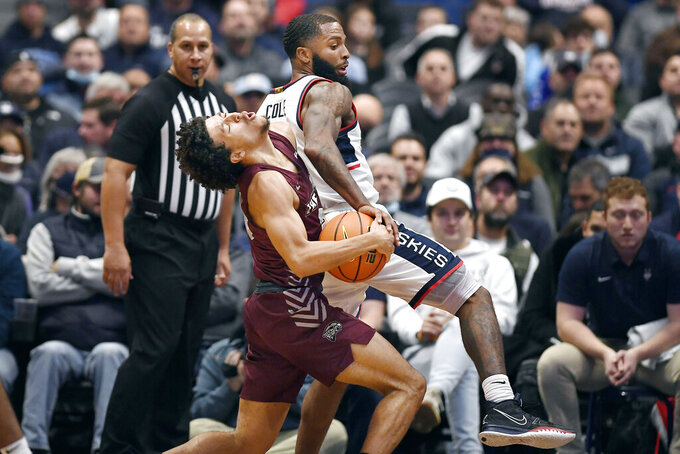 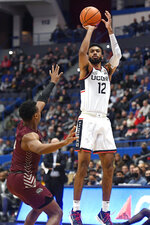 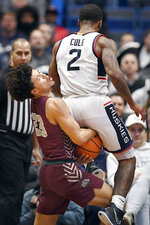 HARTFORD, Conn (AP) — With the rest of his team struggling or injured, UConn guard R.J. Cole took it upon himself to carry the Huskies past an opponent they were expected to handle easily.

Cole, a transfer from Howard, scored 25 points and No. 17 UConn survived a challenge from Maryland-Eastern Shore to win 72-63 on Tuesday night.

Tyler Polley added 14 points for the Huskies (7-1), who jumped five spots in the AP Top 25 after a third-place showing over the holiday weekend in the Battle 4 Atlantis.

UConn was sluggish for much of the night against UMES, which entered as a 33-point underdog, according to FanDuel Sportsbook.

“I felt like we were just lackadaisical out there,” Cole said. “So just being a leader of the team, it was on me to spark some energy and eventually, throughout the game, coach just told me I had to take over."

The Huskies led 39-31 at halftime, but didn’t score for the first 4 minutes of the second half and saw their lead cut to 42-41 on a 3-pointer by Da’Shawn Phillip.

A tip-in by freshman Jordan Hawkins off a missed free throw helped UConn during a 14-5 run that extended their lead to 11 points.

UMES had one more run, cutting the lead to 66-62 on a step-back jumper by Chace Davis, but the Huskies held on.

“Obviously, I did a horrible job preparing these guys to play this game and I will not allow us to look like that again or else you'll see a different group of people on the court,” UConn coach Dan Hurley said.

The Hawks hung with UConn through the first half by hitting 12 of their 24 shots from the floor and outrebounding the Huskies 14-11.

Polley’s 3-pointer just before the buzzer sent UConn into the locker room with a 39-31 lead.

Phillip and Mike Mensah each had 12 points and Styles added 11 for UMES.

“They average almost 90 points a game, we held them in the 70s,” UMES coach Jason Crafton said. “We said if we are in the 70s it’s going to be a game, and we did that. We just need to be a little better on offense executing down the stretch.”

Maryland-Eastern Shore: UMES, which doesn't have a starter over 6-foot-5, was outrebounded just 33-30 by UConn.

UConn: The Huskies played without starting guard Tyrese Martin, who had a cast on the left wrist that he sprained in their win over Auburn in The Bahamas. Hurley said Martin may have an avulsion fracture and could be out several weeks.

“We had to force him into the cast,” Hurley said. “I just want to see a team here that's obviously going to have to collectively come together and find some of that toughness and griminess and force that Tyrese played with.”

Center Adama Sanogo (eight points) left the game in the second half with an abdominal injury and did not return. Hurley said it's not clear how serious that injury might be.

UConn, which averaged 18.3 turnovers in its three games in The Bahamas, had seven against UMES, leading to eight points. The Huskies, meanwhile, forced 13 giveaways from the Hawks, which turned into 15 UConn points.

UConn's rise in the polls could stall with a less-than-impressive win.

Maryland-Eastern Shore: The Hawks finish a five-game trip with a visit to Lehigh on Saturday.

UConn: The Huskies are back on campus Saturday to host Grambling.