No. 20 Loyola cruises to 73-49 win over Southern Illinois 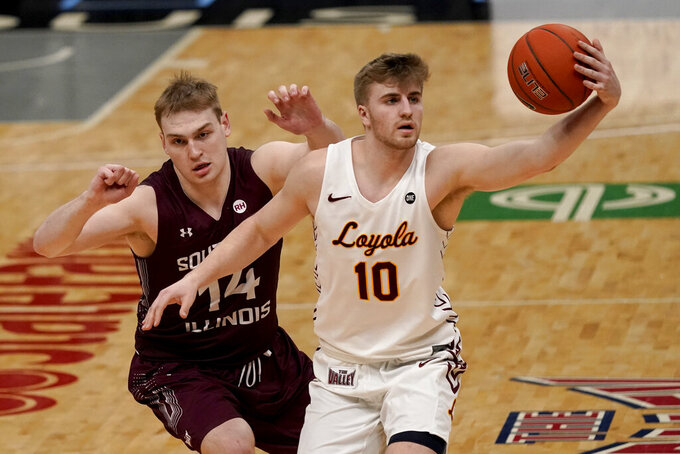 Loyola of Chicago's Tom Welch (10) controls the ball as Southern Illinois' Kyler Filewich (14) defends during the second half of an NCAA college basketball game in the quarterfinal round of the Missouri Valley Conference men's tournament Friday, March 5, 2021, in St. Louis. (AP Photo/Jeff Roberson)

ST. LOUIS (AP) — Freshman Jacob Hutson had 13 points and Lucas Williamson and Braden Norris each added 11 and No. 20 Loyola earned a 73-49 win over Southern Illinois on Friday in the quarterfinals of the Missouri Valley Conference Tournament.

“We always talk about wanting to set the tone early,” Williamson said. “We always want to hang our hat on defense. It just sets the tone for the rest of the game.”

Hutson had never scored more than four points against a Division I opponent prior to this game.

“We have a lot of confidence in him," Loyola coach Porter Moser said. “That kid's development from the beginning of the year to this year is really, really great to see and well needed.”

The Ramblers have won three straight games against Southern Illinois (12-14) after sweeping a two-game set in Chicago to close out the regular season.

The Salukis were playing without guard Lance Jones, who was injured in the first half of Thursday night’s game against Bradley. Marcus Domask, the Missouri Valley Conference Freshman of the Year in 2020, also missed the final 16 games with a left foot injury.

“We kind of have a saying, we're all we got, we're all we need,” Salukis guard Trent Brown said. “It's just always the next man up. There's no quit in any person on our team.”

The 49 points for the Salukis were a season low.

“Give a ton of credit to Loyola, they're one of the best defensive teams in the country,” Salukis coach Bryan Mullens said. “That first eight minutes of the game we had some looks, some 3s, some post-ups that didn't drop, and they were able to gain some confidence offensively and defensively.”

Southern Illinois: The Salukis are 0-16 in their past 16 games versus ranked opponents, extending the longest such losing streak in school history. Their most recent win versus a ranked foe was a 64-62 triumph at home over then-No. 23 Wichita State on Feb. 5, 2013.

“We're creating a different story this year,” Moser said. “It was more not hanging over our head. It was more motivating us. That's going to make us better.”

Ramblers seniors Williamson and Cameron Krutwig continue to build on their mark as the winningest four-year players in school history with their 95th career wins.

With Jones’ injury, sophomore guard Trent Brown became the only Salukis player to start all 26 games this season.

Loyola: Faces the winner of Evansville versus Indiana State in semifinals Saturday.