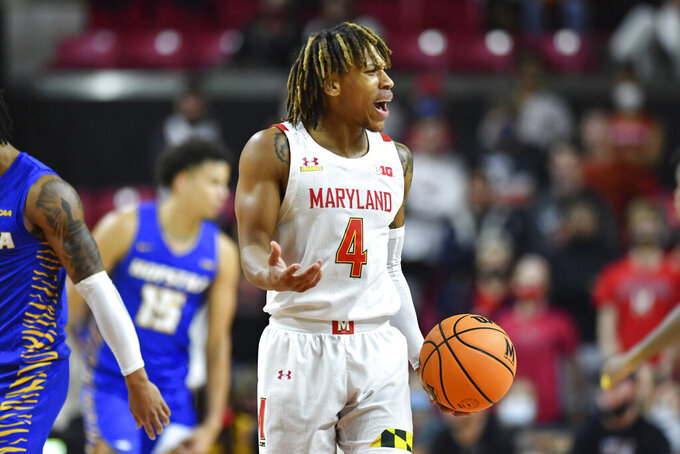 Maryland guard Fatts Russell (4) reacts to a double-dribble call during the first half of an NCAA college basketball game against Hofstra, Friday, Nov. 19, 2021, in College Park, Md. (AP Photo/Terrance Williams)

COLLEGE PARK, Md. (AP) — Eric Ayala made big plays at both ends of the court to help Maryland avoid another surprising loss.

Ayala's driving layup tied the game with 23.3 seconds left, then he blocked a shot moments later. Ian Martinez was fouled as he went for the loose ball, and his two free throws with 4.2 seconds to play gave the 20th-ranked Terrapins a 69-67 victory over Hofstra on Friday night.

“Eric made a big-time defensive play. That's just the type of player he is,” Maryland guard Fatts Russell said.

With the score tied and the shot clock off, Hofstra (1-3) had the ball, but Omar Silverio’s deep 3-pointer was blocked by Ayala. When Silverio instinctively went for the loose ball, he fouled Martinez.

“He took the shot. It is what it is at this point. We've got to move on and we've got to live with it,” Hofstra coach Speedy Claxton said. “But no, that's not the shot I wanted.”

After Martinez made both free throws, Maryland (4-1) used its last foul to give near midcourt with 3.2 seconds left. Hofstra was unable to get the ball inbounds cleanly after that. Maryland’s Julian Reese knocked the inbound pass back out, leaving 2.2 seconds left, then Russell stole the next inbound pass and the clock ran out.

Ayala led Maryland with 14 points but went just 5 of 17 from the field.

Maryland scored the game's final six points after a 3-pointer by Ray put Hofstra up 67-63. Reese scored on an offensive rebound to make it 67-65, and Ayala's layup tied it.

“We’re a work in progress, but that’s a good team,” Terps coach Mark Turgeon said. “For us, where we are right now, it’s a great win for us.”

Hofstra was without forward Jarrod Simmons (leg injury) and forward Abayomi Iyiola (COVID-19 protocols). The Pride fell behind by seven early in the second half but were able to rally and lead late.

“Just moving the ball, playing as a team,” Ray said. “We had to use our speed.”

Hofstra: The Pride came close, but lost again in a tight game against a well-regarded opponent. Hofstra lost its opener this season to Houston in overtime.

Maryland: The Terrapins clearly had a lot of work to do after losing to George Mason 71-66 on Wednesday, and this game did little to dispel that conclusion. But they defended well enough to win and made enough big plays late.

“Our body language was better, our togetherness was better tonight,” Turgeon said. “They never quit, but we never quit, so it's a step in the right direction.”

“They're really hard to guard, and we made a decision that we were going to go small," Turgeon said. "We haven't practiced a small lineup at all, but I thought it was the best way to win.”

Maryland was probably on its way to dropping out of the Top 25 after the loss to George Mason, and this game wasn't exactly a resounding answer from the Terps — but they did get the win to limit the damage for the time being.

Maryland: Plays Richmond on Thursday night at the Baha Mar Hoops Bahamas Championship. It's the Terrapins' first game away from home this season.