No. 6 Kansas visits rival Mizzou for first time in 10 years 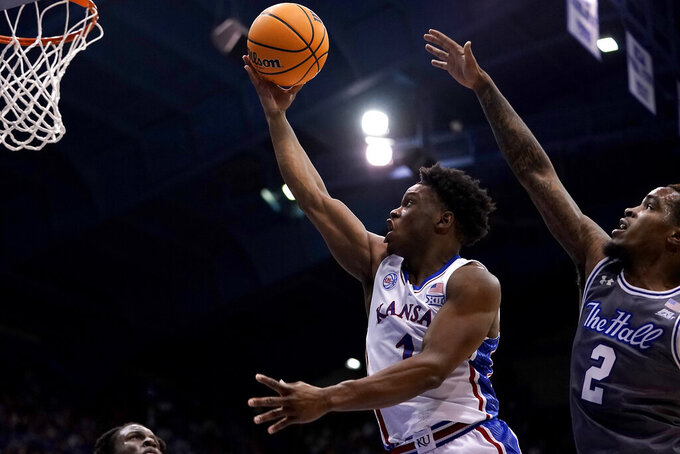 Kansas guard Joseph Yesufu (1) gets past Seton Hall guard Al-Amir Dawes (2) to put up a shot during the first half of an NCAA college basketball game Thursday, Dec. 1, 2022, in Lawrence, Kan. (AP Photo/Charlie Riedel) 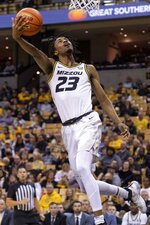 LAWRENCE, Kan. (AP) — Dajuan Harris Jr. grew up in the shadows of the University of Missouri, and he played his prep basketball at Rock Bridge High School, just a short drive down South Providence Road from the heart of the college campus.

Imagine what folks back there thought as they watched him lead Kansas to the national championship last season.

Harris will no doubt get an earful from them Saturday, along with the rest of the sixth-ranked Jayhawks, when they head across the state line for the first time in nearly a decade. Kansas is set to face unbeaten Missouri in the latest renewal of one of the most bitter rivalries in college sports.

“When I grew, I had some family members that don't like KU,” Harris admitted. “But really, KU has always been the best. The people that I've been around, they didn't really care about me going to KU. It was just the outside people that be saying stuff. My family really don't care about that stuff.”

There are plenty of people that do.

The series known as the Border War traces its history to actual war: guerilla fighting in western Missouri and eastern Kansas in the 1850s and '60s over whether slavery would be legal in the proposed state of Kansas. Dozens died during the frequent raids and skirmishes, and names such as William Quantrill became famous if not notorious.

Fierce competition between Missouri and Kansas — the schools, not the states — likewise built to fevered pitch over more than a century. Longtime Tigers coach Norm Stewart so despised Kansas that he instructed bus drivers to fuel up before crossing the state line lest they spend a penny in the Sunflower State. And the Tigers' notorious student section, known as the Antlers, have a penchant for calling up Kansas players and coaches at all hours of the night before games.

“Missouri-Illinois is a good rivalry. I thought there was a little bit of respect in that rivalry,” said Jayhawks coach Bill Self, who spent three seasons with the Illini before taking over Kansas and winning a pair of national titles.

“With Kansas-Missouri,” Self said, “from a fan standpoint, I don't know if there's as much respect as there is flat-out dislike or hate. And I think that's what makes it a great rivalry. I don't think you could have Larry Brown or Norm Stewart or Roy Williams or Quin Snyder or Dennis Gates or myself enjoy a rivalry as much without those emotions involved.”

Self claimed to have never had a bad experience playing at Missouri, though he did acknowledge “getting our butts beat there before.” The Jayhawks lost the last time they played in Columbia on Feb. 4, 2012.

The schools played again that season in Lawrence and Kansas won, but they didn't meet on the hardwood again until last year. That's because for nearly a decade, Self steadfastly refused to play the Tigers, who put the Big 12 in peril when they joined Texas A&M in jilting their longtime conference home for the Southeastern Conference.

When the series resumed, the Jayhawks took out any lingering angst on the hapless Tigers with a 102–65 victory at Allen Fieldhouse. It was the most lopsided result in the long-simmering feud in more than 40 years.

“When we play Kansas State,” Self said, “it's a rivalry, make no mistake. But it doesn't feel quite the same as the historic rivalry that's existed between Missouri and Kansas, going way back before the universities even had basketball teams.”

The teams no longer play twice a year, so the history — or hatred — is not as naturally ingrained. But even players that grew up in South Carolina or Texas or some other far-flung locale eventually learn about it, whether by lessons from the coaching staffs or messages passed on to them by former players.

“This is one that people have circled,” said Gates, who's in his first season coaching the Tigers, “and they make plans to be back, and it's exciting, man. It's one of the longest-standing rivalries. There's some historical perspective in it as well, non-basketball. But it's a rivalry that I think college basketball should continue to have.”

All rivalries are better when there's something riding on the outcome, and there is much at stake this season.

The Jayhawks (8-1) are again among the nation's top teams, while the Tigers — led by their soft-spoken yet confident coach and an influx of Division I transfers — are 10-0, one of the last 10 unbeaten teams in men's major college basketball.

“We know it's going to be a big-time game. There's going to be a lot of people here,” said Missouri guard Nick Honor, a transfer from Clemson. “The biggest thing is pride. Getting those bragging rights for the next year.”