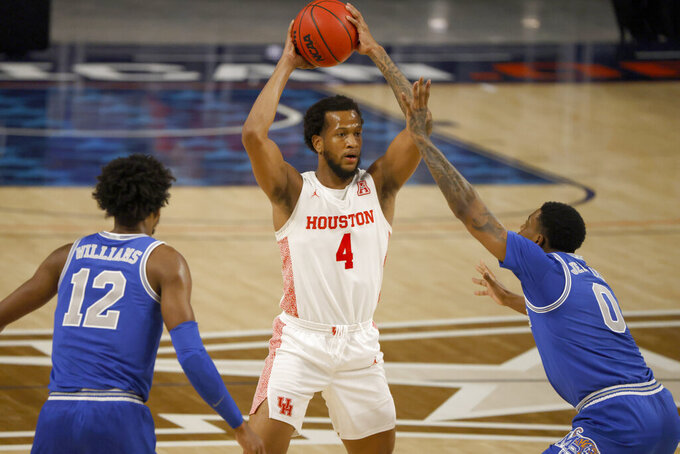 Houston forward Justin Gorham (4) looks to pass as Memphis forward DeAndre Williams (12) and Memphis forward D.J. Jeffries (0) defend during the second half of an NCAA college basketball game in the semifinal round of the American Athletic Conference men's tournament Saturday, March 13, 2021, in Fort Worth, Texas. (AP Photo/Ron Jenkins) 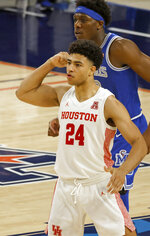 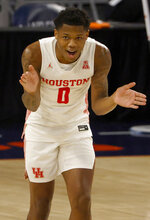 FORT WORTH, Texas (AP) — Quentin Grimes kept making big shots for No. 7 Houston, and then Justin Gorham secured a third consecutive appearance for the Cougars in the American Athletic Conference Tournament championship.

Grimes had 21 points with five 3-pointers for the Cougars (23-3), who are already a lock for a spot in the NCAA Tournament. Gorham finished with 15 points, and Marcus Sasser had 14.

Boogie Ellis scored 27 points for Memphis, but he had a huge turnover with 49 seconds left. He fell down with the ball when trying to respond to the Gorham layup that put the Cougars back in front 72-71.

Gorham added his free throws before Ellis made a running 3-pointer just before time expired. The last free throws for Gorham came after being fouled rebounding a missed 3 by Ellis with 4 seconds left.

DeAndre Williams had 16 points for Memphis (16-8), an NCAA bubble team which overcame a 12-point halftime deficit and led by four with just over five minutes left. That was only seven days after losing in Houston on a game-ending banked 3-pointer after tying that game with 1.7 seconds left.

“It’s crazy right now,” Memphis coach Penny Hardaway said of his emotions postgame. “Just hard to accept having the game won and knowing what was at stake, and not being able to pull it through.”

Houston coach Kelvin Sampson said he knew both of those games would be difficult against the Tigers.

“We could have won both, and we did. We also could have lost both, but we didn’t,” he said. “So the fact that we’ve found a way to win different ways, Memphis has got some really talented kids.”

Hardaway, in his third season coaching at the school where he was a standout player, said he is “just praying” that the Tigers have shown enough to be an at-large selection Sunday.

“It’s a tough loss. The whole season we’ve been working to try to get to the NCAA Tournament,” Ellis said. “This game, we needed it bad.”

The Cougars are looking for their first conference tournament title since 2010 in Conference USA when Tom Penders was their coach. They play Sunday against fifth-seeded Cincinnati, which beat regular-season champion Wichita State 60-59 in Saturday’s other AAC semifinal.

“Both teams are playing for a championship tomorrow, not the automatic qualifier,” Sampson said.

Williams had 10 points when Memphis opened the second half with a 17-5 run, getting even at 46-all on his jumper with 10:45 left that ended his personal 6-0 run.

Grimes had a fast-break dunk with 17 minutes left, but the Cougars missed seven shots in a row until Grimes made a 3-pointer with 8:55 left, right after Ellis made a 3. Ellis and Grimes traded quick 3-pointers again only a couple of minutes later.

Memphis: The Tigers were again without guard Alex Lomax because of a left ankle injury. Memphis hasn’t been to the NCAA Tournament since 2014. Memphis is 7-2 since January, with the only losses in that span being to the AAC’s only ranked team within a week.

Houston: The Cougars converted eight Memphis turnovers into 14 points before halftime, the last on a buzzer-beating breakaway dunk by Grimes after he stole the ball from Ellis. ... Houston had an early 11-0 run bookended by a pair of 3-pointers by Sasser.

The AAC championship game Sunday in only the second meeting this season between the teams. Houston beat the Bearcats 90-52 at home on Feb. 21.