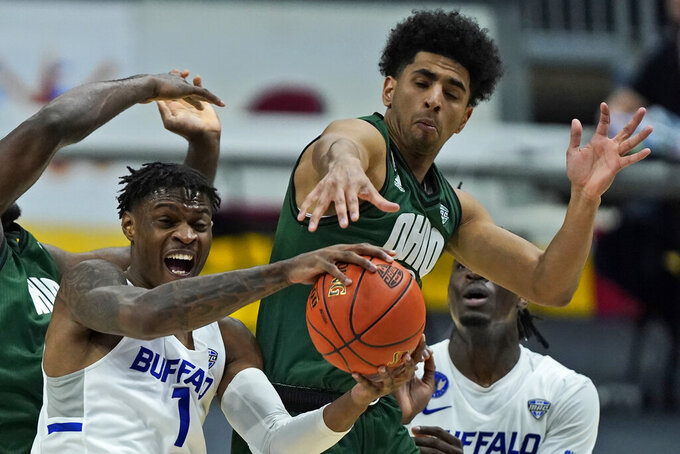 Buffalo's LaQuill Hardnett, left, grabs a rebound ahead of Ohio's Ben Roderick during the second half of an NCAA college basketball game in the championship of the Mid-American Conference tournament, Saturday, March 13, 2021, in Cleveland. (AP Photo/Tony Dejak)

CLEVELAND (AP) — Last March, the Ohio Bobcats were on the floor warming up for their quarterfinal opener when they were told the tournament was cancelled.

Nothing stopped them this year.

Jason Preston scored 22 points and Ohio dominated from the start to win its first Mid-American Conference Tournament championship since 2012, an 84-69 victory on Saturday night over Buffalo, which was trying for a record third straight title.

The Bobcats (16-7), whose season was temporarily put on hold by COVID-19, are in the NCAA Tournament for the first time since 2012, when they shocked Michigan on their way to the Sweet 16. They'll receive the league's automatic bid when the seedings are announced Sunday night.

“It's so surreal,” said Preston, who was named the tournament's most outstanding player. “We've had this goal. We really wanted it. I'm so grateful to be here right now.”

Gratitude was a common feeling for all of Ohio's players. Before coming to Cleveland and playing on Thursday in the quarterfinals, the Bobcats had just three games over a 36-day period after several postponements or cancellations due to the pandemic.

But in just their second year under coach Jeff Boals, an Ohio alum, the Bobcats put together a remarkable three-day run.

First, they knocked off No. 4 seed Kent State by 22 in the quarterfinals. Then they toppled top-seeded Toledo in the semis before throttling Buffalo, the closest thing the MAC has to a dynasty after winning four titles since 2015.

For Boals, winning the title at his alma mater makes it even more special.

“I wanted these guys to experience the same things that I experienced,” said Boals, a captain on Ohio's 1994 NCAA team. “This is going to be a memory of a lifetime. They'll be bonded for a lifetime.”

Ben Roderick added 20 points and Dwight Wilson III 17 for No. 5 seed Ohio, which built a 20-point halftime lead, stopped a Buffalo comeback and won its seventh MAC title. The Bobcats led by double digits for 34 minutes.

When Buffalo's hopes were extinguished and as the final seconds ticked off the clock, Ohio's players, who spent most of the night wildly waving towels, joined fans to chant “O-U, Oh, yeah!” before the Bobcats bounced around the floor in celebration.

Ronaldo Segu scored 24 to lead the Bulls (16-8) and Josh Mballa had 16 and 11 rebounds for Buffalo, which couldn't overcome a sloppy start.

A year ago, the Bobcats were on the Rocket Mortgage FieldHouse floor getting ready to play Akron when they were informed the tournament was off. Uncertain of what lie ahead, they got in one last scrimmage.

“I was just sitting in the same locker, same chair as last year,” Boals said, reflecting on 2020. “Everyone's world changed in that minute.”

After losing to Buffalo by 20 on Feb. 27, Ohio's final two regular-season games were called off. The 12-day break meant their legs were fresher than the other teams in Cleveland.

So is having Preston.

The junior guard did a little of everything, adding seven assists, six rebounds, and five steals in the title game.

The second-seeded Bulls were appearing in their fifth MAC final since 2015, and were technically the defending champions after winning the tourney in 2019. But Buffalo started poorly, never found its rhythm and may have been feeling the effects of going to overtime with Akron on Friday.

“They were just sharper than us tonight,” said Buffalo coach Jim Whitesell. “We just didn't get it done.”

Buffalo, which had won 13 of its previous 14 games in Cleveland, got within 52-42 midway through the second half. But just when it looked like things were getting interesting, Preston put Ohio back in control.

He fed Ben Vander Plas for a 3-pointer and squeezed a pass inside to Wilson, who was fouled and completed the three-point play. Preston then drove and whipped a pass back to the top of the key for Vander Plas, who buried a long 3 and posed to admire his work.

“Those shots were huge,” Boals said.

When his name was called to accept the MAC title trophy, Boals, who has made a habit of dancing with his players in the locker room after big wins, busted out some moves to the delight of the Bobcats as he crossed the floor.

Preston and Vander Plas, who both considered leaving Ohio after a coaching change was made following the 2019 season, said Boals has delivered on every promised he's made.

Led by the relentless Mballa, Buffalo led the nation in rebounding last season. The Bulls came into the title game leading again this season, averaging 44.1 per game, and were second in offensive rebounds.

Ohio: Await their seeding for the NCAA field.