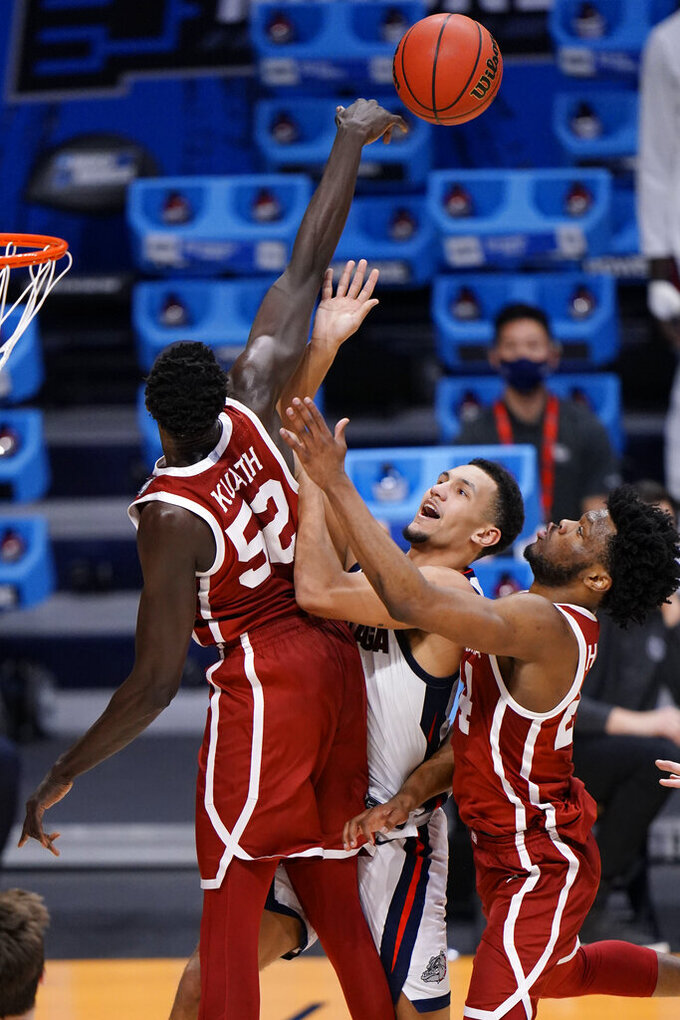 Gonzaga guard Jalen Suggs, middle, gets his shot blocked by Oklahoma forward Kur Kuath (52) in the second half of a college basketball game in the second round of the NCAA tournament at Hinkle Fieldhouse in Indianapolis, Monday, March 22, 2021. (AP Photo/AJ Mast) 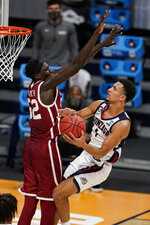 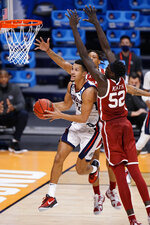 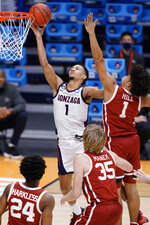 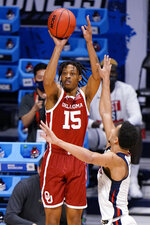 INDIANAPOLIS (AP) — Mark Few sat down at the microphone, the Gonzaga coach's hair disheveled after he was doused with water and threw down a celebratory handstand in the locker room.

Even after 32 straight wins dating to last season, the Bulldogs are relishing their triumphs during an NCAA Tournament run that can only conclude in two ways: perfection or disappointment.

“We've been celebrating every one of these wins. We celebrated the other night. We celebrated this one. If we’re lucky enough to get another one, we’re going to celebrate like crazy for that one,” Few said. “This tournament needs to be celebrated, man.”

The way Gonzaga is playing, it wouldn't be surprising if there were more celebrations to come — four of them, to be exact. Drew Timme scored a career-high 30 points and grabbed 13 rebounds, and the top-seeded Bulldogs beat No. 8 seed Oklahoma 87-71 on Monday in the second round.

A No. 1 seed, two No. 2s and two No. 3s have already been eliminated from this tournament. But Gonzaga (28-0) faces higher expectations as it tries to become the first undefeated champion since Indiana 45 years ago. In the 22nd season of his remarkably consistent career, Few is four wins away from his first national title.

“You gotta bring that fire because all it takes is one good game and you can be out,” Timme said.

The Bulldogs easily dispatched Norfolk State in the first round, but the Sooners were the first power conference opponent for Gonzaga since it embarrassed Virginia in late December.

It didn't matter all that much. Oklahoma became the 25th straight team the Bulldogs beat by double digits — although the Sooners fought valiantly to keep it from becoming a blowout. Few still had his starters on the floor at the buzzer and screamed at star Jalen Suggs for committing an unnecessary foul with 1:05 left.

The Zags advanced to their sixth straight Sweet 16 and will next face Creighton in the West Region. Gonzaga has won the past two meetings with Creighton.

“We’re not satisfied with this,” Timme said. “This is not the end goal.”

Austin Reaves scored 27 points for Oklahoma (16-11), and after trailing by 19 with 12 minutes left, the Sooners pulled within 77-68 on his 3-pointer with 2:37 left. It was the first 3 of the second half for Oklahoma and the first time the deficit was within single digits since late in the first half.

But Timme was perfect on four free throws sandwiched around a basket from Alondes Williams, and after an Oklahoma turnover, All-American Corey Kispert pushed the lead to 14 with his fourth 3-pointer.

“Thought we got a little better feel for the pace of things in the second half,” Oklahoma coach Lon Kruger said. “Cut into it a little bit. Couldn’t quite get back to make them too nervous.”

Timme, sporting a handlebar mustache, was 9 of 12 shooting and 12 of 14 at the free-throw line.

Kispert finished with 16 points, as did Suggs, who took an awkward tumble on a flagrant foul by Oklahoma’s Elijah Harkless in the closing seconds and had to be restrained by teammates. Joel Ayayi added 12 points, 10 in the first half.

Gonzaga closed the half on an 18-6 run to take control, doing it all with Kispert sitting after picking up his second foul. Ayayi, Timme and Suggs were the instigators offensively, but just as important was continuing to stymie the Sooners after Reaves re-entered the game.

The Sooners trailed 33-30 after Harkless scored, but Suggs answered with a 3 and the Bulldogs scored 13 of the final 17 points to take a 46-34 lead at the break.

“Our defense has been good, pretty dang good all year,” Few said. “I think our offense has been at a historical level so it gets a lot of the pub.”

Williams finished with 15 points for the Sooners and Jalen Hill added 11, but Oklahoma sorely could have used second-leading scorer De’Vion Harmon. He tested positive for COVID-19 upon arrival in Indianapolis.

The last time Gonzaga was eliminated before the tournament's second weekend was in 2015, when the Bulldogs were a No. 8 seed.

Oklahoma failed to reach the second week for the third straight tournament appearance since reaching the Final Four in 2016.

The Sooners lamented a late skid in which they lost five of six games and cost themselves a much better seed that would have helped them dodge an opponent like Gonzaga until later in the tournament.

“We kind of did it to ourselves down the stretch of the regular season ... put ourselves in that situation,” Reaves said. “But on the other end of it, you got to beat really good teams anyway.”