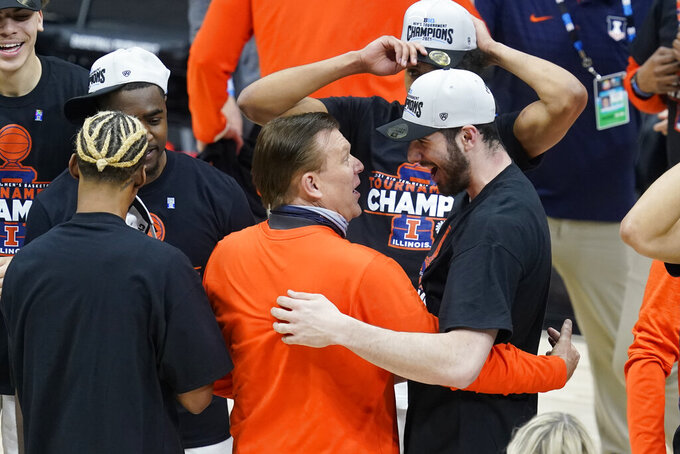 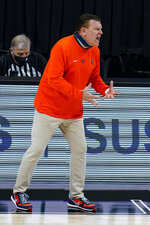 Brad Underwood arrived at Illinois in the spring of 2017 tasked with trying to restore some of the swagger to a program that had become an afterthought in the Big Ten.

He preached patience. He preached recruiting kids with character instead of kids who are characters. He talked about creating a culture built on hard work and becoming a family.

And then he lost his first game. On the road. By double digits. To Eastern Illinois. Whatever honeymoon period he might have had ended at the final horn, replaced by the stark reality of the work that lay ahead.

“Oh, I'd be lying if I said there wasn't a lot of ‘uh-oh’ moments,” Underwood said Wednesday.

Just not enough to dent the relentless optimism the 57-year-old has carried with him during a career that's included head coaching stops in Dodge City and Daytona, a spot at the end of Bob Huggins' bench at Kansas State and three spectacular seasons turning Stephen F. Austin into NCAA tournament darlings.

On Friday it will take the former player who relished being the underdog to another place entirely: as the top seed in the NCAA's Midwest Region following a sprint through the nation's toughest conference that ended with the Illini's third Big Ten Tournament title.

Illinois (23-6) will face 16th-seeded Drexel on Friday in a region that — at least on paper — isn't quite as daunting as the slate the Illini navigated on their way to cutting down the nets at the Lucas Oil Stadium last Sunday after outlasting Ohio State in overtime.

“I’ve never feared or thought about not being here,” Underwood said after his team fended off the Buckeyes for 13th time in 14 games.

Why would he? This is a man who amended his favorite mantra from “Dream Big” to “Dream Bigger” when reality kept surpassing his expectations.

The ultimate dream awaits. It's one the Illini are a serious threat to make a run at thanks to a roster of seemingly disparate parts — at least off the court if not on it — that has turned into a brotherhood.

Sophomore center Kofi Cockburn likes to cook dinners with recipes gleaned from his homeland in Jamaica. Junior forward Giorgi Bezhanishvili's grandparents watch — possibly after gaining access to a streaming service illegally — from their home back in Georgia. That's the country, not the state.

Cockburn and Bezhanishvili's rollicking postgame interview after Illinois fended off the Buckeyes offered a glimpse into the tenets Underwood has espoused from the day he arrived in Champaign. They spent more than 10 minutes arm in arm, cracking each other up in an attempt to see who could use the word “amazing” more to describe the experience. Bezhanishvili giving his grandparents a shoutout in Georgian to thank them for their support. Cockburn poignantly talking about his father Laffette, who died at home in Jamaica about a year after Kofi moved to New York.

“He believed in me when nobody did,” Cockburn said of his dad.

The same could be said about the Illini when Underwood arrived. The “uh oh” moments weren't limited to that lump-in-the-throat-inducing loss to Eastern Illinois. The Illini went 14-18 in Underwood's first season and 12-21 in his second.

The outside noise fought to overshadow the foundation Underwood knew he was building. The criticism stuck with junior All-American guard Ayo Dosunmu even as he climbed the ladder with a pair of scissors in hand last Sunday.

Dosunmu paused briefly before reaching to his right to grab the Big Ten trophy.

“This is what it all means,” he said.

Well, not quite. An even bigger goal awaits. The Midwest is solid but hardly overwhelming. Houston is the second seed and West Virginia the third.

No need to convince Underwood's former mentor that his team is good enough to win it all. Huggins got a look at what Underwood — whom Huggins hired as director of basketball operations at Kansas State in 2007 — could do with a roster not nearly as talented as the one he has now during the 2016 NCAA Tournament.

Underwood and 14th-seeded Stephen F. Austin smothered Huggins and the third-seeded Mountaineers 70-56, a game in which the Lumberjacks never trailed over the final 20 minutes. It's a defeat Huggins called “the worst loss I've ever had” in the tournament. As they shook hands at midcourt, the teacher pulled aside the student looking for insight.

“I talked to Brad afterwards about what they did to prepare and that kind of thing,” Huggins said.

There's really only ever been one answer for Underwood: work. He's won with teams that can score and teams that can defend. He's turned the Illini into one that can do both. It's a destination, however, that they only reached when they figured out the right answer to the question Underwood began asking the day he took the job.

Before each season he would poll his players and ask them what team plays the hardest in the Big Ten. Almost reflexively they would respond, “Michigan State.”

“They finally said, ‘us’ and we had to start believing in that,” Underwood said. “We had to project that out somehow. Be a team that plays hard. A team that is connected. A team that will execute and that’s what we’ve tried to be is a tough team that executes.”

Even if it isn't littered with players with one eye on the Illini and another on the NBA. Dosunmu — who Underwood said turned down millions by coming back for his junior season — is the exception.

“I don’t know if we’ll ever have a one and done,” Underwood said. “We may ... (but) we have guys who go live in the weight room. Guys come to our program know I’m going to coach them and love them and hug on them. That’s the family atmosphere ... we’ve fought really hard for what we have.”