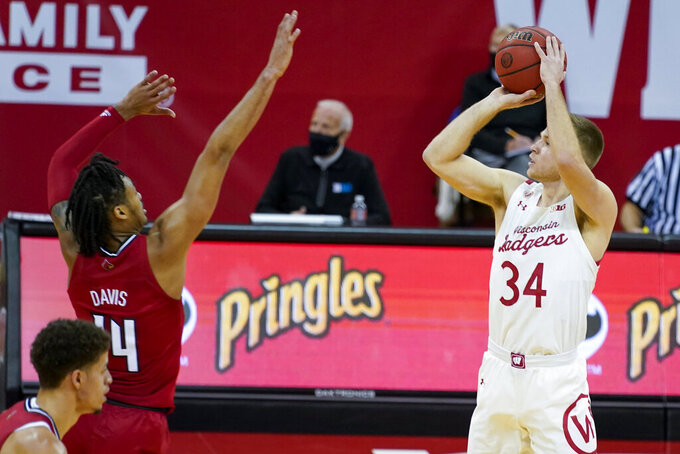 Micah Potter scored 20 points and Aleem Ford added 12 to lead the Badgers an 85-48 non-conference victory over short-handed No. 23 Louisville on Saturday in a rescheduled ACC/Big Ten Challenge game.

“We were thoroughly out-played, out-manned, out-toughed, out-coached,” Louisville coach Chris Mack said. “Wisconsin’s got a veteran crew. They played like a million bucks and didn’t miss a shot from the field. We never really offered resistance the entire way.”

The Cardinals, playing their first game since Dec. 1 after team activities were suspended due to coronavirus issues within the program, were without leading scorer Carlik Jones. The graduate transfer point guard, averaging 17.3 points, traveled with the team, but didn’t play.

Louisville (4-1), playing its first road game, originally had been scheduled to play at Wisconsin on Dec. 9.

David Johnson had 12 points and Quinn Slazinski 11 for the Cardinals.

“Obviously really pleased with the way we played,” Wisconsin coach Greg Gard said. “One of the more complete games we’ve probably played this year. Got a ton of contributions across the board. Everybody that stepped in there, I thought did a good job. I thought we got better, figured some things out as the game went on.”

The Badgers gained control early with 16 consecutive points, capping the run at 25-4 when Davison was fouled on a 3-pointer and added the free throw.

“He changes our team,” Mack said. “The ball-handling responsibilities don’t solely fall on him. It’s not going to make up whatever the deficit was. It is what it is. Those are the cards we’re dealt. Had we fought and done the things early in the game to give ourselves a chance going into halftime, then maybe the game’s different.”

Wisconsin relied on its 3-point shooting to extend the lead to 44-18 at the half. D’Mitirk Trice put the Badgers up 6-0 with a pair of 3-pointers. Wisconsin finished the half 10 of 17 beyond the arc, including three each by Trice and Davison.

Wisconsin led comfortably throughout the second half. Anderson’s 3-pointer capped a 13-0 run that put the Badgers up 80-38 with 3:40 remaining.

The Badgers shot 54.4 percent, making 31 of 57 shots, including 16 of 25 from three-point range. Wisconsin also scored 19 points off 18 Louisville turnovers.

Wisconsin’s victory gives the Big Ten a 7-5 lead in the ACC/Big Ten challenge and enables them to clinch it.

“When you get 22 assists, you’re not doing that by accident,” Gard said. “The ball’s moving. We played pretty well inside-out. We were able to touch the post, whether it was driving and kicking, touching the post and playing from within there. For the most part, we took pretty good shots. And when you take good shots, I trust if you give us enough of them, we’re probably going to knock a few down.”

Wisconsin should benefit from the lopsided victory over a ranked team, short-handed or not. Louisville probably will drop out of the Top 25.

Louisville: The youthful Cardinals need the leadership and experience of Jones as they rebound from the lengthy coronavirus-related hiatus.

Wisconsin: The Badgers have benefited from continuing to play with victories over Rhode Island and Loyola in games added to the scheduled after other games were canceled due to COVID situations.

Louisville is at Pittsburgh on Tuesday.