Potter leads No. 6 Wisconsin in rout of No. 21 Minnesota 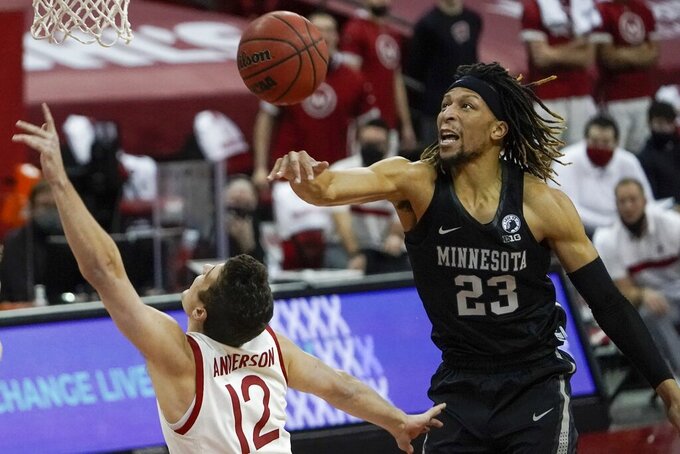 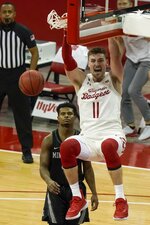 MADISON, Wis. (AP) — For Wisconsin, the difference between losing to Maryland and routing Minnesota all came down to energy.

“That was lacking in the Maryland game,” the Badgers' Micah Potter said. “I’m sure it was visible from where you guys are, where you watch the game. That was the biggest thing, just keeping the same energy that we had in the first half.”

Bouncing back from the loss to the unranked Terrapins, Potter had 18 points and 11 rebounds Thursday to lead No. 6 Wisconsin to a 71-59 victory over No. 21 Minnesota that wasn’t as close as the final score indicated.

The Gophers (9-2, 2-2 Big Ten) scored a season-low 22 points in the first half with a brutal shooting performance before the Badgers (9-2, 3-1) opened the second half on a 16-5 run. Potter added the exclamation point with a dunk off a pick-and-roll from D’Mitrik Trice that put Wisconsin up 45-27.

Wisconsin pushed the lead to 26 and Minnesota didn’t get the deficit under 15 points until the final minute.

Trice and Aleem Ford added 14 points apiece for the Badgers.

The Gophers missed their first nine 3-point attempts and started the game 3 for 20 from the field. Minnesota, which shoots 31% from 3 on the season, finished just 7 of 31 from behind the arc (23%).

Minnesota coach Richard Pitino credited Wisconsin’s physical style of defense and ball pressure, along with the Gophers settling too often for 3-pointers. The Gophers shot 31% from the field overall.

“We didn’t respond well by moving the ball. We were not where we were versus Iowa,” Pitino said, referencing a 102-95 win on Christmas Day. “We've got to get that thing flowing and moving side to side. Plus we got some good looks. We just didn’t knock them down.”

Point guard Marcus Carr makes the Minnesota offense go, averaging 21 points and six assists while shooting 48% from the field. But Wisconsin held him to 10 points as he shot 3 of 13, though he still dished out seven assists. Potter credited the defense that Trice and others played against Carr as the key.

After Monday’s loss to Maryland, Wisconsin coach Greg Gard lamented the Badgers’ failure to establish the post and settling for 3-pointers rather than working their offense inside out. He promised it would be addressed, and the Badgers got the message. Wisconsin didn’t attempt a 3-pointer until Potter knocked one down with more than six minutes gone in the game. The Badgers promptly missed their next four 3-point attempts, though they finished a solid 6 of 15 from the arc. They also had a 40-18 edge in the paint.

“That film session the next day was pretty harsh on a lot of guys,” Trice said. “But we took it, we learned from it and the next two days of practice were intense.”

Minnesota: Minnesota made a statement with its wins against Michigan State and Iowa in the past week. The Gophers have to hope Thursday’s game was an aberration.

Wisconsin: The Badgers bounced back after Monday’s loss to Maryland, returning to their roots of working the offense inside-out and playing solid defense, even if the latter got a significant assist from Minnesota’s poor shooting.

Wisconsin: The Badgers travel to Penn State on Sunday.