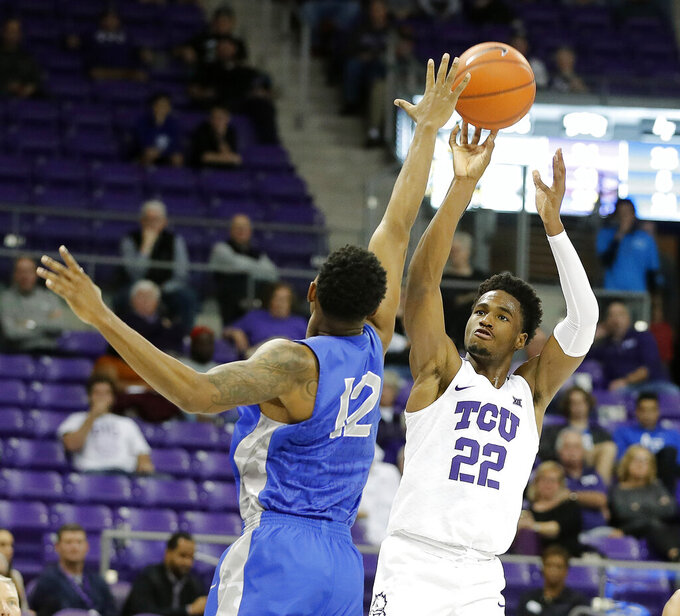 FORT WORTH, Texas (AP) — Kevin Samuel became the first TCU player in 25 years with three consecutive double-doubles to start a season, with a career-high 19 points and 11 rebounds in the Horned Frogs’ 65-54 win over Air Force on Monday night.

RJ Nembhard added 15 points and five assists while Francisco Farabello had 11 points for the Horned Frogs, who have started 3-0 in each of Jamie Dixon’s four seasons at his alma mater.

The last TCU player with three consecutive double-doubles to start a season was Kurt Thomas in 1994-95, when he started his senior season with seven in a row before becoming a first-round NBA draft pick and playing for nine teams over 18 seasons.

“Wow, just to hear that, it’s amazing,” said Samuel, the 6-foot-11 sophomore center from Barbuda, when told he had done something at TCU that hadn’t been done since before he was born.

TCU led 39-25 after a spurt in the final minute of the first half when Samuel had two highlight dunks on alley-oop passes from Nembhard, who then had a steal and a layup.

Air Force went into the half after Caleb Morris hit a long 3-pointer at the buzzer, putting the shot up a few steps after crossing midcourt.

The Horned Frogs had pushed their lead back to 14 after Samuel had three more baskets and Nembhard a 3-pointer in the first 3½ minutes of the second half before Air Force scored 11 points in a row.

“We got exactly what we thought, a disciplined, old, experienced good Air Force team that no one wanted to play,” Dixon said. “I think it made us better. I liked our defensive discipline, our patience.”

It was the first time TCU and Air Force placed since 2011-12, when they were in the Mountain West Conference together.

Lavelle Scottie, the senior forward from Fort Worth, started the late spurt by the Falcons with a dunk and added two free throws. A.J. Walker, another Texas kid, had a layup to get them within 48-45 before Desmond Bane’s breakaway layup.

But Air Force missed its next four shots after getting within 52-51.

“We couldn't get over the hump,” Air Force coach Dave Pilipovich said. “It was a great game for us though right now. Playing a quality Big 12 opponent on the road, I think we grew from it. As we move forward, this will definitely help us.”

Air Force: The Falcons, who returned all five starters from last year, were coming off their first road win ever at Army. But their only lead was 5-2 before a 3-pointer by Bane.

TCU: Bane, the Big 12’s top returning scorer from last year, had scored 26 and 25 points in the first two games. He was limited to seven points on 2-of-11 shooting (1 of 6 on 3s). He was back on the court shooting about a half-hour after the game.

TCU got a boost earlier Monday when Ohio State transfer Jaedon LeDee was granted an NCAA eligibility waiver to be able to play this season. The 6-foot-9 sophomore forward appeared in 26 games for the Buckeyes last season. In his TCU debut, he had four rebounds and a blocked shot while playing about 8½ minutes.

Air Force goes from Texas to the Bahamas where the Falcons play three games in four days. They play Loyola Marymount on Thursday.

TCU wraps up a season-opening four-game homestand on Thursday night against UC Irvine.