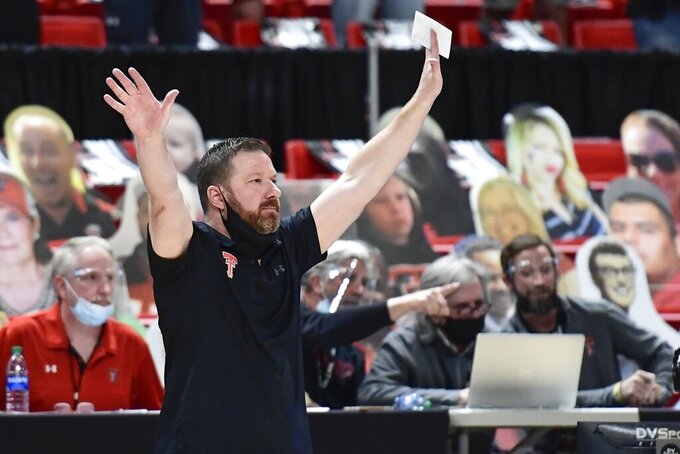 FILE - In this Feb. 27, 2021, file photo, Texas Tech head coach Chris Beard reacts on the sideline during the second half of an NCAA college basketball game in Lubbock, Texas Feb. Utah State and Texas Tech meet in a first-round game in the South Region on Friday. (AP Photo/Justin Rex, File)

Craig Smith proved his coaching chops early when he took one of the most challenging small-college jobs in the country in 2004.

Mayville State in North Dakota was coming off a one-win season when he was hired. With no paid assistants and Smith having to raise money himself to fund scholarships, the Comets made the NAIA Division II tournament his first season and the championship game his third.

“He can be a high major coach or he can decide to make Utah State his home and build a big winner in Logan," said former Nebraska coach Tim Miles, who had Smith on his staff at four schools over 11 years. "He’s going to have opportunities to move. There’s no doubt about it. I know a star when I see it, and he has the ‘it’ factor.”

Smith's trajectory resembles that of Chris Beard at Texas Tech. Beard was a Tech assistant from 2001-11 and had four head coaching jobs before taking over the Red Raiders in 2016. Three NCAA Tournament bids have followed, including the amazing 2019 run to the national championship game.

Both coaches have created cultures emphasizing strong defense and unselfish play. Utah State gives up just 62.4 points per game and is holding opponents under 40% shooting, and it's among the national leaders with 16.3 assists per game. Texas Tech allows a Big 12-low 63.4 points per game, forces an average of 16 turnovers and has five players averaging at least 8.5 points.

Smith and Beard have known each other since since Matt Mooney, an all-conference player for Smith at South Dakota, went to Texas Tech as a graduate transfer and was one of the stars of the 2019 Final Four.

“My respect for Utah State starts with Craig, somebody I consider a friend, somebody that I know in the business,” Beard said. "He did a great job at South Dakota before earning his next step at Utah State. He’s one of the best coaches in the country.

“When we recruited Matt Mooney, Craig was great to us during that transfer process. He’s a basketball guy that came up the right way. I’ve kind of followed his teams from afar.”

Smith and Beard's successes have come at schools many might consider geographically isolated. Logan, population 50,000, is in northeastern Utah about 85 miles north of Salt Lake City. Lubbock, population 250,000, is in northwest Texas and more than 250 miles away from the closest major city (Fort Worth).

“Lubbock isn’t for everybody, Logan’s not for everybody,” said Smith, who grew up in tiny Stephen, Minnesota. “Chris Beard loves Lubbock, Craig Smith loves Logan. Beauty is in the eye of the beholder. You have to recruit under rocks, you have to be open to a lot of different avenues whether it’s international recruiting, transfer recruiting, high school recruiting and anything in between. And then you have to really know who you are and look for those traits that fit your program.”

Smith has tapped into international recruiting heavily. Six players representing five countries outside the United States are on the 15-man roster.

That includes 7-footer Neemias Queta out of Portugal. The All-Mountain West first-team pick and two-time conference defensive player of the year encapsulates the Aggies' mantra. He's the only player in the country with more than 65 blocks (90) and more than 65 assists (71).

Though the turnaround wasn't to the scale as the one he orchestrated at Mayville State, Utah State was immediately elevated under Smith.

The Aggies were above .500 in Mountain West play only once in the five years before his arrival. Smith assembled the conference's top-ranked recruiting class his first year and won a share of the regular-season title and the conference tournament.

They won the conference tournament again last year for a second straight NCAA automatic bid, but the national tournament was canceled because of the pandemic.

Utah State lost three starters, including NBA draft pick Sam Merrill, and went into this season with eight players who had never played a minute for the Aggies. They started 1-3. Smith tested positive for the coronavirus and missed a three-point loss to BYU. Five games were postponed or canceled and starting guards Rollie Worster and Brock Miller battled injuries.

“In my mind," Miles said, “he did his best coaching job as a head coach so far.”

Smith in December signed a six-year, $5 million contract. That hasn't stopped is name from being mentioned for bigger jobs, most recently the one at Minnesota. Beard has been connected to the Indiana opening, among others.

“Coach Miles always taught me at a young age to be where your feet are,” Smith said. “I love to coach, I love where I’m at, and just (try to) make the big-time where you are. Put everything you’ve got into this team, your team, and make it the best it can possibly be, and then whatever happens happens.”