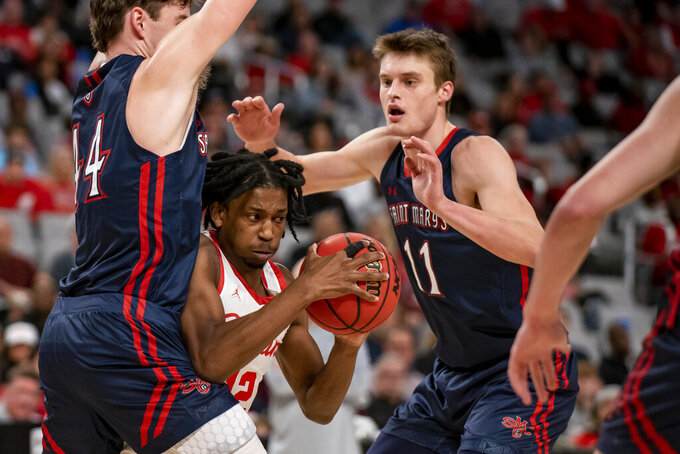 Houston guard Tramon Mark (12) attempts to get through the defense of Saint Mary's guard Alex Ducas (44) and center Mitchell Saxen (11) during the first half of an NCAA college basketball game in Fort Worth, Texas, Saturday, Dec. 3, 2022. (AP Photo/Emil Lippe)

FORT WORTH, Texas (AP) — The high-flying tag for these Houston Cougars means something a little different than it did the last time they were ranked No. 1 nearly 40 years ago.

It's about blocks these days, rather than dunks.

The Cougars (8-0) won twice in their first week as the No. 1 team since the final poll of the 1982-83 regular season, when Clyde Drexler and Hakeem Olajuwon led high-scoring Phi Slama Jama.

Houston is elite on defense now, holding yet another team to less than 40% shooting and getting a key block when Reggie Chaney soared to stuff a layup try in the final seconds, ending any chance of a comeback.

Roberts had two of Houston's six blocks, and eight rebounds.

“When you get two really good defensive teams playing against each other, that's what it looks like,” Houston coach Kelvin Sampson said. “It had nothing to do with each team's offense.”

Logan Johnson scored 17 points and Aidan Mahaney had 14 for the Gaels (6-3), who lost their third in a row following a 6-0 start.

Houston was the favorite to win it all in the second of three consecutive trips to the Final Four in 1983, but lost to Jim Valvano and North Carolina State in one of the iconic championship games.

Sampson's first top-ranked team is coming off trips to the Final Four and Elite Eight the past two seasons. The school is still seeking its first championship.

For the third straight year, the postseason path will start at Dickie's Arena, where Sampson likes to bring his team during the regular season as prep for the American Athletic Conference tourney.

This victory in the Battleground 2k22 series improved the Cougars to 9-0 in the arena near downtown Fort Worth, where they have won AAC tournament titles each of the past two years.

“I don't dwell on it,” Sampson said about the ranking. “We'll have it till we lose, and we'll lose. We're not running around here pushing our chest out, thinking we're something we're not.”

Saint Mary's whittled a 12-point deficit to a single possession when Mahaney hit a 3, and he made it a three-point game again at 46-43 with another from long range.

Roberts answered by backing down for a short jump hook before Sasser converted a three-point play to put the Cougars up 51-43.

Houston broke a 17-all tie with a 14-3 run to finish the first half, with Saint Mary's going 1 of 11 from the field in that stretch against the vaunted Cougars defense, which is the toughest in the nation on scoring and shooting.

“I went into the game, I was like, 'I don’t know how in the heck we're going to score,'” Gaels coach Randy Bennett said. “You could give yourself no chance if you just let them just get easy baskets. We did a good job there. But we couldn't score at a percentage we needed to to beat them.”

Saint Mary's: Facing the No. 1 team isn't foreign to the Gaels, who play in the West Coast Conference with Gonzaga. St. Mary's is 2-7 against the Zags when they have the top ranking, with the victories coming in two of the past three seasons.

Houston: The Cougars had no trouble in their debut with the No. 1 ranking, blowing out Norfolk State 100-52 at home Tuesday. A disciplined and tournament-tested opponent for the second game was just the threat Sampson's club figured it could be.