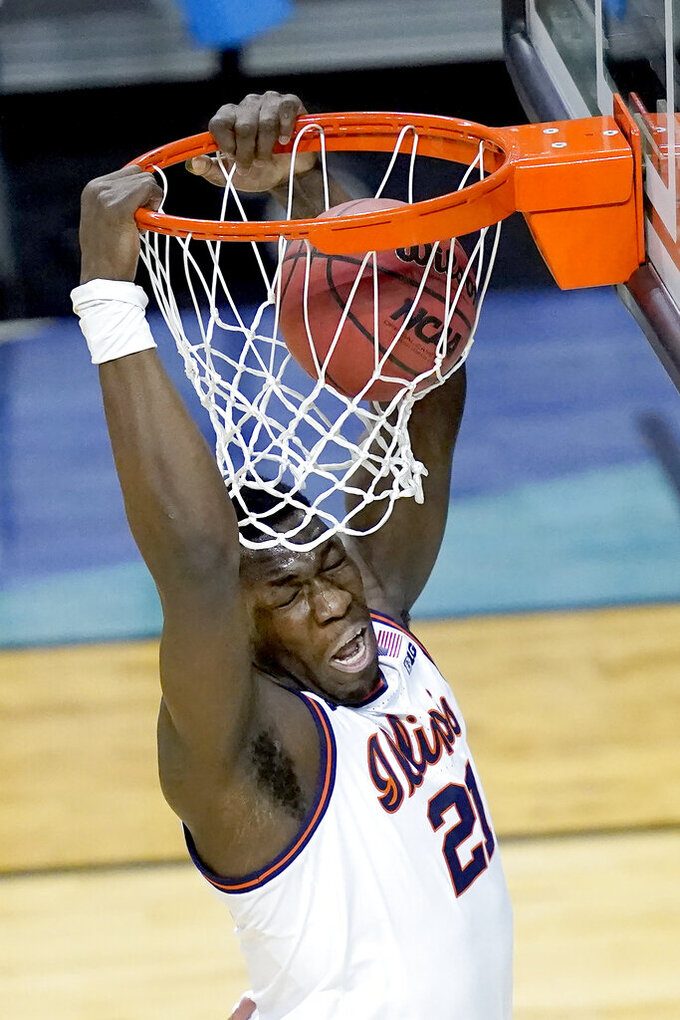 Illinois center Kofi Cockburn dunks the ball during the first half of a first round NCAA college basketball tournament game against Drexel Friday, March 19, 2021, at the Indiana Farmers Coliseum in Indianapolis .(AP Photo/Charles Rex Arbogast) 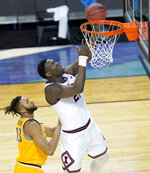 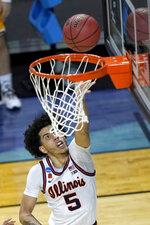 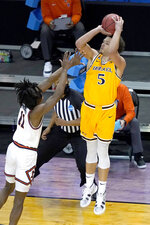 INDIANAPOLIS (AP) — Kofi Cockburn muscled his way to 18 points and Illinois cruised past 16th-seeded Drexel 78-49 Friday in the Illini's first NCAA Tournament game as a No. 1 seed in 16 years.

Illinois (23-6) will face eighth-seeded Loyola Chicago in the second round of the Midwest Regional on Sunday.

Maybe that will be more of a test for the Big Ten champions. Drexel (12-8) never really had chance at containing the 7-foot, 285-pound Cockburn, who was 8 for 11 from the field.

“I thought it was a matter-of-fact game,” Illinois coach Brad Underwood said.

The Illini are back in the NCAAs for the first time since 2013 with a team full of first-timers to March Madness after the pandemic canceled last year's tournament.

“It was a really good experience, especially for me,” Cockburn said. “It was just about enjoying the moment."

James Butler — 6-8 and 242 pounds — drew the daunting task of trying to handle Cockburn, without much success. The senior did have 10 points and 10 rebounds for Drexel.

The Dragons closed the season with four straight victories, including three during a surprising run through the Colonial Athletic Association Tournament, to earn a bid to the NCAAs for the first time since 1996. They managed to stay competitive for about seven minutes, taking an 8-7 lead.

Indiana Farmers Coliseum, home of IUPUI of the Horizon League and a minor league hockey team, hosted the Midwest Region games Friday. The 82-year-old building that was the site of the Beatles' only concert in Indiana normally holds about 6,800 for basketball, but capacity was capped at 1,200 for its first NCAA games because of COVID-19 restrictions.

Illini fans, excited to see the their team as a top seed for the first time since a Final Four run in 2005, seemed to get their hands on most of the tickets. They dotted the stands with blue and orange and cranked up an “I-L-L” chant late in the game.

It took their team a few minutes to find a groove.

“I thought we played with a bit of nervous energy early,” Underwood said.

All-American Ayo Dosunmu didn't score his first points until he swooped in for a layup with 6:19 left in the first half.

Cockburn got loose for 10 straight Illinois points in the first half, capping his personal run with a slam off a flip from Dosunmu.

“It’s not just his size,” Drexel coach Zach Spiker said of Cockburn. “It’s his ability to score in different ways.”

“Even if the offense doesn't work for us for a couple of minutes like it didn't, we still kept ourselves in the game with our defense,” Cockburn said.

The lead got to 20 points after a minute in the second half and never dipped below that the rest of the way.

Drexel: The Dragons had to finish with a flourish to shoot 31% for the game. They were held to 22% in the first half. There just weren't many good looks against the longer and quicker Illini.

“I thought the quality of our shots were not as good as they have been throughout the season and the credit goes to Illinois for doing that,” Spiker said.

Illinois: Maybe the best news for the Illini: Coming off a tough Big Ten Tournament that ended with an overtime win on Sunday, nobody had to play more than 32 minutes.

The Illini are 12-3 all-time against in-state rival Loyola, last playing the Ramblers in 2011.