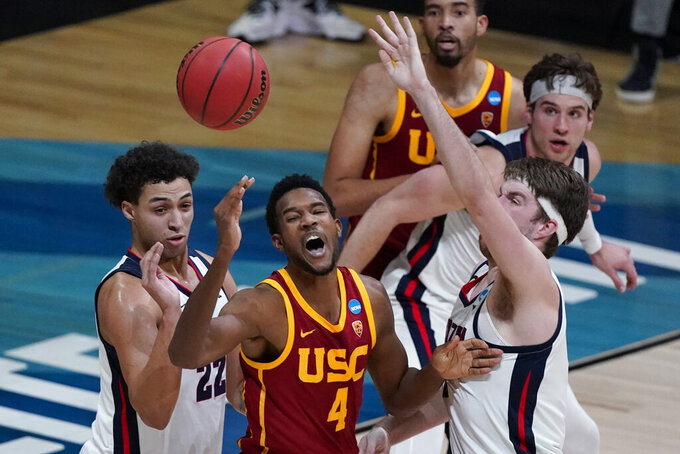 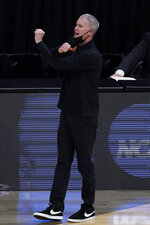 Southern California knew it might take a perfect game to spoil Gonzaga's perfect season and reach the Final Four.

Less than 20 seconds in, perfect was long gone.

The turnovers came quickly. So too did a big deficit. And just like that, the Trojans' chances of beating the NCAA Tournament's No. 1 overall seed were all but over.

By the end, Gonzaga had claimed an 85-66 win in Tuesday's West Region championship game, a margin that was largely established during a mistake-filled opening 12 minutes for the Trojans.

“We didn’t do our part offensively,” USC coach Andy Enfield said. "It was a little unusual because we had been playing so well offensively. We haven’t been turning the ball over, we’ve been making shots and playing together as a team.

“I thought we got sped up a little bit at times in the first half because we were trying too hard after our slow start.”

Sixth-seeded USC (25-8) committed seven of its 10 turnovers in a rough opening 11-plus minutes, a stretch that helped Gonzaga run its lead out to a 17-point margin. That put the Trojans in the near-impossible position of trying to make up ground against the nation's highest-scoring offense.

It was a frustrating finish to the Trojans' first trip to a regional final since losing to eventual champion Duke in 2001. They were chasing the program's first Final Four since 1954 and third overall.

The Trojans rolled through the first three games of the tournament, beating Drake, Kansas and Oregon by double-figure margins — highlighted by an 85-51 win against the Jayhawks to reach the Sweet 16. They had found added confidence by using plenty of zone looks along the way after playing man most of the season, allowing opponents to shoot just 32% in the three NCAA wins.

That unit faced a big test slowing a Gonzaga offense averaging 91.8 points — and that was before the Trojans started committing turnovers to send the Bulldogs off and running.

It started with Gonzaga's Drew Timme stripping Tahj Eaddy just 18 seconds into the game, starting a transition that led to a foul as the Zags jumped to a 7-0 lead that had Enfield burning a quick timeout.

But the mistakes continued.

Enfield said the Zags were switching on defense and trying to deny passes, though he said the Trojans had seen that in their previous tournament games.

“They were denying the wings a lot,” freshman big man Evan Mobley said. “A lot of our plays involve a lot of movement and swinging the ball. But we couldn’t swing the ball because our wings weren’t open necessarily. So it would cause the guard to go 1-on-1 or so, and sometimes it would cause a turnover.”

That showed on one turnover from USC's Max Agbonkpolo, who tried to drive on Corey Kispert only to see Timme come over to strip the ball. Timme took it all the way for a layup and a 17-4 lead.

By the time Andrew Nembhard had a layup off yet another turnover, Gonzaga led 29-12 while USC had six turnovers with just five made baskets.

USC got no closer than 13 again, even after committing just three turnovers in the second half.

As Enfield said, by then it was way too late.

“We did settle down and the last 30 minutes of the game was pretty even,” Enfield said. “But it was just the first 10 or 12 minutes, we got in a deep hole.”