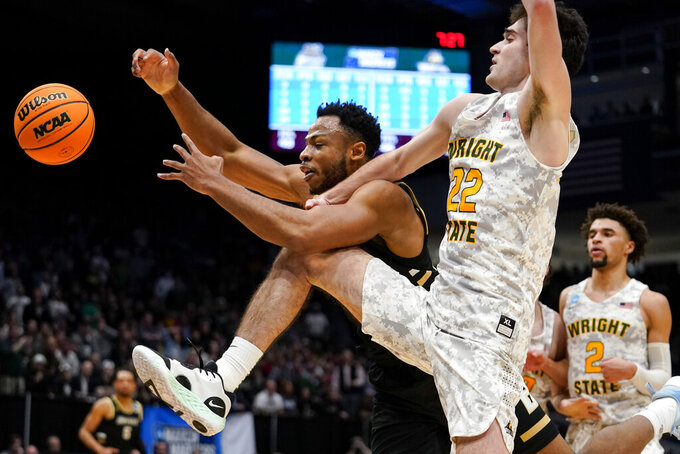 Playing inside the University of Dayton Arena just 12 miles from its home court, Wright State (22-13) advanced to play top-seeded Arizona in San Diego on Friday in the West Region.

“It was a frantic-paced game,” Wright State coach Scott Nagy said. “We haven’t had many teams this year come at us like that just after every make and miss and turnover.”

The Raiders led 44-42 at halftime behind 20 points from Holden.

Both teams were seeded 16th.

Wright State guard Tim Finke drew the assignment of guarding Kiss. Finke forced Kiss to make four turnovers and shoot below his season average of 45.6% from the field.

“Tim’s a fantastic defender. We’ve known that all year,” Basile said. “He made him work for it.”

Holden made a season-high 14 free throws, including a perfect 8-for-8 clip in the first half. He finished just one point shy of tying his career high.

“I think it was definitely a good booster for us,” Holden said. “Emotionally, I thought the crowd did a great job being energetic and getting into it. It’s awesome to be able to do this, like Grant said, in your backyard.”

Located east of Dayton, Wright State made its fourth NCAA Tournament appearance. The Raiders won the Horizon League Tournament in 2018 but lost to No. 3 Tennessee in the first round.

After navigating off-the-court adversity in which five players were impacted by the deaths of a parent or grandparent, Wright State etched program history while banding behind the mantra, “Brotherhood over Basketball.”

Wright State: The Raiders had 44 rebounds, their second-most of the season. They have 13 offensive rebounds.

Wright State: Vs. No. 1 Arizona on Friday in San Diego.

“I think we’re all confident and we’re going there to win,” Holden said. “We’re not just going there for the experience of March Madness.”