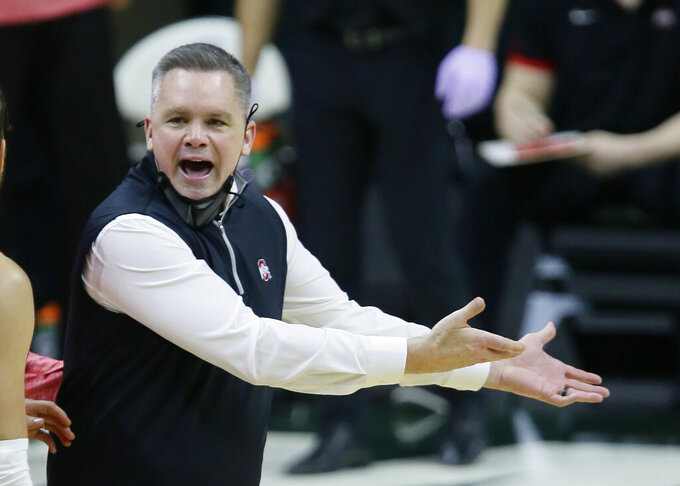 Ohio State head coach Chris Holtmann continues to argue after being whistled for a technical foul during the second half of an NCAA college basketball game against Michigan State Thursday, Feb. 25, 2021, in East Lansing, Mich. (AP Photo/Duane Burleson) 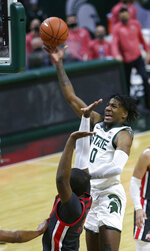 EAST LANSING, Mich. (AP) — Tom Izzo walked into the locker room with fists in the air and an ear-to-ear grin on his face, welcoming water getting doused on him by Michigan State's players celebrating what clearly was not just another win.

Aaron Henry had 18 points to help the Spartans improve their chances of making the NCAA Tournament with a 71-67 win over No. 4 Ohio State on Thursday night, two days after Izzo's team beat No. 5 Illinois by nine points.

The Hall of Fame coach led Michigan State to the national championship in 2000, early in a string of 22 straight NCAA Tournaments that includes eight trips to the Final Four.

This year, though, it looked as if the Spartans (13-9, 7-9 Big Ten) would not make their usual appearance in the NCAA Tournament until their recent surge with three straight wins.

And that's why Izzo had no problem with the postgame celebration.

“There would’ve been days I would’ve chewed them out for that," he said.

The Spartans rallied from a nine-point, second-half deficit against Ohio State with Gabe Brown finishing with 11 points and Josh Langford making key plays at both ends of the court.

The Buckeyes (18-6, 12-6) closed the game without coach Chris Holtmann, who was ejected for arguing with officials when he was called for a second technical foul with 1.4 seconds left.

“I’m not going to talk specifically about the officiating," Holtmann said.

“We had trouble finishing around the baskets," Holtmann said.

The Buckeyes went ahead 49-40 midway through the second half, but Henry and Langford would not let them pull away as Michigan State outscored them 15-6 to pull into a 55-all tie with 6:42 left.

Malik Hall made free throws to put the Spartans ahead 64-63 with 2:23 to go. Henry followed with a jumper to give them a three-point lead with 1:08 remaining.

That gave the Buckeyes the ball with 12.8 seconds left and a chance to tie or win the game in regulation. Washington came up short, defended by Langford, on a layup with about five seconds left to trigger Holtmann's second technical.

“Give Michigan State credit," Holtmann said. “They were more physical."

Michigan State was coming off an 81-72 win over No. 5 Illinois at home on Tuesday and started strong against the Buckeyes, leading 11-6 a few minutes into the game. Henry went to the bench with 6:45 left in the first half after getting called for a second foul and scoring nine points, leading to the Buckeyes leading 38-33 at halftime.

Ohio State: Despite losing at Michigan State after a 92-87 setback to Michigan, earning top seeding in the NCAA Tournament is still within reach for the Buckeyes.

“They’re still a 1 seed in my mind," Izzo said. “In our conference, there are so many good teams and you never get a night off."

Michigan State: As much as the once-reeling team has bounced back, it likely has to close the season strong and avoid a flop in the Big Ten Tournament to earn a postseason bid.

“We have to continue to be hungry," Henry said.

Ohio State: Senior forward Kyle Young, who averages 8.7 points, 5.7 rebounds and has started 22 games, was out for the game because of a concussion after bumping heads with a Michigan player in Sunday’s loss.

“He’s kind of like our glue guy," Walker said.

Michigan State: Point guard Foster Loyer was on the bench, but not in uniform, resting his injured left shoulder for a third game in a row.

The Buckeyes have a chance to hold their lofty position in the Top 25 with another opportunity to earn a quality win at home game against No. 9 Iowa on Sunday.

Ohio State: Host the Hawkeyes on Sunday, three days after their 79-57 loss at No. 3 Michigan.

Michigan State: Play at Maryland on Sunday, a third game in six days against a team that has been resting and practicing since beating Rutgers on Feb. 21.