No. 1 Louisville gets a huge test against No. 4 Michigan 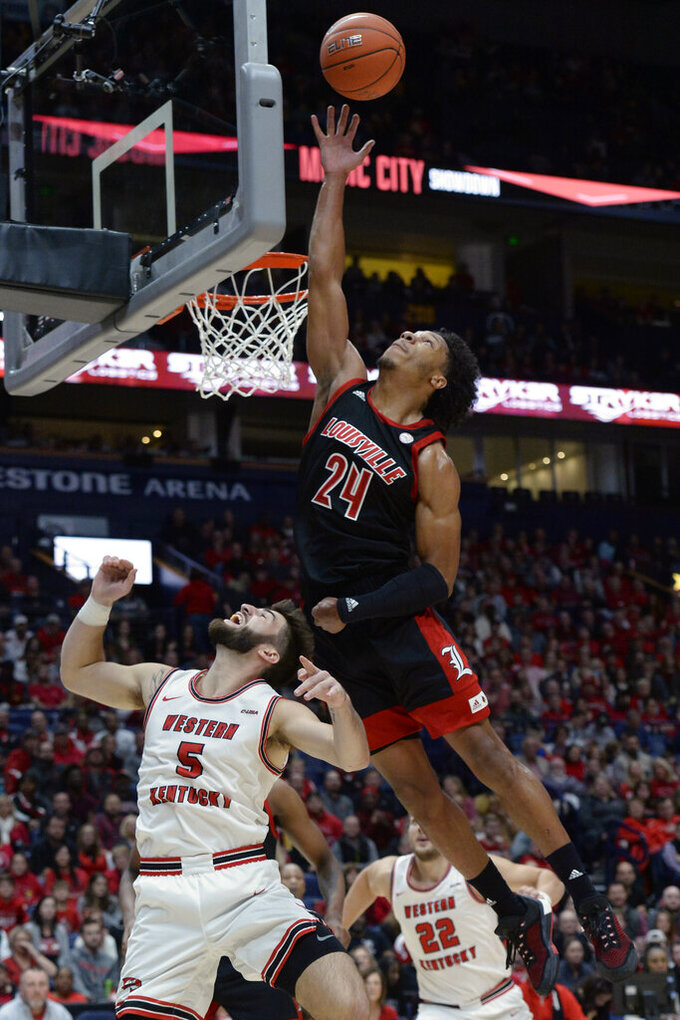 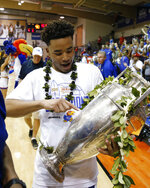 Louisville moved to No. 1 and Michigan had a historic climb to No. 4 in another wild week in The Associated Press Top 25.

On Tuesday, the Wolverines play on the road against the Cardinals, who moved to No. 1 this week for the first time in six years.

Next Monday’s poll could see a fifth No. 1 in six weeks with a Louisville loss or Michigan slide back down the rankings if it loses.

"Win or lose tomorrow night, it’ll have nothing to do with the ranking,” Louisville coach Chris Mack said. “Michigan’s a terrific team. I want to see where our team’s at and whatever happens, try to get better."

Louisville was the preseason No. 5 and moved up to No. 2 two weeks ago. The Cardinals (7-0) took care of their business last week, beating Akron and Western Kentucky.

They moved to No. 1 for the first time since 2013 — on their way to a national championship — after previous No. 1 Duke had its 150-game home nonconference winning streak ended on a last-second shot by Stephen F. Austin.

The climb puts Louisville in a precarious spot.

“We definitely would like to say that we earned No. 1 in the nation, but we aren’t relaxed,” Louisville freshman point guard Fresh Kimble told reporters in Louisville. “We’re going to keep going."

Michigan has been unstoppable so far in its first season under former Wolverines star Juwan Howard.

Picked to finish fifth in the Big 10 media preseason poll, the Wolverines (7-0) picked up a solid early-season win over Creighton and rolled over three other opponents.

Michigan started to make some noise by beating Iowa State in its opening game at the Battle 4 Atlantis in the Bahamas. Next came a win over No. 7 North Carolina, then the capper, an 84-67 win over No. 9 Gonzaga to win the title.

The three-game Bahamas run earned the Wolverines nine first-place votes in this week’s poll and a place in history. By climbing to No. 4, Michigan matched Kansas in 1989 for the highest ranking by an unranked the week before in the 70-year history of the AP poll.

Now they have to play against the No. 1 team, on the road.

“We’re playing in a tough environment,” Howard said. “We’re going into the lion’s den, I would say. They play extremely well at home. This is going to be our first time being road tested in non-conference play. I’m looking forward to the challenge and I know our players are, too.”

The three-day ACC/Big Ten Challenge has some marquee games, starting with No. 10 Duke at No. 11 Michigan State on Tuesday.

The Blue Devils (7-1) dropped nine spots in this week’s poll after losing to Stephen F. Austin and struggling to put away Winthrop at home.

The Spartans (5-2) labored in the Maui Invitational opener as All-American point guard Cassius Winston continues to struggle with his brother’s death, but bounced back to win its final two games and take fifth.

On Wednesday, No. 6 Ohio State (7-0) gets a huge test to its perfect start to the season, playing at No. 7 North Carolina.

The Tar Heels then turn around and face No. 7 Virginia on Sunday. That’s one tough week.

A huge game between teams on the opposite side of the state will take place Saturday in Washington.

No. 8 Gonzaga, coming off the lopsided loss to Michigan in the Bahamas, heads west to play No. 22 Washington in what figures to be a high-level game.

The Big 12 and Pac-12 will have two big games on Saturday.

No. 5 Kansas gets no letup in the schedule after winning the Maui Invitational, facing No. 20 Colorado at Allen Fieldhouse.

No. 12 Arizona has another huge test following its Wooden Legacy championship, playing at No. 18 Baylor.