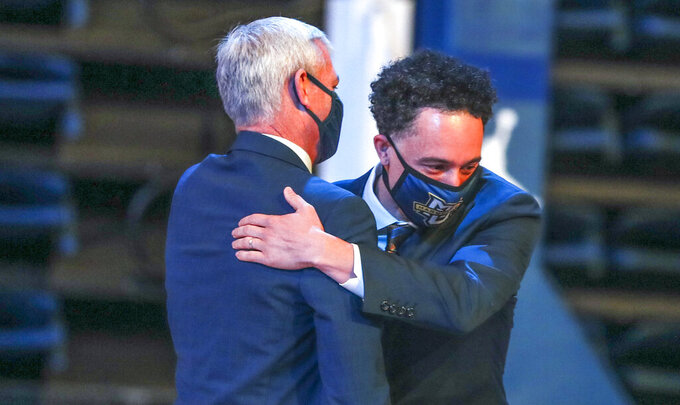 MILWAUKEE (AP) — Shaka Smart acknowledges he’s happy to return to his home state but says that isn’t necessarily the reason he decided to leave Texas for Marquette.

“I grew up about an hour from here,” Smart said Monday at his introductory news conference, three days after taking the Marquette job. “I was born in Madison, I spent my whole childhood in Wisconsin. It’s phenomenal being back. But the reason I came back is Marquette. That’s why I’m here.”

Smart, who turns 44 on April 8, said he welcomed the opportunity to coach at a school where basketball was the main sport. He cited Marquette’s family atmosphere and the shared vision among the school’s hierarchy as other factors in his decision.

Marquette is hoping Smart can recreate his success at VCU and get the Golden Eagles back to their level of play from several years ago, when they were regularly advancing to the second week of the NCAA Tournament.

Marquette pursued Smart in 2014 — three years after that Final Four run — but he stayed at VCU. The Golden Eagles instead hired longtime Duke assistant Steve Wojciechowski, who was fired March 19 after going 128-95 with no NCAA Tournament victories in seven seasons.

At that point, Smart was one of the brightest coaching prospects around. But he didn’t win a single NCAA Tournament game at Texas.

Smart was 109-86 with three NCAA appearances in six years at Texas, and the Longhorns would have earned a bid last year if the pandemic hadn’t shut down the season.

Texas went 19-8 and won the Big 12 Tournament this season to earn a No. 3 seed, but Abilene Christian upset the Longhorns 53-52 in the first round.

That turned up the pressure on Smart, who had two seasons left on a contract paying him more than $3 million per year.

“I’m so grateful for all coach Smart did for Texas basketball, our university community and our athletics department,” Texas athletic director Chris Del Conte said in a statement released over the weekend. “I’ve enjoyed our time together really appreciate the passion he has for his team and student-athletes, and I learned a great deal from him during our many conversations.”

Smart’s Wisconsin background was evident as he discussed his new job Monday.

He earned a round of applause from fans attending his news conference when he noted he was born in 1977, the year Marquette won its lone NCAA championship. He discussed his childhood memories watching games that featured former Marquette coach Al McGuire on the broadcast crew.

“Growing up in this part of the country, you couldn’t help but follow this basketball program,” Smart said.

Smart called Philadelphia 76ers coach and former Marquette guard Doc Rivers one of his mentors. He recalled working at Texas and VCU with Denny Kuiper, who was a consultant on Marquette’s 2003 Final Four team.

His challenge is getting Marquette back to national relevance.

Marquette went 13-14 this season and made two NCAA Tournament appearances in Wojciechowski’s seven-year tenure, though the Golden Eagles likely would have earned a bid last year if not for the pandemic.

But the Golden Eagles aren’t far removed from much greater success.

Smart said his short-term goal was establishing the right culture.

“It’s not a commentary of anything that happened before,” Smart said. “I think anytime a new coach comes in, you have to build a culture you believe.”

His long-term hopes are more ambitious.

“You want to have seasons where you put something up in the rafters, whether it’s a Big East regular-season championship, a Big East Tournament championship,” Smart said. “The ultimate goal is to advance to the Final Four or beyond.”