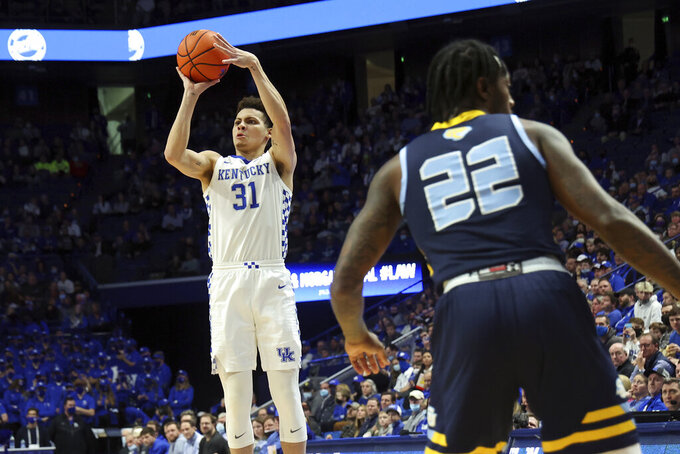 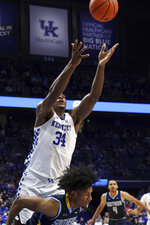 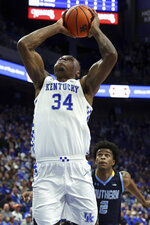 LEXINGTON, Ky. (AP) — Oscar Tshiebwe wasn’t fazed by being a foul away from having to leave the game, because he was playing smarter.

“I wanted my head to stay in the game,” said Tshiebwe, who finished with four fouls and sat for several minutes in the first half. “Coming back, I was kind of with the mentality of win the game and be careful. Coach told me that if you see you cannot get it, don’t reach, just go back.”

Tshiebwe scored 18 of his 23 points after halftime despite that foul trouble, TyTy Washington Jr. added 14 points and both Wildcats keyed small runs to help No. 10 Kentucky top Southern 76-64 on Tuesday night for its seventh consecutive victory.

Playing for the first time in eight days, the Wildcats (7-1) went back and forth with the determined Jaguars (3-6) for much of the first half before taking the lead for good at 29-26 on Kellan Grady’s 3-pointer. It sparked an 8-0 run to put Kentucky up 38-34 at the break.

Tshiebwe sat for the final 9 minutes of the first half with two fouls, but came back on the floor in the second half to lend six points and four rebounds to Kentucky’s 13-5 run for a 51-39 cushion.

The Wildcats needed it, as Southern closed to 57-51 before Tshiebwe and Washington combined for nine points to make it 66-53. Kentucky stayed ahead just enough the rest of the way to close out the team's closest victory this season after a run of blowouts.

Tshiebwe made his final seven shots to finish 9 of 11 from the field and grabbed 11 rebounds for his nation-leading seventh double-double. Grady and Davion Mintz each added nine points as the Wildcats shot 49% and won the contest on the boards 41-25 and the paint 23-11.

There were also some blemishes for Kentucky, which committed 15 turnovers that led to 21 Southern points. The Wildcats were also outscored 13-8 on the break, speaking volumes to the Jaguars' intensity.

“Thank goodness we won, because they played harder than us," Kentucky coach John Calipari said. “(Southern coach) Sean (Woods) did a better job of coaching this team. ... They never stop playing no matter what the score was, just like today."

It also marked another homecoming for Woods, who is Kentucky’s career leader in assists per game and No. 5 in steals per game and a key member of the 1992 “Unforgettables” squad that fell to Duke 104-103 in overtime in the epic 1992 NCAA tournament game decided by Christian Laettner's last-second jumper.

Woods brought his third program back to Rupp Arena, but Southern came up just short.

“We had to sustain runs and I thought we did a good job there until about seven minutes to go,” he said. "They made that one run and we couldn’t make a shot for about four or five possessions.”

Southern: The Jaguars’ fast, physical game and 3-point capability allowed them to lead several times in the first half and keep things interesting. They just couldn’t string together enough baskets to keep pace with Kentucky or prevent Tshiebwe from taking charge in the second half.

Kentucky: Some rust was expected, and initially showed up in the Wildcats’ slow shooting start. Baskets eventually started falling and it helped to have Davion Mintz back from a three-game absence because of illness. He contributed a couple of 3s in the first half, and every bucket was needed to keep Southern at arm’s length.