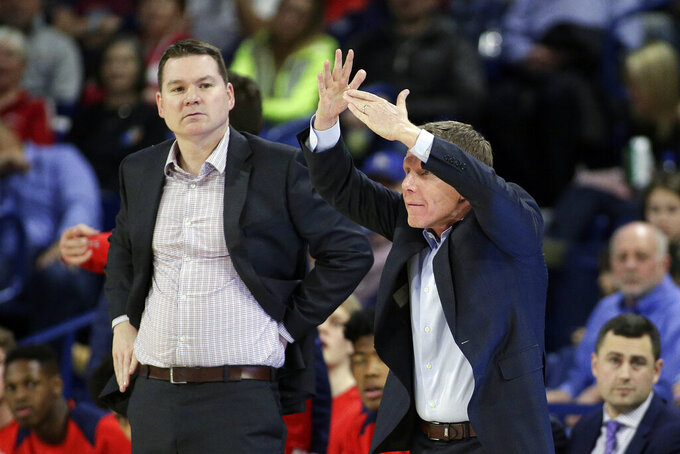 FILE - In this Thursday, Feb. 1, 2018 file photo, Gonzaga head coach Mark Few, right, calls a timeout as assistant coach Tommy Lloyd looks on during the second half of an NCAA college basketball game against San Diego in Spokane, Wash. Arizona has hired longtime Gonzaga assistant Tommy Lloyd as its next men’s basketball coach, Wednesday, April 14, 2021. The school says Lloyd will receive a five-year contract, pending approval by the Arizona Board of Regents. (AP Photo/Young Kwak, File)

The school said Wednesday that Lloyd will receive a five-year contract, pending approval by the Arizona Board of Regents.

Lloyd replaces Sean Miller, who was fired after 12 years on April 7 amid an NCAA infractions investigation.

“After speaking with a tremendous pool of candidates and with so many in and out of the college basketball world, it became clear that Tommy has the passion, the experience, the knowledge, the coaching and recruiting acumen and the drive to lead us to championships," Arizona athletic director Dave Heeke said in a statement.

“He has been a big part of the incredible rise and success of Gonzaga basketball and is well-respected for his partnership with that program’s head coach, Mark Few. We are looking forward to what’s next.”

The 46-year-old Lloyd spent the past 20 years as an assistant to Few, helping turn Gonzaga into a national powerhouse. The Bulldogs have played for the national championship in two of the past four NCAA Tournaments and have reached the Sweet 16 in six straight seasons.

Lloyd was Few's right-hand man during the run and has proven to be an adept recruiter, particularly overseas. Behind Lloyd's efforts, Gonzaga has landed some of the top international recruits in recent years, including Rui Hachimura, Domantas Sabonis, Kelly Olynyk, Ronny Turiaf, Kevin Pangos and Killian Tillie.

“I am extremely grateful to President (Robert) Robbins and Dave Heeke for the incredible opportunity to lead one of the country’s most storied men’s basketball programs,” Lloyd said in a statement. “While there are certainly potential obstacles ahead for our program, I embrace the challenge as we will build on the foundation in place to compete for Pac-12 and national championships. I know how much Arizona basketball means to the institution, its fans, its community and the state, and I cannot wait to get started."

Lloyd takes over a program facing an uncertain future.

Arizona has been in the NCAA's crosshairs since a 2017 FBI investigation into shady recruiting practices led to the arrest of 10 people, including former Wildcats assistant Emanuel Richardson.

Arizona was hit with nine allegations of misconduct in a Notice of Allegations issued last year, including five Level 1 violations. The case is currently going through the Independent Accountability Resolution Process.

Arizona had three players enter the transfer portal after last season, including junior guard Jemarl Baker Jr., and junior guard James Akinjo is testing the NBA waters. At least one recruit from Arizona's 2021 class has opted to reopen his recruitment since Miller was fired.