Kenny Payne ready for many challenges as Louisville coach 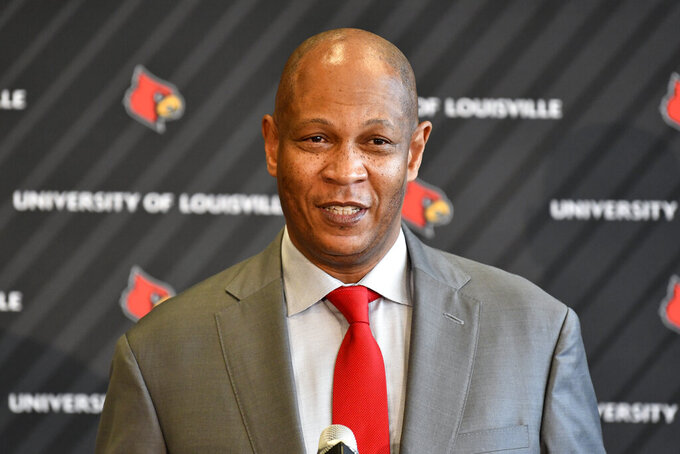 Kenny Payne made clear he will need help as he begins a huge mission with his first head coaching job at Louisville.

Payne was introduced Friday as the Cardinals' men’s basketball coach and received a six-year contract through 2027-28 to lead the program. The University of Louisville Athletic Association approved the contract on Friday morning. Financial terms were not immediately available.

Payne, a former Cardinal player, was among familiar faces at a crowded news conference at the KFC Yum! Center that included Hall of Fame coach Denny Crum and several former teammates that he called his “brothers”.

Flanked by his family, including son Zan, a Kentucky player, Payne asked those in attendance to stand and emphasized he will seek their input.

Payne, 55, is Louisville’s first Black head coach and returns to his alma mater after nearly two seasons as an assistant with the NBA's New York Knicks. He also spent 10 seasons on John Calipari’s staff at rival Kentucky and another five at Oregon.

The school conducted a national search through an outside firm and interim athletic director Josh Heird said he talked with a number of coaches, who emphasized that Payne was the one the school needed. The AD added in a news conference: “What surprised me was the support outside the community was even greater.”

As a player, Payne scored 1,089 points from 1985-89 under Crum. He was a freshman reserve on the Cardinals’ 1986 national championship squad.

Payne’s immediate priority is leading the program back from a 13-19 finish. He'll also have to deal with possible NCAA penalties resulting from a 2017 federal corruption investigation of college basketball. Louisville awaits an outcome from The Independent Accountability Resolution Process (IARP) over NCAA allegations against the program. IARP was created out of proposals from the commission led by former U.S. Secretary of State Condoleezza Rice in 2018 to reform college basketball.

Payne said he grasped the magnitude of what could happen and asked Heird about it during the interview process.

“To accept the job at the University of Louisville, it took a lot to get to this point," he said. “I say, give me the worst-case scenario. Don’t give it your best (case). I know what the best is. Give me the worst. I understand what that means."

Payne added that he talked with numerous people, including Calipari, about taking the high-profile job considered to be one of the best in the nation. All the responses were positive — that he was capable of handling it.

Calipari said Wednesday that Louisville couldn't hire anyone capable of doing a better job than Payne and added, “I may say he should have been hired before there, but you know what, they get him, they got the best of the best.”

Congratulations soon followed upon word of Payne's hiring, including an early-morning text from University of Kentucky President Eli Capilouto. Even though it will now put Payne on the opposite end of the sideline from Kentucky when the Bluegrass rivalry resumes next season, both schools understand the importance of him being there.