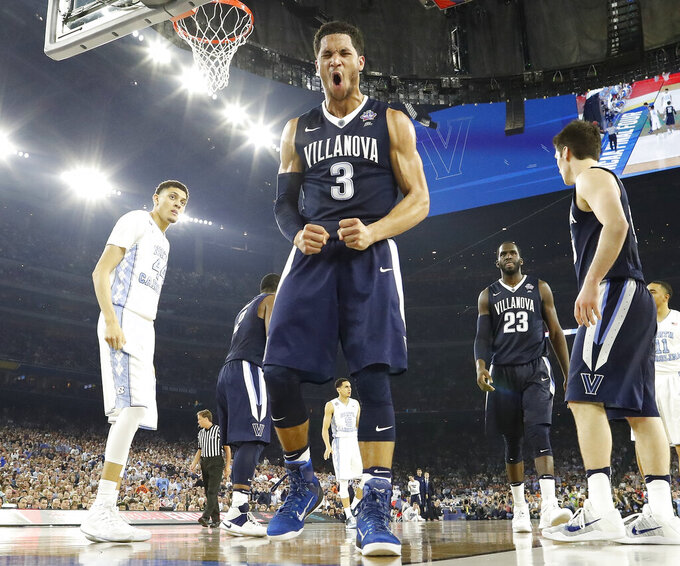 FILE - In this Monday, April 4, 2016, file photo, Villanova guard Josh Hart (3) reacts to play against North Carolina during the second half of the NCAA Final Four tournament college basketball championship game in Houston. The NCAA and networks across the sports dial have infused fans with a hoops fix by rebroadcasting epic NCAA Tournament games. Coaches and players involved in those games are adding insight and a dash of humor by live tweeting during the replay. (AP Photo/David J. Phillip, File) 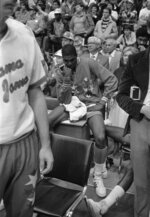 Kansas had kept Derrick Rose in check well into the 2008 national championship game when coach Bill Self decided it was time to change defenses against the Memphis star.

“Well. They have momentum. I made mistake,” Self said while live tweeting a replay of the game recently. “Had done a good job on Derrick. Then I go box and 1 a possession. He makes a 3 to get going. I’m an idiot.”

The madness is gone this March. The coronavirus pandemic wiped out the NCAA Tournament, put sports on hold, forced millions into isolation.

But the NCAA and networks across the sports dial have infused fans with a hoops fix by rebroadcasting epic NCAA Tournament games.

Coaches and players involved in those games are adding insight and a dash of humor by live tweeting the replay action, offering fans an interactive escape from the headlines on their screens.

The outcomes of these classics are already known. The joy comes from reliving the moment through the eyes of someone who was in the middle of it.

Bill Self breaking down one of the greatest title games in NCAA history play by play? That's like Vince Gilligan dissecting the “Breaking Bad” series finale scene by scene.

“Ok from this point forward watch body language of our guys,” Self tweeted. “It’s perfect. No stooped shoulders. No pointing fingers. No head hung. Total maturity. Proudest moment of a coach.”

In a time of fear and uncertainty, there's not only a need to fill a void in a world of increasing isolation, but also to distract people from the outbreak that forced them indoors in the first place.

A fifth time watching “The Sopranos” in its entirety might help. Trying to figure out the “Game of Thrones” story lines the third time through is a possibility.

But for now, at least through previously scheduled 2020 NCAA Tournament dates, sports fans can watch classic games while gleaning insight from the main characters

One example came during a replay of the 1983 national championship, still considered one of the greatest upsets in college basketball history.

Clyde Drexler, Hakeem Olajuwon and the rest of Phi Slama Jama were the juggernaut, considered to be all but a lock to beat North Carolina State in the title game. The Wolfpack managed to ground the high-flying Houston Cougars and kept it close until Lorenzo Charles grabbed Dereck Whittenburg's desperation shot and slammed it home for the winning basket, sending N.C State coach Jim Valvano scrambling across the floor to find someone to hug.

Following along with the replay was Ernie Myers, a freshman guard on the title team.

“I can remember Coach V saying we want to take the last shot no matter what. #Cardiac-Pack,” he tweeted.

The replays also add an air of much-needed levity, most of it in the form of Twitter trash talk.

Jalen Brunson trolled his Dallas Mavericks teammate Justin Jackson with a photo of his Villanova Wildcats holding up the national championship trophy after beating Jackson's North Carolina Tar Heels in the 2016 title game.

Brunson's teammates Josh Hart and Ryan Arcidiacono used the replay of that game to take potshots at each other while breaking down the game.

“Nice dig on the drive and giving up a 3...I’m just waiting for the late game turnovers,” Hart responded.

Even Self got in on the trash talking, poking fun at former guard Brandon Rush during the 2008 title game rebroadcast.

“Did Brandon just dribble with his left hand?” he tweeted.

March will not have its usual madness this year, but the replays and tweet-alongs offer a chance to relive history with a new perspective — maybe even learn something.

Matt Kleinmann was a preferred walk-on when he arrived at Kansas and appeared in 20 games during the 2008 national-title run, averaging 2.2 minutes. The 6-foot-10 center still found a way to make his mark when the confetti fell.

“My favorite #kubball story: As the game was ending, I ran on the court to celebrate early,” he tweeted during the replay. “I knew there would be photos, so I took my warmups off early, so my name and number would be shown. Because of this, got to see my name on the cover of USA Today. Didn’t play a minute.”

The replays will continue through what would have been the 2020 national championship game on April 6. College basketball fans may want to get on Twitter to follow along, maybe take some of the sadness out of March.