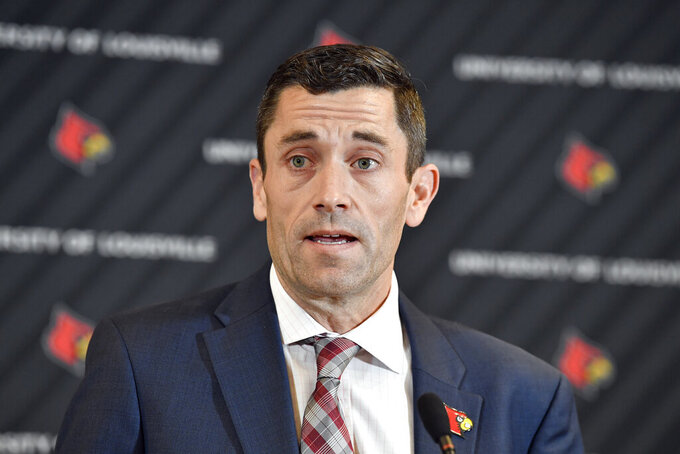 FILE - University of Louisville interim athletic director Josh Heird speaks to reporters following a meeting of the University Board of Trustees and the Louisville Athletic Association board, Wednesday, Jan. 26, 2022, in Louisville, Ky. A person with knowledge of the situation says Louisville will promote Josh Heird to athletic director after serving nearly six months as interim AD. The person spoke to The Associated Press on the condition of anonymity because the move has not been publicly announced. Louisville has scheduled a news conference Friday morning, June 3, 2022, for a “special announcement” about the athletic program following a special meeting of the University of Louisville Athletic Association's board of directors and personnel committee. (AP Photo/Timothy D. Easley, File)

The University of Louisville Athletic Association’s board of directors and personnel committee approved Heird’s promotion in a special meeting on Friday morning. He received a five-year contract through June 2027 with a proposed base annual salary of $850,000 plus incentives.

“I want everyone involved with this program to understand this is one of the best jobs in college athletics," Heird, 41, said during a news conference. "To say I’m honored and humbled to be up here would be an understatement.”

“We will dream big and we will never be OK with the status quo."

The decision follows a national search that began last month with the committee interviewing several ADs from other schools before ultimately recommending Heird. Louisville interim president Lori Stewart Gonzalez declined to mention specific candidates but said more than a dozen were interviewed and signed non-disclosure agreements (NDAs) as part of the process.

“Josh is our new director because he represents who we are today and who we aspire to be," Gonzalez added. "He has demonstrated time and again that not only is he ready to lead our program — he is ready to elevate it."

Since taking over Louisville athletics in mid-December following Vince Tyra’s resignation, the former deputy AD has overseen the departure of men’s basketball coach Chris Mack and the hiring of former Cardinals player Kenny Payne as his successor.

Many Louisville coaches supported Heird for the job including Payne, who cited his potential as a factor accepting his first head coaching job at his alma mater.

“My question to him was, do you have a chance of getting this job?," Payne said. "Hopefully you’re not going to leave me here. ... Glad he got the job, excited for him, but also excited for me and the other coaches.”

A key task awaits the 13-year athletics administration veteran later this month when Louisville defends against NCAA allegations through the Independent Accountability Resolution Process (IARP). The IARP was created out of proposals from the commission led by former U.S. Secretary of State Condoleezza Rice in 2018 to reform college basketball.

Louisville could face possible sanctions resulting from a 2017 federal corruption investigation of college basketball. The NCAA has also accused the school of additional violations committed under Mack during the 2020-21 season.

From the start, Heird believed he was capable of handling the responsibilities and felt better about his prospects after hiring the coach for Louisville's highest-profile program. He's says he's eager to achieve more now as the full-time AD.

“The biggest thing it did is it made me realize that I was given the opportunity to make the decision, to make the big decision," he said. "And I do think it prepared me for this role and got me better at some things.”