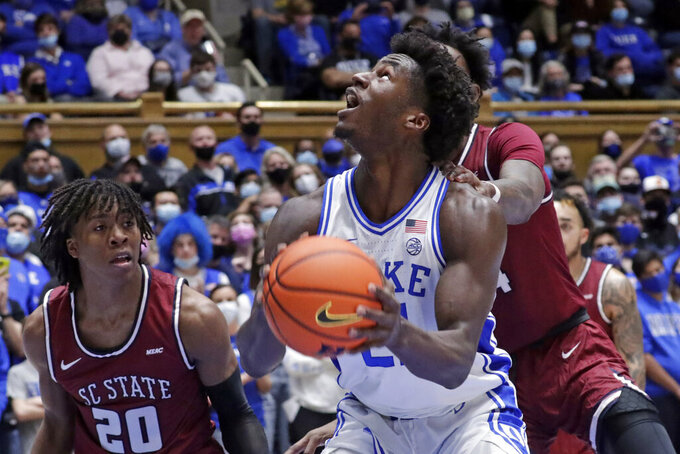 In 21 minutes of play off the bench, Griffin connected on 7 of 8 shots and tallied four rebounds and four assists. He was one of six Blue Devils to score in double digits. Trevor Keels had 14 points, Joey Baker scored 13 points, and Paolo Banchero had in 12 points, seven rebounds and six assists.

Wendell Moore Jr. scored 11 points and Mark Williams had 10 points and three blocks for Duke (8-1), which returned to the court after a two-week break for exams.

“We shot the ball really well, and shared it,” Duke coach Mike Krzyzewski said. “AJ has been coming on. These last two weeks, he’s really got in a lot of individual work. It’s just a matter of him continuing to work. ... It’s kind of neat to see.”

“I think it just naturally happens,” Griffin said of his layups. “Every single time I do that, though, I tell myself, ‘Ah. I should’ve dunked that one.’”

The game was tied at 6 before the Blue Devils embarked on a 29-8 run. Duke led by 33 points at halftime and increased its lead to as many as 47 points in the second half.

Edward Oliver-Hampton had 13 points, four rebounds and three steals to lead the Bulldogs (3-8).

“We were just outmanned. We had to play a perfect game to kind of keep it close, and we didn’t do that,” Bulldogs coach Tony Madlock said. “My guys competed. That’s all I can ask for.”

S.C. State: The Bulldogs had won two straight entering the game, but couldn’t keep up with one of the top teams in the country. S.C. State carries two upperclassmen on its roster, and its inexperience showed as the Bulldogs committed 17 fouls and 17 turnovers. The youthful squad will aim to be more competitive in Mid-Eastern Athletic Conference play.

Duke: The Blue Devils hadn't played since their loss to Ohio State on Nov. 30 but were able to shake off the rust and capture a convincing win. Duke remained sharp defensively, holding the Bulldogs to 4-of-20 shooting from 3-point range.

Duke shot 15 of 27 (55.6%) from 3-point range, its best performance of the season. Eight different Blue Devils hit at least one 3-pointer, which tied a school record.

“We got up a lot of shots the two weeks before this. We got some good shooters. Thankfully, we knocked them down. We all got open and made our shots,” said Bates Jones, who had seven points and one 3-pointer. “Good shots and great shots — a lot of it is knowing what your teammate is good at. Knowing who great shooters are. Maybe passing up a contested shot for an open shot.”

It was the second time this season Duke has scored more than 100 points.

Duke won't have any chance to overtake No. 1 Baylor unless the Bears lose.

Duke’s Theo John was sidelined with a back injury. ... Krzyzewski’s grandson, Michael Savarino, was in uniform for the first time since his DWI arrest on Nov. 14. He played four minutes and scored three points. ... Newly hired Duke football coach Mike Elko attended the game and shook hands with Krzyzewski.

S.C. State: The Bulldogs return home and will host Carver College on Thursday.