Tied in Pac-12, USC and UCLA meet with tourney implications 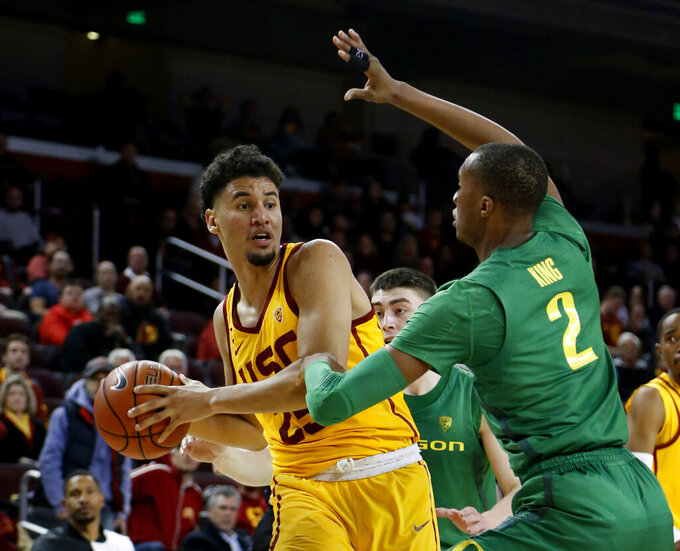 FILE - In this Feb. 21, 2019, file photo, Southern California's Bennie Boatwright (25) looks to pass the ball against Oregon's Louis King (2) during the second half of an NCAA college basketball game in Los Angeles. USC has an explosive offensive player in Boatwright, who has made 19 3-pointers in his last three games. He made 10, tying a Pac-12 record, in a win at California on Feb. 16. (AP Photo/Ringo H.W. Chiu, File)

LOS ANGELES (AP) — Jaylen Hands wouldn't change a thing in this rockiest of seasons for UCLA. Not even losses to Belmont and Liberty that contributed to the firing of coach Steve Alford.

After many starts and stops, the Bruins appear to be on the upswing behind the sophomore guard's leadership, along with sophomore Kris Wilkes and freshman Jules Bernard.

"We couldn't get to where we are right now without the downs and ups we had," Hands said. "Hopefully, we keep turning up."

Their next test comes against Southern California on Thursday.

The crosstown rivals are tied for fifth in the Pac-12 standings with identical 8-7 records. Their overall records are the same at 15-13 with two weeks remaining in the regular season.

Neither team's resume is impressive enough to get them into the NCAA Tournament, leaving the conference tournament as their only route. The top four seeds receive opening-round byes for next month's Pac-12 tourney in Las Vegas, giving the Trojans and Bruins plenty of incentive beyond bragging rights for the game at Pauley Pavilion.

"It's a big game for us because of the Pac-12 standings, trying to get that bye," Hands said.

Even a fifth-place finish for either team would mean they would face last-place California in the opening round. The Golden Bears are 0-15.

Last month, the Trojans beat the Bruins 80-67 at Galen Center in a loss that came nearly three weeks after Alford's firing that left the young team foundering.

"It's getting later in the year where I think they're starting to figure it out a little bit more," interim UCLA coach Murry Bartow said.

UCLA comes in having won two in a row and three of four.

Hands was hot for UCLA in its 19-point comeback win over Oregon last weekend. He scored all of his 27 points in the second half, including 13 in his team's 17-0 run that resulted in a 90-83 victory. The Bruins scored a season-high 62 points in the final 20 minutes.

When he returned to practice this week, Hands said, "I still noticed I was shooting great."

USC has an explosive offensive player in Bennie Boatwright, who has made 19 3-pointers in his last three games. He made 10, tying a Pac-12 record, in a win at California on Feb. 16.

Nick Rakocevic leads the league with 13 double-doubles this season and is the league's third-leading rebounder.

"Boatwright is just going off right now. Rakocevic has hurt us," Bartow said. "They've certainly got our respect."

The Trojans are 2-4 in their last six, and struggling with leadership issues that previously dogged UCLA.

The Bruins have ridden a roller coaster this season, digging double-digit holes for themselves in multiple games. Besides their 19-point deficit against Oregon last weekend, they trailed the Ducks by 17 last month and won on the road. They were down by 22 points against Utah and lost on a buzzer-beating 3-pointer at home two weeks ago.

UCLA trailed USC by 26 points in the second half on Jan. 19 before losing. Now the Bruins get a rematch on their court.

"It's going to be a lot more comfortable," said Bernard, who had a career-high 20 points against Oregon. "We were away last time. Our crowd does a lot for us. Thursday is going to be a lot of people. If we have that same energy, not only on the bench and the players, but also in the crowd, I think they could push us forward."