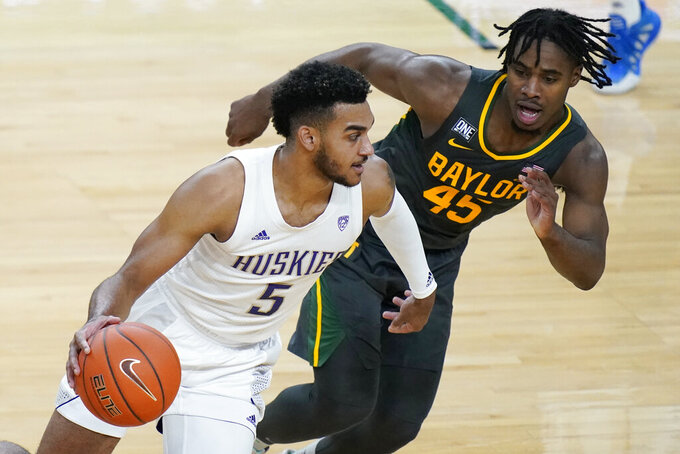 The rest, predictably, was filled with change as teams exceeded or failed to live up to preseason expectations.

Gonzaga and Baylor remained Nos. 1-2 in the poll released Monday. The Zags received 57 of 63 first-place votes from a media panel and the Bears had six first-place votes. They were the only two teams to hold their places from the preseason poll.

Gonzaga kept the top spot by a commanding margin with impressive wins in Fort Myers, Florida. The Zags (2-0) rolled over Kansas 102-90 and crushed Auburn 90-67 the next day.

Baylor was forced to drop out of the “Bubbleville” tournament in Uncasville, Connecticut, after coach Scott Drew tested positive for COVID-19. The Bears (2-0) adjusted their schedule and had no trouble playing under assistant coach Jerome Tang, routing Louisiana-Lafayette and Washington.

The two losses allowed Iowa to move up two spots to No. 3, with Wisconsin and Illinois rounding out the top five. The Illini are in the top five for the first time since reaching No. 1 in 2004-05.

Kansas dropped a spot to No. 7 after the loss to Gonzaga. The Jayhawks still managed to move atop the all-time consecutive polls list.

No. 6 Duke has the second-longest active poll streak at 85 straight weeks.

Luka Garza had a lot to do with it.

The preseason All-American kicked off his senior season with 26 points and 10 rebounds in a win over North Carolina Central, then scored 41 points on 14-of-15 shooting in a rout over Southern.

“Whenever I get the ball, I feel like I can score,” Garza said. “Sometimes you have those days where you’re just making shots. I put enough work into each shot that when I put it up, I have a strong feeling that it’s going to go in."

The Hokies may be better than expected, based on their opening week.

Virginia Tech (3-0) opened the season with an easy win over Radford, then pulled off an upset by knocking off then-No. 3 Villanova in overtime in Bubbleville. The Hokies closed out their week with an 18-point victory over South Florida after their game against Temple was canceled due to COVID-19 concerns.

Virginia and Villanova had two of the biggest drops in the opening regular-season poll, but there was plenty of other movement.

Houston climbed seven spots from No. 17 after knocking off No. 17 Texas Tech, which dropped three spots from last week.

No. 20 Kentucky fell 10 spots after losing at home to Richmond. The win was the Spiders’ first on the road against a top-10 team and helped them enter the poll at No. 19.

UCLA dropped out of the poll after losing to San Diego State and needing triple overtime to beat Pepperdine.