San Diego State lone unbeaten as No. 4 Aztecs press on 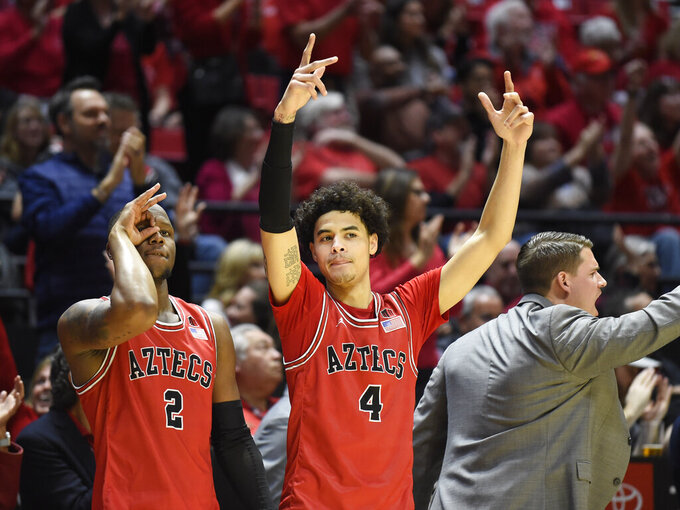 San Diego State coach Brian Dutcher knew that the fourth- and fifth-ranked teams in the Top 25 lost twice last week, but he evidently forgot that the same fate befell then-No. 3 Duke in a brutal week for the nation's top team teams.

That's why he doesn't put much stock into climbing to No. 4 in this week's poll.

“You know, they're just numbers,” said Dutcher, whose team is the lone unbeaten left after squeaking out a comeback win over Nevada last Saturday to move to 19-0, and matching the 2010-11 team for the highest ranking in school history.

“As good as you're playing,” Dutcher said, “you're only one week from a disaster in this business. A team makes shots and you lose a game, then you might drop another because you're on the road. That's just basketball. We're fortunate where we are but we're not naive enough to think if we don't prepare well it can't happen to us.”

The Aztecs shouldn't have much trouble keeping their perfect record intact Tuesday night, when they face bottom-dwelling Wyoming at Viejas Arena, where they have been especially tough to hang with this season.

“I can't imagine a team coming in here and being comfortable, playing in this noise,” Dutcher said. “They're trying to call timeout, they can't call timeout. It's just a huge home-court advantage when this building is rocking the way it is.”

The Aztecs won't have that luxury later in the week, when they face UNLV. The Runnin' Rebels got off to a poor start this season but they're 6-1 in Mountain West, putting them just 1 1/2 games behind San Diego State in the standings.

The only two teams in last week's top 5 that took care of business last week were Baylor and Gonzaga, which flip-flopped their rankings to give the AP poll a record-tying seventh No. 1. Now, the Bears (15-1) will spend the week trying to hold onto the ranking when they played Oklahoma on Monday night and Florida next weekend. The Bulldogs (20-1) have only one game this week against Pacific on Saturday night.

The Bears' showdown with the Gators (12-5) has turned into one of the marquee match-ups of the annual inter-conference clash, especially after Florida took down Ole Miss and then-No. 4 Auburn last week. The other big games feature Tennessee heading to Allen Fieldhouse to face No. 3 Kansas, and No. 15 Kentucky visiting No. 18 Texas Tech.

Indiana (14-4), which picked up a few Top 25 votes this week, could make a big statement this week to voters — and to the rest of the Big Ten. The Hoosiers have won three of their last four and take some momentum into home games against No. 11 Michigan State on Thursday and No. 17 Maryland on Sunday. Those are two of the four teams ahead of them in the league.

Two teams on the rise are No. 19 Iowa and No. 24 Rutgers, both of whom jumped into the poll this week. They'll face each other on Wednesday in Iowa City. The Hawkeyes (13-5) have beaten then-No. 12 Maryland and then-No. 19 Michigan during a three-game win streak, and the Scarlet Knights (14-4) rolled through Indiana and Minnesota last week.

Asked about being ranked for the first time since the 1978-79 season, Rutgers coach Steve Pikiell replied: “Nope, no thoughts. We were picked 12th in the league and that's where we were picked.”

Seventh-ranked Dayton (16-2) climbed six more spots this week, but the Flyers have a pair of deceptively tough Atlantic-10 games this week. The Flyers begin Wednesday night by facing St. Bonaventure, a team that has won four of its last five, and then face Richmond — a team just a game back of Dayton and Duquesne in the conference standings.

There are three ranked teams in the Pac-12 in No. 12 Oregon, No. 22 Arizona and No. 23 Colorado, but the hottest team in the league might be Southern California. The Trojans (15-3) have won three straight and nine of their last 10 as they prepare to visit the Ducks on Wednesday night. They return home to face Oregon State two days later.