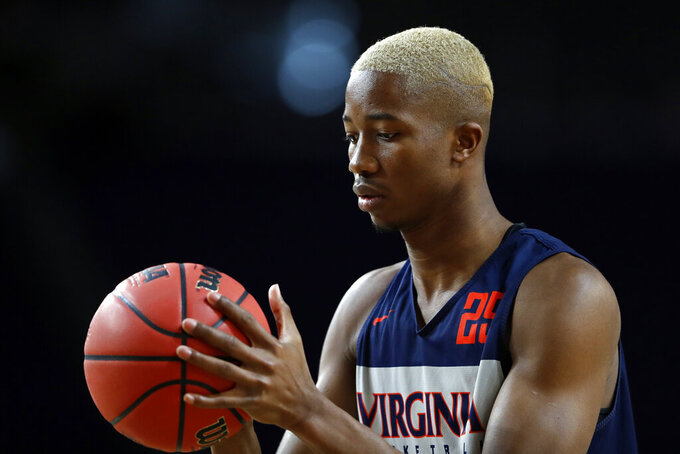 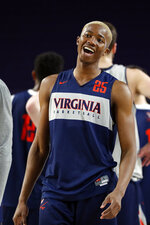 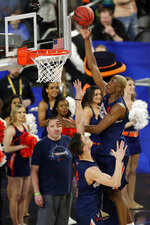 CONAKRY, Guinea (AP) — There were a few things Virginia forward Mamadi Diakite had to do to have a shot in the world of basketball.

He had to listen to his dad. He had to stop kicking a ball around in his hometown of Conakry in the West African country of Guinea.

And after giving up soccer for a completely unfamiliar game, he had to watch old video tapes of Michael Jordan and Hakeem Olajuwon to see what the heck basketball was all about.

That's pretty much how Diakite started on the road from Africa to the University of Virginia and now the Final Four thanks to his game-tying buzzer-beater to force overtime in Virginia's Elite Eight win over Purdue.

As Diakite recalled during the Final Four buildup in Minneapolis, it wasn't instant success when he made the switch in sports back in Conakry, the capital of Guinea.

"I didn't know anything about NBA," Diakite said Thursday at U.S. Bank Stadium, where Virginia next faces Auburn on Saturday. "So I started playing and my teammates were kicking my butt a lot. So I didn't know what was going on.

"I had to watch tapes ... I had to watch Michael Jordan and all those guys for six or seven months, and once I got the hang of it, I started watching Hakeem Olajuwon."

While Diakite's father spotted a little basketball potential in his tall, slender child, something else prompted the change — soccer's reputation for fighting in Guinea.

"I often sat to watch my son play football (soccer)," Diakite's father, Aboubacar Sidiki Diakite, said in French in an interview with The Associated Press in Conakry. "He played excellently well but I was worried.

"Football is a violent sport. That's why I told him one day, 'Mamadi, are you interested in basketball?' And he answered, 'No problem, dad.'"

The elder Diakite had plans for Mamadi. He got him jumping by hoisting a small toy box as high as he could and challenging the youngest of his four children to leap and hit it over and over. He also set up a nutritional plan to get him to grow.

Mamadi's mother wasn't convinced about the menu, which was a lot of dairy and eggs.

"He got tall quickly," said Diakite's mom, Aminata Kaba. "(But) I worried about his skinny waist, compared to his age. But his father told me he needs to grow up fast. He gave him a lot of that food."

A bit skinny, maybe, Diakite did have advantages. His parents, both medical professionals, had money. His father is the former director of Guinea's national pharmacies and laboratories. His mother is a specialist in obstetrics and gynecology. He grew up in the chic Conakry neighborhood of Camayenne.

Diakite's father also had contacts. He tracked down Ibrahima Camara, the former coach of the Guinea national team and a renowned basketball figure. He took Mamadi to meet him at a small sports hall next to the much bigger 28 September Stadium, the country's main soccer venue. A reminder that Diakite had chosen a sport firmly in the shadow of soccer.

"What impressed me when I met the young man was his height," Camara told the AP. "But, I said, 'Look how skinny he is.' He just smiled."

After a few practice sessions, Guinea's famous coach was doing the smiling, impressed almost immediately by the young Diakite's "sense of movement."

"I realized that he is a young person with a future. That he will go (far). His story has proved me right," Camara said. "Today, he is my pride. There are many young Guineans playing abroad but he is my pride."

Diakite was committed to his new sport. He would practice nearly every day, his father said, and when he wasn't practicing he would walk two miles from home back to the 28 September Stadium to watch games in that little hall.

While he was always tall in Guinea, at 6-foot-9 he discovered he wasn't all that big for the college game. That's when he had to do one more thing to have a shot at being successful. He had to develop a shot. And that's where those videos of Olajuwon, maybe Africa's greatest NBA player, paid off.

"I already had my footwork great," Diakite said. "It was just my hands weren't good. So I watched him a lot and started working on it, and that helped me a lot.

He's got one now and it took Virginia to the Final Four for the first time since 1984.

With only one other Guinean player in the NBA, Hamidou Diallo of the Oklahoma City Thunder, Diakite was on the way to becoming a role model back home. It's happened much quicker than expected after the game against Purdue.

"We are proud of him. He is our national hero," said Oumar Camara-Sampil, the secretary general of the Guinea basketball federation. "And this performance (against Purdue) encourages us to build stadiums, to train young people and to have a lot of Mamadi Diakites."

Just about everyone in Diakite's neighborhood, and anyone who knows him in Conakry, plans to watch the Final Four. His brother-in-law is traveling from France to be at the Auburn game.

"The people are proud," Diakite said. "They take it personally. This is bigger than basketball."

Although it's a lot to shoulder for a 22-year-old college player, Diakite's already getting a lot of attention in the U.S. and he appears to be comfortable with it.

"I just saw Grant Hill," Diakite said, "and he told me how proud he was."