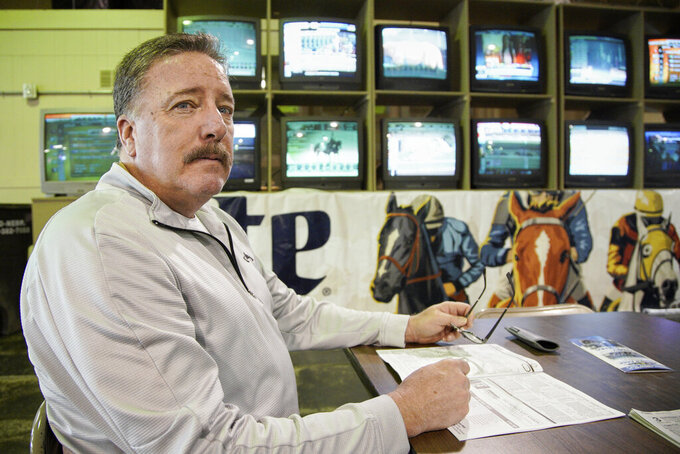 Joe Brown waits for the horses to race at Fonner Park in Grand Island, Neb., Saturday, March 14, 2020. Fonner was one of the few sporting venues in the country open to fans Saturday, unfortunately the races were called off due to dangerous track conditions following snowfall. (AP Photo/Nati Harnik)

GRAND ISLAND, Neb. (AP) — Jerry Moritz has been attending horse races at Fonner Park regularly since 1970 and almost every day in recent years.

The track in central Nebraska was one of the few sporting venues in the country open to fans Saturday, and the 73-year-old from Grand Island wasn't going to let concerns over the new coronavirus stop him from going.

“If we had a dozen people in the hospital here and two or three died, then I would probably back off,” Moritz said, sipping beer out of a plastic cup. “I feel like some people probably got it and don't even know it and are already over it.”

No cases of COVID-19 have been reported in Hall County, where Fonner Park is located, and that was part of the reason track CEO Chris Kotulak decided to allow fans for the weekend racing programs.

Kotulak said the clubhouse and other viewing areas are being cleaned with increased frequency. Leaflets reminding employees and guests to practice good hygiene were distributed on counters and tabletops in the clubhouse and other viewing areas. As an added precaution, Kotulak visited the jockeys' room Saturday morning to make sure none of the riders was experiencing any symptoms associated with the new coronavirus.

Later, jockeys voted not to race because of dangerous track conditions caused by a snowstorm that moved through the area. After it was announced that racing was canceled, about 50 people stayed at Fonner Park to wager on races simulcast from other tracks.

Fonner has been a major economic driver in Grand Island, population 40,000, since opening in 1954. The track employs 60 full-time workers and more than 200 seasonal part-timers.

Kotulak said he would have no problem with closing the races to fans if advised to do so by health officials.

Joe Brown of Grand Island, at a table in the enclosed grandstand doing some handicapping with a friend, said he wasn't overly concerned about getting sick even though he's 63 and has underlying health issues.

“I'm that part of the population that wants to worry about it,” he said. “But I kind of figured I haven't heard of anything around Grand Island yet, so maybe now will be the last time we get out in a group like this and have some fun.”

Though Moritz wasn't afraid of coronavirus, he said he does exercise common sense.

“If you see somebody that looks like he ain't feeling good," he said, "I ain't going to go over and talk to him.”

His friend, Ron Tenski, chimed in: “Like Fred Hoiberg the other night.”

Tenski was referring to the Nebraska basketball coach who fell ill during a Big Ten Tournament game and was taken to a hospital, where he tested positive for influenza A.

Tenski, 68, of Grand Island, said his wife encouraged him to enjoy a day at the races, and he also got the green light from his doctor.

“I had my physical yesterday," Tenski said, “and he said don't be afraid to be out and about.”