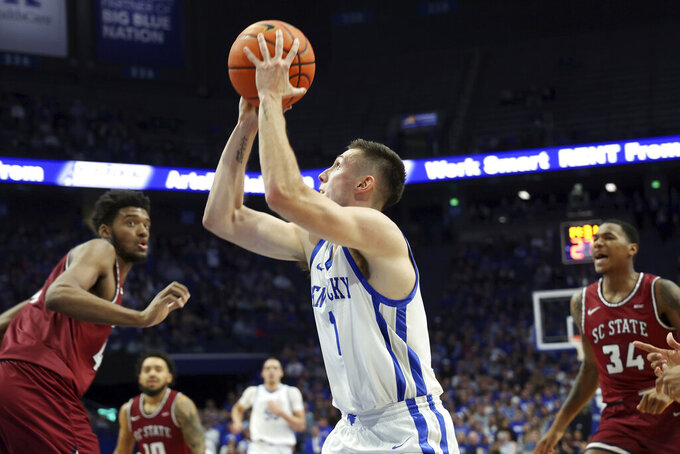 The Wildcats (3-1) easily bounced back from an 86-77 double-overtime loss to unranked Michigan State two nights earlier in the Champions Classic.

“I have a short mind,” Fredrick said. “I flushed it because I knew we had a game in 48 hours. We just wanted to get back to the way that we play — run up and down and getting stops.”

Chris Livingston scored 13 points, while Lance Ware and Cason Wallace had 12 points each. Antonio Reeves added 11 points for Kentucky, which got 51 points from its bench.

“I think it was very important (to get a win), just for the team's morale. We needed to get back, especially after a disappointing loss like that. And we owed it to the fans also, so I think it was really good,” Livingston said.

Kentucky senior forward Oscar Tshiebwe, last season's consensus national player of the year, came off the bench for the second straight game and finished with six points and seven rebounds, ending his streak of 17 straight double-doubles dating to last season. Tshiebwe missed the first games of the season while recovering from minor knee surgery.

Kentucky coach John Calipari wanted Tshiebwe to get into a flow with his teammates.

“We weren't going to play him today,” Calipari said. “The reason we played him — it's a different game for the rest of our players when he's in (the game). ... I had him out there because we need to be a team and play together. What about that makes him unselfish? Stats. I left it up to him."

Senior guard Sahvir Wheeler made his first start of the season for Kentucky and finished with six points and 10 assists. He missed the season opener because of a knee injury but has played in the past two games.

“We’re passing the ball to each other,” Calipari said. “It was a good win.”

“When you’re playing Kentucky at home, from coming off a loss, you know they’re going to be focused,” Bulldogs coach Erik Martin said. “The goal is to get through this and make sure our spirits are still up and we’re still a team. Losses can rip you apart but hopefully being on the road a lot, my team bonds.”

Kentucky: The Wildcats needed a tuneup before traveling to Spokane, Washington, to face No. 2 Gonzaga this weekend. Kentucky then plays two straight home games before flying to London to face Michigan on Dec. 4. Tshiebwe is close to returning to the starting lineup.

Kentucky: At No. 2 Gonzaga on Sunday.