Gonzaga has experience when it comes to winning at Gill 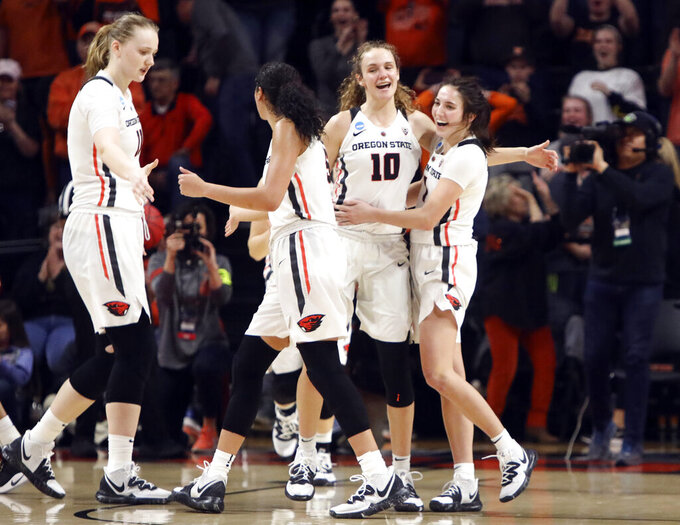 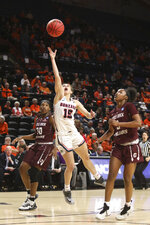 CORVALLIS, Ore. (AP) — Gonzaga has pulled off an NCAA Tournament upset at Gill Coliseum before, stunning home team Oregon State back in 2015.

The Bulldogs can find inspiration in that victory, while for the Beavers it's more of a cautionary tale, when the two teams meet Monday in a second-round match.

Oregon State coach Scott Rueck is already wary of this season's Zags, having seen them at a tournament in Vancouver, British Columbia, earlier this season.

"They know exactly who they are, they just go to their strength all the time. They're stingy on defense. It's a very simple formula that makes a great team, and it's hard to do, but they make it look easy," Rueck said.

As the 11th seed back in 2015 Gonzaga beat sixth-seeded George Washington before facing the No. 3 Beavers. The Bulldogs pulled off a 76-64 upset Oregon State at Gill Coliseum to advance to the Sweet 16, which was in Spokane. The run ended there with a loss to Tennessee.

On Saturday fifth-seeded Gonzaga (29-4) downed No. 12 seed Little Rock 68-51 in the opening round at Gill. Katie Campbell had 15 points, hitting five 3-pointers while Zykera Rice added 18 points and six rebounds.

Gonzaga is making its 11th NCAA Tournament appearance, and third straight. The Bulldogs' best finish was an Elite Eight appearance in 2011. They've made the round of 16 four times.

Fourth-seeded Oregon State's first-round game against the No. 13 Broncos didn't go so smoothly. The Beavers (25-7) eked out an 80-75 overtime win, led by Mikayla Pivec with 20 points and 12 rebounds. Aleah Goodman added 20 points.

"Getting to overtime was a challenge. I mean, we were all excited. New life. The game was 0-0. We knew we had to come out big, come out with the first punch," Goodman said.

It was Oregon State's sixth straight visit to the NCAA Tournament. The Beavers have been to the Sweet 16 for three consecutive seasons, including a run to the Final Four in 2016.

Stockton, the daughter of Gonzaga great John Stockton, was on the bench in street clothes for Saturday's NCAA opener, a brace on her left leg. Jessie Loera started at point guard for Stockton against the Trojans.

Townsend was also there, on crutches. She surprised her teammates by greeting the bus when the team rolled up to Gill Coliseum and she was waiting.

"Seeing the hard work that everyone put in, I just couldn't miss this," said Townsend, who had surgery earlier in the week.

Stockton wrote a letter to her team about what her basketball career has meant to her as the Bulldogs prepared to play in the tournament without her.

"You have always been more than just a sport. You've taught me the importance of hard work. You've pushed me past my limits and shown me that with hard work and toughness there is no ceiling. You've given me lifelong friendships and shown me that as a woman I can be strong, confident and empowered," Stockton wrote.

Both Townsend and Stockton were injured during the West Coast Conference tournament.

"They've had adversity over the past week and a half or so. And they showed they wouldn't be impacted by it. Others would step up," Rueck said.

The injuries were not the only blow to Gonzaga in recent weeks. Coach Lisa Fortier lost her brother to complications from muscular dystrophy on March 13.

Fortier left Gonzaga's bench in the final quarter of the team's loss to BYU in the WCC championship game to be by his side in the hospital.

GROWING THE GAME: Rueck spoke about how the NCAA Tournament allows women's basketball to attract more fans — even in Corvallis, which is known for its support of the sport and the home team.

WHAT'S NEXT: The winner of Monday's game will travel across country to Albany, where on Friday they'll face top seeded Louisville, which defeated No. 6 Michigan 71-50 on Sunday.